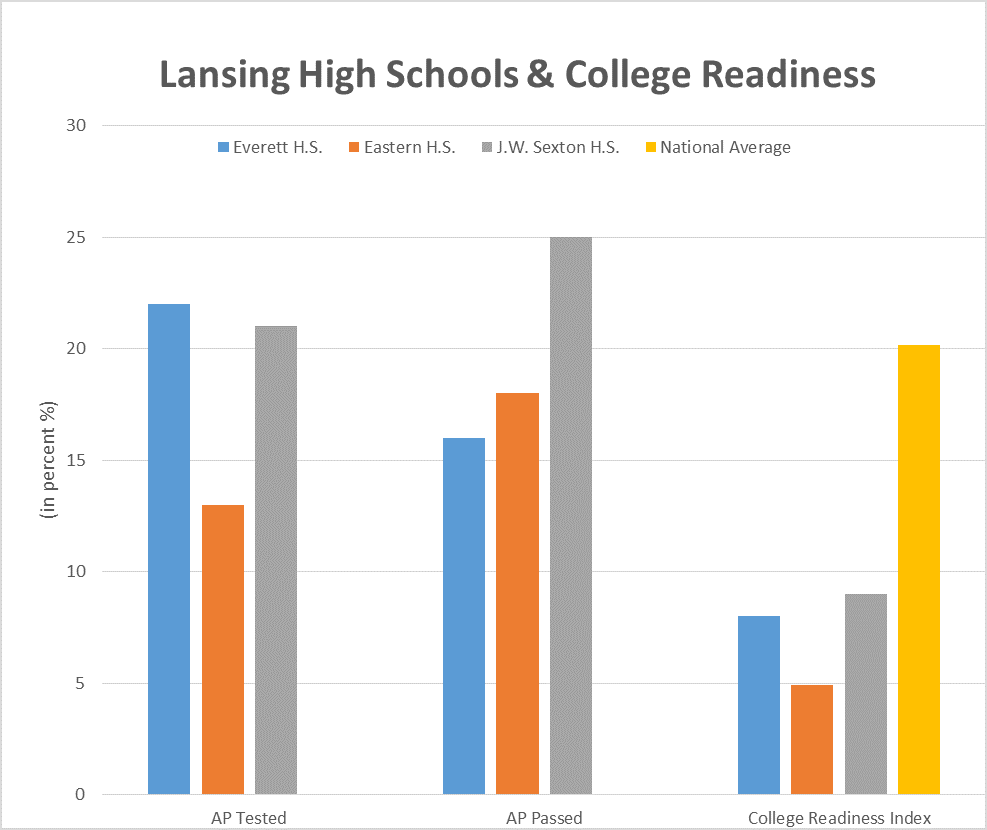 Percent of students that take and pass their AP tests in Lansing public high schools, and their college readiness index score according to U.S. News The Lansing Public School District has gained an outstanding reputation for their high schools from some. But others say the academics are as poor as Detroit Public Schools.

Michigan State University academic advisor David Williams has worked in East Lansing for over 5 years, and currently has children in high school. Due to the reputation of the high schools in the Lansing area Williams sends all three of his kids to Okemos High School. Williams said the academics and environment of some public high schools isn’t something that allows students to grow and progress positively academically.

According to Greatschools, the Lansing district (which includes all schools that are kindergarten through 12th grade) received a three out of 10 rating. Schools throughout the nation that receive between a one and a three are deemed below average school districts. The school rating service also did rating on both Eastern and J.W. Sexton High School, and they received overall scores of a three and a two.

“The system of the Lansing school district didn’t do good job preparing me for college. I wasn’t challenged enough as a student, and coming into college was an academic shock for sure,” Eastern High School alumna Tamryn Baker said. Percent of students that take and pass their AP tests in Lansing public high schools, and their college readiness index score according to U.S. News

Everett High School Principal Susan Cheadle-Holt said standardized tests and ranking based off of such test are one-sided. Students at her school and within the district could be improving in several areas and a generalized statement isn’t the best to capture that.

Besides what they statistics are showing, there is more to the numbers. Majority of Lansing high schools are in areas of poverty, 65 percent of J.W. Sexton is considered economically disadvantaged. While Everett has over 200 seventh- and eighth-graders, 1,400 9-12th graders, 350 ESOL students who’ve been in the country for very few months, while housing the district’s high school autistic program.

“We will continue to work to improve our school score card by providing opportunities for students to catch up. We are addressing the culture in the Lansing schools district as well as the academic piece,” Cheadle-Holt said. “I believe the district is making great strides in areas of academics, behavior support, graduation rate, and retaining students in our district. This is a result of the school board superintendent working together and bringing the community into the school.”

Every year U.S. News ranks the best high schools throughout the nation based on college readiness, math and English proficiency and Advanced Placement testing. They reviewed and evaluated over 19,000 public high schools and only awarded 6,218 of the highest scoring schools with a gold, silver or bronze award and yearly title of one of the nation’s best schools. None of the Lansing high schools were on this list, they were actually way below the average schools in the rankings.

The average college readiness index amongst the high schools reviewed was 20.17 in 2016, versus 19.42 during the previous year. The highest index score a school could’ve gotten was 100 based off of the school’s AP or IB participation rate, and the number of students that take and pass at least one AP or IB test before or during their senior year,divided by the number of total seniors. Taking into account how well they did on those tests as well.

These public high schools graduate at least 65 percent of their seniors, but that’s still under acceptable 68 percent graduation rate deemed by the No Child Left Behind Act.

MSU junior advertising major Antonio Clarke is stuck on his personal opinion on the school district and the high schools within it because he personally knows of success stories from these schools.

“It’s hard for me to say because I know a lot of kids I grew up with from Lansing who have been successful in college. I think it’s more of the support system it has behind it,” Clarke said. “I was in Lansing schools for most of my education and it seemed like those that struggled were just passed along and didn’t really get the extra help.”

Clarke has seen the academics work in these high schools for students, but when he went to high school his parents relied of School of Choice to allow him to go to East Lansing High School. He thinks if we went to Eastern or Everett he wouldn’t have been as successful academically.

“The only reason I say that is because when I switched to East Lansing the teachers didn’t let me slack off. If an assignment was due and I didn’t turn it in I got a zero. I wasn’t able to turn it in a month later for full credit anymore. I had to change up the way I approached school work,” Clarke said.