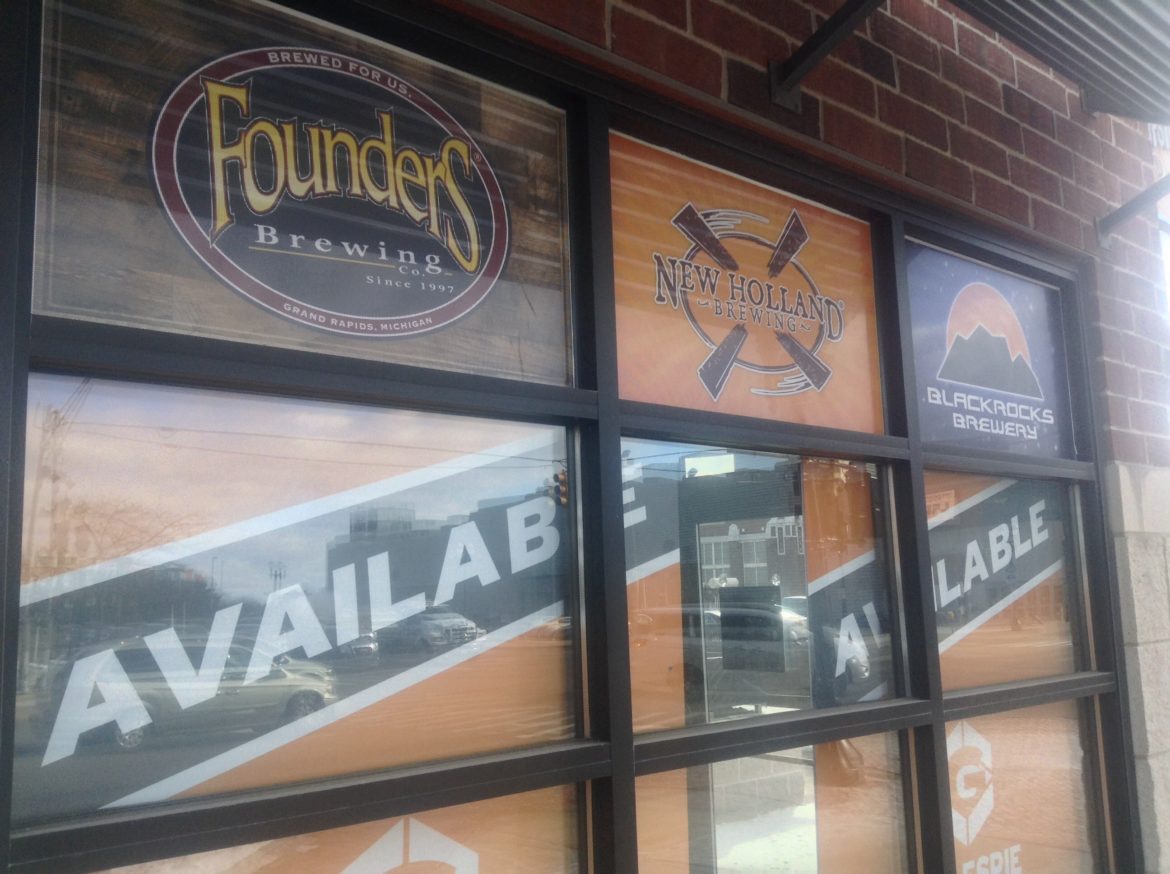 The former Beer Grotto 500 Michigan Ave. in Lansing shows off the craft beers it once served above "Available" signs in its front windows. Photo by Maxwell Evans

Marc Wolbert, playing the part of a local brewer to a T with his long beard and easygoing attitude, didn’t mince words when it came to his thoughts on Lansing’s brewery scene.

“Traditionally, Michigan runs just a bit behind the trends of Chicago, New York, the West Coast, you know, the normal taste-makers, by let’s say 10 years. Not to be mean, but Lansing proper runs a few years even slower than that.”

For the managing partner of Midtown Brewing Company, based in that very same “Lansing proper,” these are strangely pessimistic comments. Regionally, though, Wolbert’s beliefs aren’t wrong. Compared to regional brewing powerhouses Kalamazoo and Grand Rapids, which feature nationally known labels like Bell’s and Founder’s, Wolbert isn’t the only one that thinks Lansing is lagging behind.

While the State of Michigan’s website is kind enough to list Lansing as one of the “beer-centric” communities in the state (albeit towards the end of their list), it seems more like a polite gesture to the capital city than a true statement. The smaller cities and towns that surround Lansing seem to enjoy a relative wealth of microbreweries, with Mason’s BAD Brewing Company, Delta Township’s EagleMonk Pub & Brewery, and East Lansing’s Ellison Brewery & Spirits for example. Yet the city itself doesn’t seem to have the same draw. A note hangs in the door at the former Beer Grotto informing customers the business has been permanently closed. Photo by Maxwell Evans

Perhaps, because of the lack of big names in brewing to be found, residents are simply less willing to break their habits and try something new. Resident Jovi Gonzales, who says she is “really particularly fond of” Midtown, said her appreciation of the brewpub is less about their house brews and more about sipping on a regular Bud or Miller and taking in her surroundings.

“My friends say I like [going to Midtown] for all the wrong reasons,” Gonzales said. “I’m happy with a regular domestic. I just like to sit around and people watch with my beer.” A view of the bar at Midtown Brewing Company. In addition to their own house brews, the brewpub also offers food, wine, and grain alcohols. Photo by Maxwell Evans

“It’s nothing too specific. I just go there for the atmosphere.”

Gonzales also thinks the city’s proximity to East Lansing, Michigan State, and beer-loving college kids might actually be a detriment to the success of craft beer in Lansing, rather than a boost.

“We’re a college town,” Gonzales said. “Kids care more about the quantity of beer they drink than the quality.”

Sophomore Aaron Eshleman, of Kalamazoo, agrees college kids aren’t going to be the ones to bring microbrew-mania to Lansing. While as a 20-year-old he is not able to drink, he says he’s never heard any interest from his friends, which is something that differs from his experience in his hometown.

“I’ve never heard my friends say they wanted to go into Lansing for [beer],” Eshleman said. “[In Kalamazoo] my parents are big into it, my sister is, my friends are … In Lansing it’s just all bars.”

However, Eshleman doesn’t think a beer-crazy Lansing is impossible, and thinks if the city did go down that road, it would be nothing but positive. A sign outside of Midtown Brewing Company designates the business as a member of the Michigan Brewers Guild. Photo by Maxwell Evans

“I think inherent within that whole scene is a good community,” Eshleman said. “There’s a lot you can do with that that generates togetherness, like runs, fundraisers and events like that.”

“Plus, alcohol is just about the best reason to go downtown. You don’t need any real reason for people to come out if there’s alcohol there.”

Gonzales is also optimistic when it comes to her analysis of Lansing’s future brewing success.

“I think we’re working towards it. There’s been an up-spark of small local breweries,” Gonzales said. “We’re on a smaller scale but I think we can be competitive.”

Gonzales, who is from Grand Rapids, said her hometown was not always “Beer City, USA” as it’s now known. Because she moved to Lansing right around the time Grand Rapids started to make a name for itself in microbrewing, she never got to witness the economic turnaround Grand Rapids experienced, in part due to the booming beer culture. A map of the three breweries within the Lansing city limits. Map by scribblemaps.com and Maxwell Evans

“When I lived there, I was just like, ‘man, this place is bunk, there’s nothing to do,'” Gonzales said. “As soon as I moved, they started getting a lot of concerts and the craft beer scene grew.”

Even though he hopes to see the city become more established in the field like Gonzales’ and Eshleman’s hometowns, Wolbert said there’s no plan to expand his business and become a microbrewer. Citing his contentment with his current price of rent, as well as a desire to see how far he can take the concept of a brewpub, he said things at Midtown, for now, will remain the same.

“In order to become a microbrewery, we would have to fill 45 taps with our own beer and remove all of our hard alcohol and wine,” Wolbert said. “We appreciate the customer base we have, who appreciates the food and drink we offer.”