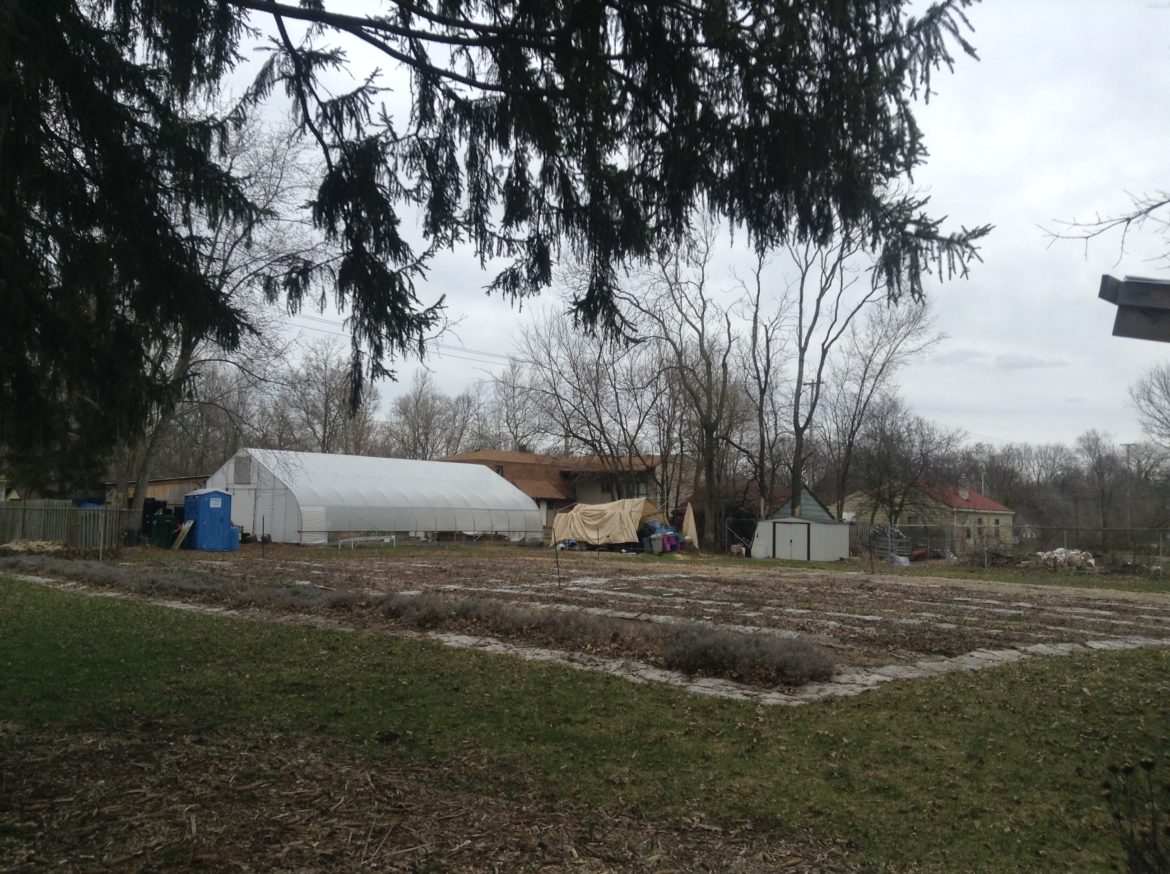 One of the plots of land on Hayford Street that Urbandale Farm uses to grow crops. The peak of Urbandale's season is late June to September. Photo by Maxwell Evans

Sandwiched between an interstate highway and a residential neighborhood stands an odd sight: rows and rows of dirt, waiting to be prepared for the growing season. This isn’t simply the work of an ambitious resident’s green thumb. This is Urbandale Farm, a slice of rural agriculture in the middle of a mid-sized city, only 10 minutes from the capitol building. A sign for the Community Raspberry Patch on Hayford Street. It is a “u-pick” patch, where community members can come and pick free raspberries to take home. Photo by Maxwell Evans

Urbandale, located on Hayford Street, is affiliated with the Lansing Urban Farm Project. Through the efforts of the Farm Project and other groups, some areas of the city have seen quite a few agricultural plots spring up in recent years. From Urbandale, which sells its crops to residents, to a “u-pick” raspberry patch open to the public, the Foster Park area of Lansing’s Eastside is one of the best examples of the growing trend of urban gardening to be found in the city.

One of the most interesting aspects of urban agriculture is that it can be an effective way of cutting down on the number of empty lots in Lansing neighborhoods. When a house is torn down, a community garden or farm on the property can prevent it from becoming an unsightly, unused lot. Caitlin Schneider, manager of Urbandale Farm, says much of the farmland is on repurposed property.

“The original field started on vacant land. I don’t think there ever was a house there,” Schneider said. “Since then, Urbandale has expanded to seven different lots, five of which have production fields on them, and most of them are on land that have had houses brought down.” A sign for Urbandale Farm’s Apprentice Lot stands down the hill from Interstate 496 in Lansing. Photo by Maxwell Evans

The land, like many of the community gardening projects in the city, is leased from the Ingham County Land Bank, a county program for managing foreclosed properties. Schneider says that her farm currently leases two acres of land from the Land Bank and cultivates about an acre of that.

Urbandale, as well as Half Barn Farm a few minutes away, aren’t just places for residents to grow crops for themselves. During the growing season, they have sold their products at places like the Allen Farmer’s Market and the East Lansing Co-op, before the latter’s storefront closed January 28.

Schneider hopes to see Urbandale expand in the future, and capitalize on Lansing’s acceptance of urban farming and plentiful unused lots. She said that because of gardening-related initiatives in the city, Lansing residents have a unique opportunity to either grow their own food or easily consume “hyper-local” food.

“There’s lots of open space here that is open for growth, and as the market demands I think we could definitely be [expanding],” Schneider said. “The garden project and the land bank make urban farming and community gardening a viable option for people.”

Farming to make money is only a part of the equation, as this neighborhood between Kalamazoo Street and I-496 also features agriculture that is purely community-based. Foster Garden has a unique concept: anyone can reserve their own a small plot that they are then responsible for taking care of during the growing season.

Whether taking care of their own plot or taking care of the garden as a whole, there are many different roles citizens can play in urban agriculture. Volunteer Alice Florida says she comes “a few times a week” to tend community gardens, and that she’s not alone.

“Various corporations even give days off for community service,” Florida said. “They’ll come out and help spread mulch and everything. These gardens are all volunteer.”

Volunteerism is a common theme among the farms and gardens in this six block area and across the city. Florida repeatedly stressed the importance of volunteer work to the success of the city’s gardens, and the effort to provide growing spaces in Lansing seems to both promote and require community involvement. One of the most unique efforts to encourage in-city farming is found at Urbandale: a six-month paid apprenticeship program offered for residents to learn to farm in an urban setting. A volunteer rakes leaves from the perennial garden at Foster Garden, in preparation for the growing season. Photo by Maxwell Evans The blocks surrounding Foster Avenue south of Kalamazoo Street are home to many different examples of urban agriculture. The pins in white represent plots of land currently being used by Urbandale Farm and as community gardens. Photo by Maxwell Evans

Laura DeLind, co-founder and president of the Lansing Urban Farm Project, thinks that the current trend in support of urban agriculture has more staying power than in the past. Citing factors like increased institutional support of local farming programs, as well as simply residents needing a source of food, DeLind said that local food and gardening has the potential to play a more significant role in American lives.

“Right now, the movement toward more local food and farming is encouraging for many reasons,” DeLind said. “Urban agriculture and peri-urban agriculture could, with time and sustainable practices, provide urban populations with a majority of their food needs.”

DeLind, who is also a Professor Emeritus with MSU’s Department of Anthropology, calls urban agriculture a “connector” between neighbors and friends that only encourages the continued growth of the movement.

“[Food and farming] connects us with a sense of self-reliance, of purpose and of social and economic possibility,” DeLind said.

Schneider agreed, saying that at the heart of the Lansing urban farming movement is “a spirit of collaboration,” and that even residents who don’t participate in the cultivation of the crops can benefit. Those who live near urban agricultural projects now have easy access to local produce.

“It can be a very good way of selling food to localized populations, especially for populations that might not have access to a lot of fresh food and vegetables,” Schneider said.

Schneider added that neighborhood residents have the ability to buy Urbandale products for reduced prices. Some of the food grown there, and the surrounding community gardens, also supports the Greater Lansing Food Bank’s Garden Project.

Julie Lehman, manager of the Garden Project, says that the goal of her organization is to not only help Lansing residents grow their own food, but also cultivate a sense of community.

“We want [residents’] time to be as much focused on growing as much food as possible,” Lehman said. “We’ve been supported by a great community for over 30 years, so our goal is to be responsive to community needs.”

Lehman, who joined the Garden Project in 2012, said the organization provides many services for interested growers, from a resource center that dispenses tools and seeds to garden maintenance. In addition, she said the Garden Project helps many Lansing-area refugees, through land access and providing seeds and plants, grow their own food to feed their families.

She said this active involvement in the community has made it easy to expand their operations organically, and bonded neighbors together over a shared love of gardening.

“We don’t have to recruit too heavily… We’ve built that name recognition, so when people think of volunteering they think of the Food Bank,” Lehman said. “Anyone and everyone is welcome, and that creates these pockets of neighbors getting to interact with each other that may not at other times.”

This article was updated to include interviews with Julie Lehman and Laura DeLind on April 6, 2017 at 8:10 pm.