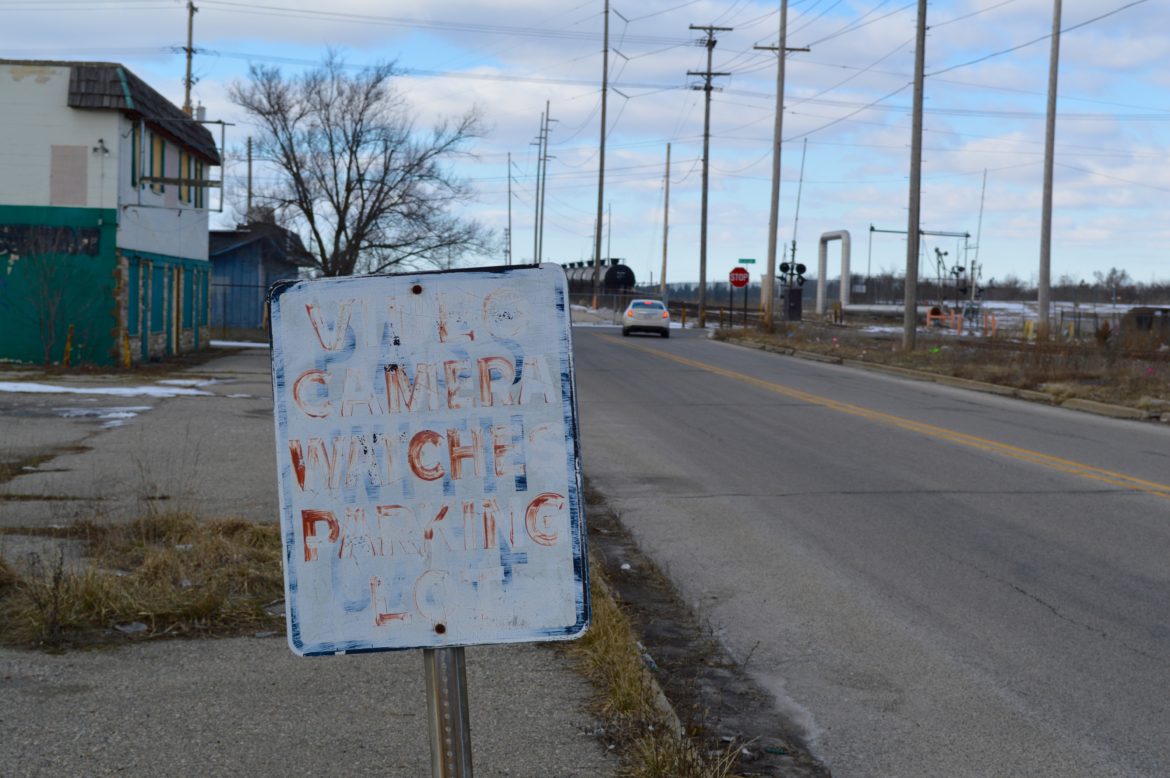 For 58-year-old Lansing Township resident Sherry Ellis, abandoned buildings impact the township’s look but not the resident’s attitudes about where they live.

The green and white bricked building located on the corner of Clare Street and West Michigan Avenue isn’t a symbol of the Michigan State Spartans. The windows are boarded up, the paint is peeling, overgrown weeds are starting to take over and the bricked walls hold nothing more than the words “Jokr,” sprawled out in purple spray paint. The vacant building near the intersection of Clare Street and Michigan Avenue is becoming a forgotten property. Photo by Hannah Holliday.

“I do think that the abandoned buildings affect how the township physically looks,” Ellis said. “But I don’t notice business [vacancies] as being a serious situation for someone not to live here. I think this is a good area to move to. It’s very much a safe and family friendly place.”

Township residents like Ellis feel that new businesses coming to the area are more likely to search for commercial space near Eastwood Towne Center, located in the north east side of the township. According to the Charter Township of Lansing Master Plan drafted in 2010 and updated in 2014, Eastwood is an additional 313 acres of land devoted to retail and service land uses.

Therefore, the west end of the township, developed in the early 20th century according to the Master Plan document, contains several abandoned buildings and vacant pavement zones near the intersections of Clare and West St. Joseph streets which go unnoticed.

“South end is not the good end,” Ellis said. “East side is the good end. We haven’t seen many new businesses on the west side of our area but we have seen things popping up on the east side.”

Businesses looking to relocate to Eastwood Towne Center are looking to keep building costs low and are interested in new building structures. Lansing Township Supervisor Diontrae Hayes said that a lot of things are in the works at Eastwood, including the new development of another hotel, the Hilton Homewood Suites.

Justin Hollander who is an associate professor of Urban and Environmental Policy and Planning at Tufts University, said after 30 years both commercial and residential buildings need to be rebuilt. For developers, location is a huge deciding factor. A vacant building sits near the intersection of Clare Street and Michigan Avenue. Photo by Hannah Holliday.

“Let’s say someone wants to put in a new pharmacy,” Hollander said. “They look at that old building that hasn’t been taken care of in say 50 years and they look at what it’s going to cost them to take care of that, to renovate it. And then they look at this other area where there are lots of pros and they are looking at a brand new building and my guess because of the location, it’s probably less expensive. So, they probably just move there and so that one decision by one pharmacy magically happens and then dozens and dozens of companies start to have that effect on them.”

These vacant commercial spaces can also impact more than just local residents but also businesses owners who are located in close proximity to vacant lots since it reflects low community morale.

Bichnogoc Ngoc Tran has been working at his wife’s small business, Nu the Tailor, for the past 21 years on the intersection of South Waverly Road and West St. Joseph Highway. He has been around long enough to see the area change, but says that business hasn’t been effected by the area’s vacancies since his wife’s store has gained a strong customer following. Although, he has noticed the increasing number of nearby vacant store fronts and lots.

“We got one [abandoned building] here and then another one in this other building near us,” Tran said. “My community, they are like my family. We know our community and all the people knew us when our kids were babies. We are still around because of loyal customers.”

Hayes said in late January that there are no concrete plans for new retail stores on the west side of the township, but that new industrial businesses located near the two vacant General Motors plants are starting to sprout up, including a trucking company. “In the township’s regional industrial corridor which is located closer to 496 and Rosemary, there were all these buildings impacted by GM,” Hayes said. “Anytime a major manufacturer comes in, you’re going to have smaller businesses that are suppliers or little businesses that are off shoot because GM is here. They were very impacted by GM vacating. A lot of that was desolate.”

Even though these abandoned properties aren’t immediately affecting all businesses located on the west side, such as Burger King, Spud’s Diner and Quality Dairy Store who all have a steady flow of foot traffic, a possible future impact could be probable.

“You certainly tend to have in most commercial districts an agglomeration effect,” Hollander said. “The more commercial activity you have, the more concentration the more they kind of feed into each other, stimulating growth. The reverse happens as well, so when you have situations when you are losing businesses and growing sparser and sparser, then that contributes.”

According to the township’s master plan, five percent of the existing land that could be used for potential development was paved and open vacant land as of 2009. A pie chart of the existing land use by % of total development land used in the Charter Township of Lansing Master Plan 2009 document. Photo by Lansing Township Assessor’s Records. Map of the Lansing Township existing land usage legend. Detailing the areas of vacant open and paved land. Map produced by the Charter Township of Lansing Department of Planning + Development.

In addition to the township’s existing vacant lots a 121-acre property where the Waverly Golf Course once stood is also vacant.

“The golf course is a very interesting entity because it belonged to a private family who left it in trust to the City of Lansing, but it’s located in Lansing Township,” Hayes said. “We want to develop it into something.”