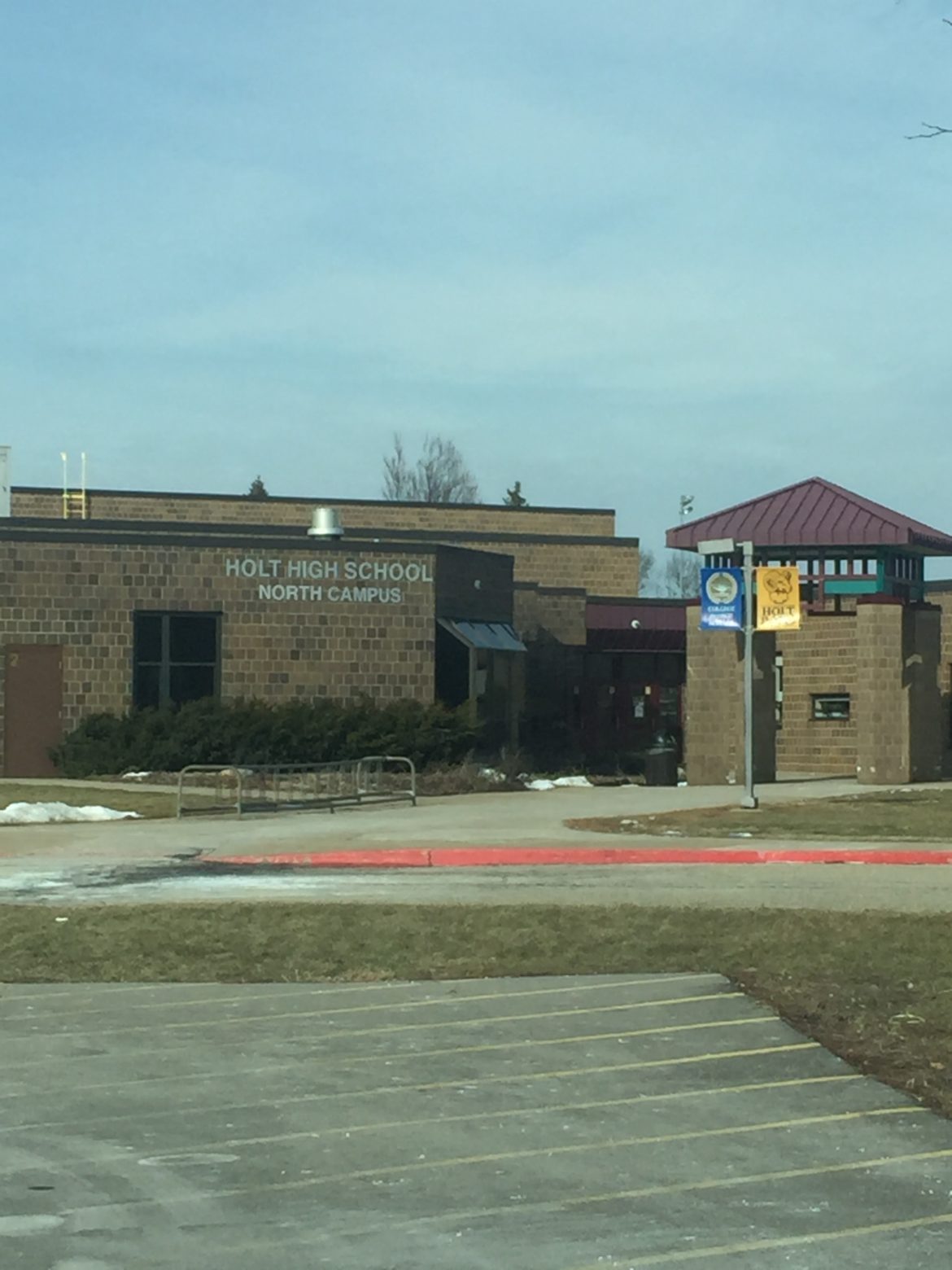 The Holt High school North campus building on Feb. 10, 2017. In March it will be three years since the seniors switched from the main campus building across the street to this building. The Holt High school North Campus building on Feb. 10, 2017. In March it will be three years since the seniors switched from the main campus building across the street to this building. Photo by Claire Barkholz.

Three years ago the Holt Public Schools made a building switch and had the seniors move from the high school main campus building over to what used to be the ninth grade campus building across the street, referred to now as the North Campus building.

This change in buildings became notoriously known as “the switch.”

According to Holt High School Principle Michael Willard, the campus switch caused a lot of distrust from the community, and made people question a lot of other policies and rules set in place by the school.

Time has given way for the rearranging to settle down and become the norm for the current Holt senior students and staff.

“Three years later and our data from surveys and focus groups indicates that the students love the new configuration of our high school, and the teachers support the change,” said Holt Public Schools Superintendent Dr. David Hornak. “With that, each year the data continues to demonstrate more support.”

While the change has become the norm, that doesn’t mean that there still aren’t kinks in the system that need to be worked out.

“I have first and sixth hour at the main campus and I don’t like driving back and forth mainly because the schedules of the two buildings are different so it’s kind of weird,” said senior Holt student Alaina McFarland. “After first hour the traffic to get across the street is busy so I have to leave class early to avoid it, if I drive.” McFarland’s class was the last freshman class to be in the North Campus building when it was a ninth grade campus.

“When they first brought the idea up about the switch they already had their minds made up that the switch was happening,” said McFarland. “I think they did not transition it well because a lot of people in the community were against the switch and had a lot of questions that the school could not answer at the time. And for making a big decision that revolved around the students and teachers they didn’t involve the students, staff, or members of the district with the decision at all which was the main problem.”

The reason for the “switch” was explained in the Holt Public Schools newsletter segment called “Reinventing Holt Public Schools” sent out in March 2014. It explains that with the decrease in school funding in Michigan combined with the declining enrollment, it has led many districts to lay off staff or start closing buildings. So the switch was put into place as a way to balance both academic achievement and cost efficiencies. “It is my opinion that the students, the vast majority, have acclimated nicely and appreciate the quiet and the clam of the smaller campus,” said Holt High School teacher Erin Umpstead. “Some of the adults on the faculty and in the community seem to be a little less acclimated and still want it to change back. They feel it is not drawing people into Holt, as was hoped. I believe that many of these adults are not aware of the culture and programs at the North Campus, and might warm to the senior campus more if they were to visit and learn about how we are preparing seniors for college and life after high school.”

Associate professor in the Department of Teacher Education at Michigan State University, Kyle Greenwalt, studies school curriculum by exploring teacher-student-parent relationships and the factors that have shaped those relationships over time.

“If parents feel that the school does not take into account their wishes for their children, they might move them to another public school in a different district, into a private alternative, or homeschool them,” said Greenwalt. “Under current federal policy, parents are positioned as consumers within an educational marketplace.”

Ironically the parents rather than the students and staff have seemed to have the hardest time with the “switch.” The school board realizes these concerns from the parents and is addressing them.

“We have established robust communication networks including a weekly email blast and opened Facebook, Instagram, Twitter, and Tumblr accounts to share our news,” said Hornak. “Our transparent communication is helping to rebuild trust across the district regardless of the concern.”

McFarland and her fellow senior classmates have experienced their first year and last year of high school in the North Campus building and have come to accept the building switch as reality.

“Overall I like having class at the North Campus. It’s really chill, everyone knows each other, and overall as a big class I think its made us closer,” said McFarland.