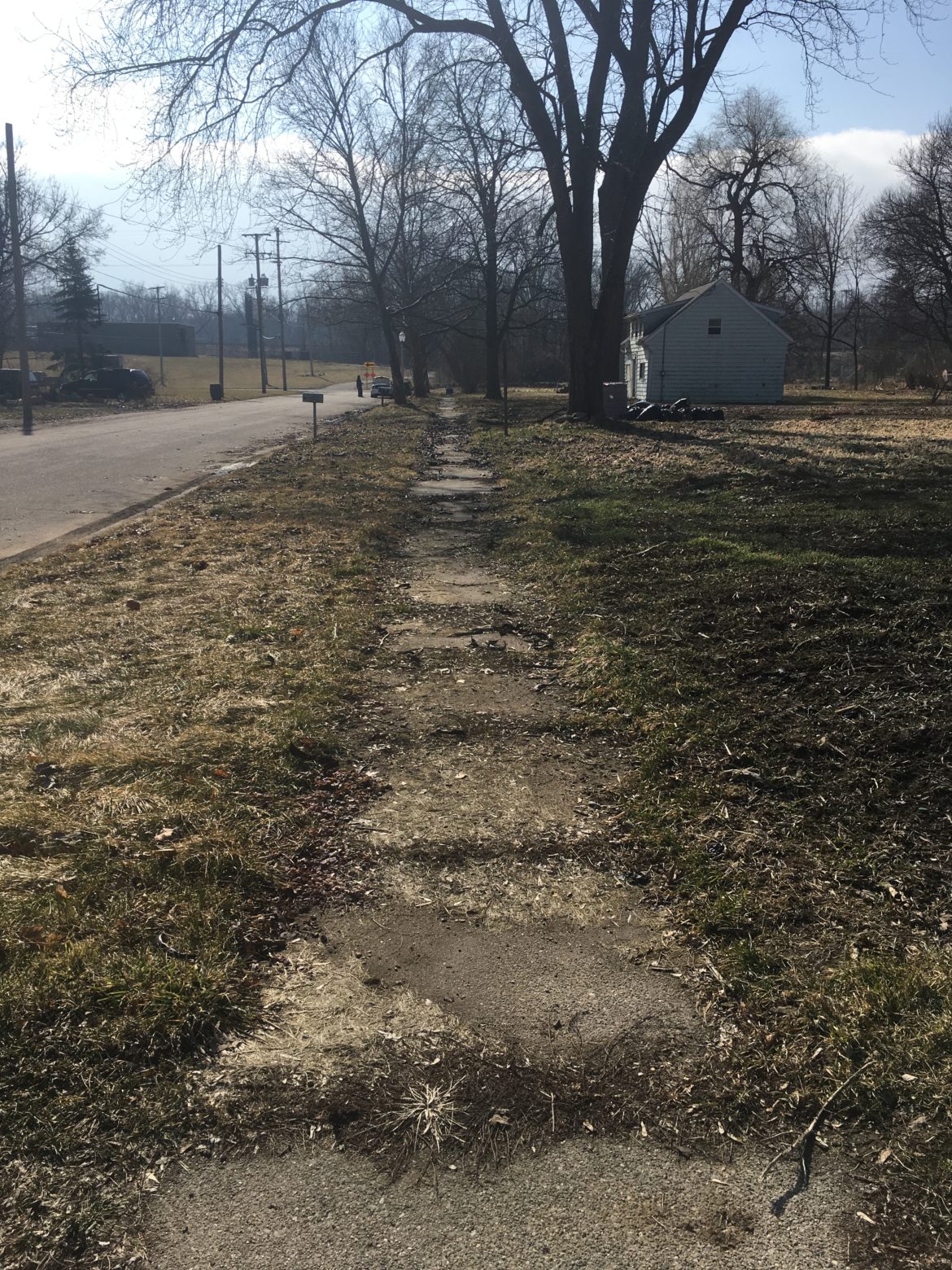 A stretch of sidewalk at the 500 block of Charles St. in Lansing Township, Mich. According to the 2015-2024 Comprehensive Sidewalk Plan, Charles St. is not scheduled for renovations. Photo by Casey Harrison. A stretch of sidewalk at the 500 block of Charles St. in Lansing Township, Mich. According to the 2015-2024 Comprehensive Sidewalk Plan, Charles St. is not scheduled for renovations. Photo by Casey Harrison.

In front of 642 Mifflin Ave., 28-year-old Devon Williams can be found fixing up his silver sedan — dinged and dented up from years of wear and tear from the road and parts of the front bumper torn off from driving over potholes or uneven surfaces.

Living a safer life than he did four years ago in urban Chicago, Williams is still facing the dangers of obsolete infrastructure. His driveway is made up of dirt and gravel, it’s flooded because of a faulty sewer system. The sidewalk that runs down his street is non-existent on the other side of the road.

But because of a zoning technicality, his house is in Lansing while the street he lives off of is located in Lansing Township and because of that could not reap the benefits of the township’s 2015-2024 Comprehensive Sidewalk Plan — a decade-long millage project passed by voters on Aug. 5, 2014, dedicated to repaving run-down sidewalks, or construct stretches of sidewalk where there currently is none. A silver Dodge Stratus sedan owned by Devon Williams, 28, of Lansing, Mich. in front of 642 Mifflin Ave. Williams said shoddy infrastructure is the reason his car is missing parts of the front bumper. Photo by Casey Harrison.

The plan, prepared by the Lansing Township Public Works Committee, states approximately $124,000 will be collected in taxes as a result of the millage and will be divided between sidewalk repair and replacement and local road repairs until 2024.

According to Lansing Township ordinance, sidewalks that require repair must meet the following criteria before action is taken:

Lansing Township Supervisor and Public Works Committee member Diontrae Hayes told the Lansing Township News renovations are ahead of schedule, as the Edgemont and Ravenswood subdivisions on the township’s west side and the first two districts stated in the plan have already been completed.

Districts 5 and 6, both located on the southeast side of the township, will be moved up as the next priority for the township, according to Hayes.

“We are ahead of schedule, but right where we need to be,” Hayes said. “Since we have been west for two consecutive years we’ve decided to break this up a little bit and head over to the east side.” The southeast side of Lansing Township, known as district 7 in the 2015-2024 Comprehensive Sidewalk Plan. The pin drop on the map is known as 642 Mifflin Ave., Lansing, MI 48912. The area shaded in green is land that belongs to the city of Lansing. Plans for repairing district 7 aren’t scheduled until 2024. Screenshot courtesy of Google Maps.

For Williams, and other residents in or near the fragmented southeast sector of the township, improvements aren’t scheduled to be made until 2024 — and those renovations are labeled as the Eastside Commercial district.

According to the plan, the primary objective of the project is to replace the sidewalks that are the most deteriorated first, as the last time any sidewalks underwent maintenance was in 2001. And although $124,000 may seem like a significant figure, it may not be enough to completely encompass the ambitions of the township in the long-run.

“You’re not going to buy a whole lot of sidewalk for a buck and a quarter,” Richard Little, a retired professor and former Director of the Keston Institute of Public Finance and Infrastructure Policy at the University of Southern California said. “The truth of the matter is is it’s not a lot of money to buy sidewalk. There are real physical limits on the money you can spend on infrastructure.”

As for the roads, Hayes said whatever funds allocated to repairing roads would be matched by the Ingham County Road Commission. According to the 2015-2024 Comprehensive Road Repair Plan, the township could finish its road construction agenda by as early as 2020. “There’s a lot more ways for things to go wrong with a roadway pavement, which is why they break up,” Little said. “Unfortunately they tend to do that on the cheap because people like to see a lot of new highways or reconditioned highways. The best way to do a lot is to do it cheap. Then, of course, you keep doing it over and over. Sidewalks if they do it right, 25-30 years, they’re going to last even in a harsh climate, they’re probably putting in four inches of concrete over a couple inches of stone. That will last a good long time.”

Despite the township’s new plans for infrastructure leaving out Williams and residents in a similar situation, he’s happy Lansing Township, and the surrounding area is a safe community.

“It’s better where I come from, but at least you can breathe air instead of watching your back every five minutes and the next thing you know you see a dead body or somebody is getting killed,” Williams said. “I like it and I can raise my family here. It’s a good area but these communities need to come together and fix up everything and help the community.”