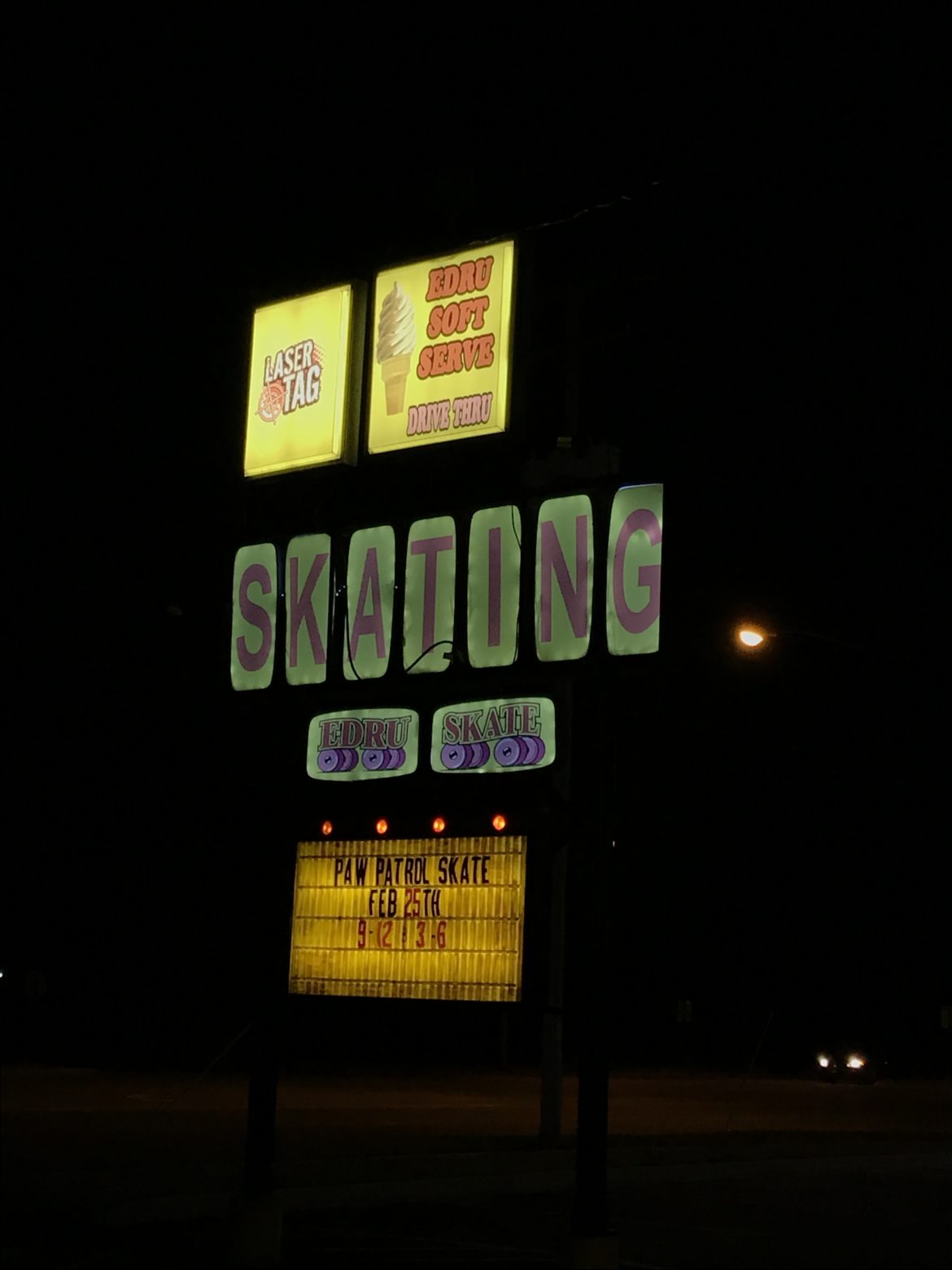 The Edru sign lit up at night on Feb. 20. Edru is located 1 block south of the Cedar St./Holt Road intersection. Photo by Claire Barkholz Animals line the top of the Edru building. These animals were from the miniature golf course that were in the skating rinks place before Edru. Photo by Claire Barkholz.

“I was basically born on skates” is the first thing Edru Skate A Rama’s employee DJ said as he pushed off one roller blade and skated back behind the DJ stand.

He changed the song from throwback Britany Spears to a more up-to-date Justin Bieber chart topper, and then got out on the rink and started skating with the customers.

The big zoo animals that line the top of the Edru Skate A Rama Roller Skating and Laser Tag center building have been a key landmark in Holt since it opened 60 years ago.

In the past, it was the place to hang out at on the weekends. Times have changed a little since then.

“I can remember there being like 400 or 500 people here when I was a kid,” said Edru employee Hailey Magwood. “These days, even on Saturday’s which is our busiest day, there’s not nearly that many. I think it’s probably because of the era.” The Edru roller skating rink on Feb. 20. Edru had an extended evening skate in honor of Presidents day. Photo by Claire Barkholz.

Edru’s general manager, Jackie Cortez, explains that never have they had any worries about going out of business.

“We are actually within the last couple years starting to pick back up,” said Cortez.

In order to increase interest and business, Edru does partnerships with local schools by having skate nights for some of the elementary schools, and also having discounted prices and extended hours on school holidays.

“Saturday nights in the winter season are usually our busiest of times,” said Cortez. “Our main demographic is probably the 11-15-year-old age group.” Birthday parties and private parties are the popular thing here at Edru, but local kids and adults alike find it as more than a party place, they find it as an escape.

“I’ve worked here since the beginning of January, but I’ve been skating here since I was a little girl,” said Magwood. “I’m here three to four times a week with my kids. If I could be here full time I probably would. I have a regular full time job, I come here to relax.”

Magwood explains that there are a handful of regulars that hangout at Edru throughout the week, including her own kids. So she has taken on the role of becoming the mother-like figure at the rink.

“A lot of the everyday kids here call me mom,” said Magwood. “We know exactly who the regulars are. If they get hurt of have an issue, they come to me.”

Caring and passionate employees is what has run this roller-skating rink since the time that it was bought and transformed from its original mini golf course.

“Ed and Ruth Core were the original owners,” said Cortez.

Why the name Edru? The original owners’ combined their two names together and it became the company name. The Edru sign lit up at night on Feb. 20. Edru is located 1 block south of the Cedar St./Holt Road intersection in Holt, Mich. Photo by Claire Barkholz.

“They were champion skaters, always participating in competitions,” said Cortez. “They were really in it for the health of it, and I think that’s what they really tried to promote with this place.”

While business may fluctuate from year to year with the changing interests and busyness of the youth, Cortez is confident that Edru Skate A Rama is here to stay.

“Roller-skating won’t go away,” said Cortez. “I think because it’s healthy. I know I skate for the health of it.”