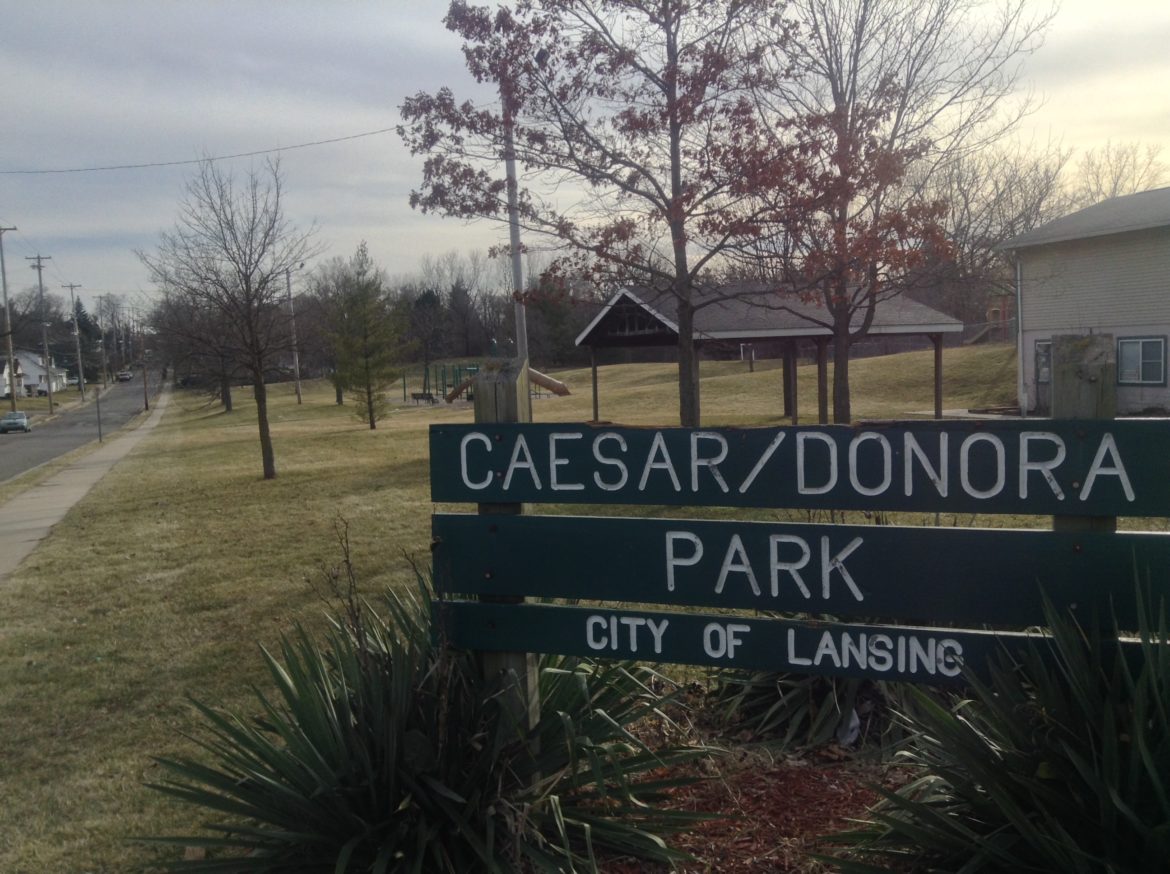 Caesar/Donora Park in Lansing’s Baker-Donora neighborhood sits empty in the middle of the day on Monday, Feb. 20. Photo by Maxwell Evans

It’s 4 pm, with plenty of time before the February sun sets. It is 59 degrees out, warmer than it has been in months and an unbelievable temperature for the middle of winter. And it is President’s Day, so students of Lansing School District are out of class for the day, free to be outside enjoying an excellent collaboration between nature and the school calendar.

Yet at Caesar/Donora Park, in South Lansing’s Baker-Donora neighborhood, there are only a handful of children on the playground and even fewer playing in the streets. For an almost-entirely residential neighborhood in Michigan’s capital city during an unexpected heatwave, the silence surrounding the park is almost eerie.

Given the surrounding area’s reputation as dangerous, perhaps the lack of activity should come as no surprise. Baker Street, which serves as the northern boundary of Caesar/Donora Park, anchors a particularly troubled area. Forty-two violent crimes have been committed within a half-mile radius of Baker Street since the beginning of 2017, according to the Lansing Police Department’s crime map. This compares to nine within the same radius of Gier Street on the north side of Lansing, or seven around Cavanaugh Road in the south of the city, for example. Despite the statistics, Baker Street resident Martha Barner has absolutely no problem living with her family in an area widely assumed to be unsafe.

“Sure, there might be folks who joke, drink, play loud music and all that … but it’s a nice neighborhood,” Barner said. “You could fall asleep on the porch and stay there all night and you’d be okay.”

Barner, 47, believes that the bad reputation her neighborhood has gotten is more a result of the way things used to be than the way they are now. Taking multiple breaks to speak with neighbors that passed by her front porch, she repeatedly referenced the well-being of many children and babies who grow up in the area, and claimed that even in the past, gang activity wasn’t the source of too many problems.

“Individual people caused all that trouble back in the day, not really any gangs,” Barner said. “Everybody knows everybody around here, so it wouldn’t be smart to cause any trouble like that.”

That small-town, everybody-knows-everybody feeling is something Eastside resident Nancy Mahlow agrees can help to limit violent crime. Mahlow, the president of the Eastside Neighborhood Organization, says that when it comes to stopping crime from overrunning a neighborhood, communication is key.

“[The ENO] is one of about 40 neighborhood groups and 100 neighborhood watch groups in Lansing, and we all communicate with each other,” Mahlow said. “We share information with the community policing officers, and they are quick to respond, right down to a simple question.”

Jodi Lane, a professor with the University of Florida’s Department of Sociology and Criminology & Law, said that neighborhood associations can be effective in deterring crime, but that this depends on how active these organizations actually are.

“It depends on … their ability to connect and mobilize and watch out for each other and take action,” Lane said. “In areas where there is active and focused police enforcement coupled with neighborhood watches and associations that are active, this collaboration can make a difference.”

Mahlow believes her organization is active enough to create change in the community, and that the communication between police and residents is one of the strong suits of her neighborhood.

“Neighborhood watch groups [in Lansing] are the eyes and ears for police,” Mahlow said. “Residents know they can contact the police for anything, even trivial matters.” The intersection of Vine and Rumsey Streets on Lansing’s Eastside has yet to see any reports of violent crime yet in 2017. Photo by Maxwell Evans

Despite Mahlow’s efforts, her neighborhood is no stranger to recent violence. On Feb. 11, one man was killed and two others were shot on the 1600 block of Kalamazoo Street. This was Lansing’s fourth reported homicide in the first two months of the year.

Michigan State University sophomore Rachel Zemla, who lives three blocks from where the murder took place, said she was “pretty scared” after learning that police showed up to the scene five minutes after she left for work that day. She says that, living costs aside, she would rather live in East Lansing instead.

“If I had the choice, I would live in East Lansing because you’re surrounded by people your own age and it feels much safer,” Zemla said. “You don’t get the same feeling of community that you get in East Lansing.”

Mahlow believes that despite what happened on the 11th, there is no reason for students to fear living in Lansing because of that same sense of community Zemla feels is lacking.

“Violent crime is going to happen anywhere,” Mahlow said. “The fact that we can catch the individuals [that commit crimes] is because of the communication we have in our neighborhoods.”

Fellow Eastside resident Meredith Peltonen, who moved to the Lansing area from Metro Detroit to attend MSU, said that she too once feared living in the city. However, Peltonen now believes anyone who feels how she once did is unfounded in their beliefs.

“I used to think Lansing was scary because I do feel like there’s a stigma attached,” Peltonen said. “But that was also 12 years ago … It’s a misconceived notion that [the city] is not safe.”

Peltonen, who admits she “lives in a bubble” in the vicinity of her house on Rumsey Street and doesn’t often go much further west than the Capitol building, wants to believe that events like the death on Kalamazoo are isolated incidents and not signs of a trend. She hopes that the city’s commitment to redevelopment will begin to affect how other Spartans view her city.

“Their plan seems to be to develop from the [Michigan State] campus to the capitol,” Peltonen said. “I think that will help the reputation, not having so many abandoned buildings and what not. My family’s been at this house for 15 years and there’s been a few car break-ins, but that’s about it in terms of things that are violent or alarming.”

While Lansing is far from a violence-free zone, residents seem to acknowledge that Lansing has its issues, but for the most part, don’t let what they see as typical city crime affect their long-held beliefs.

“I’m proud of our city,” Mahlow said. “It’s not perfect, but I wouldn’t want to live any place else.”