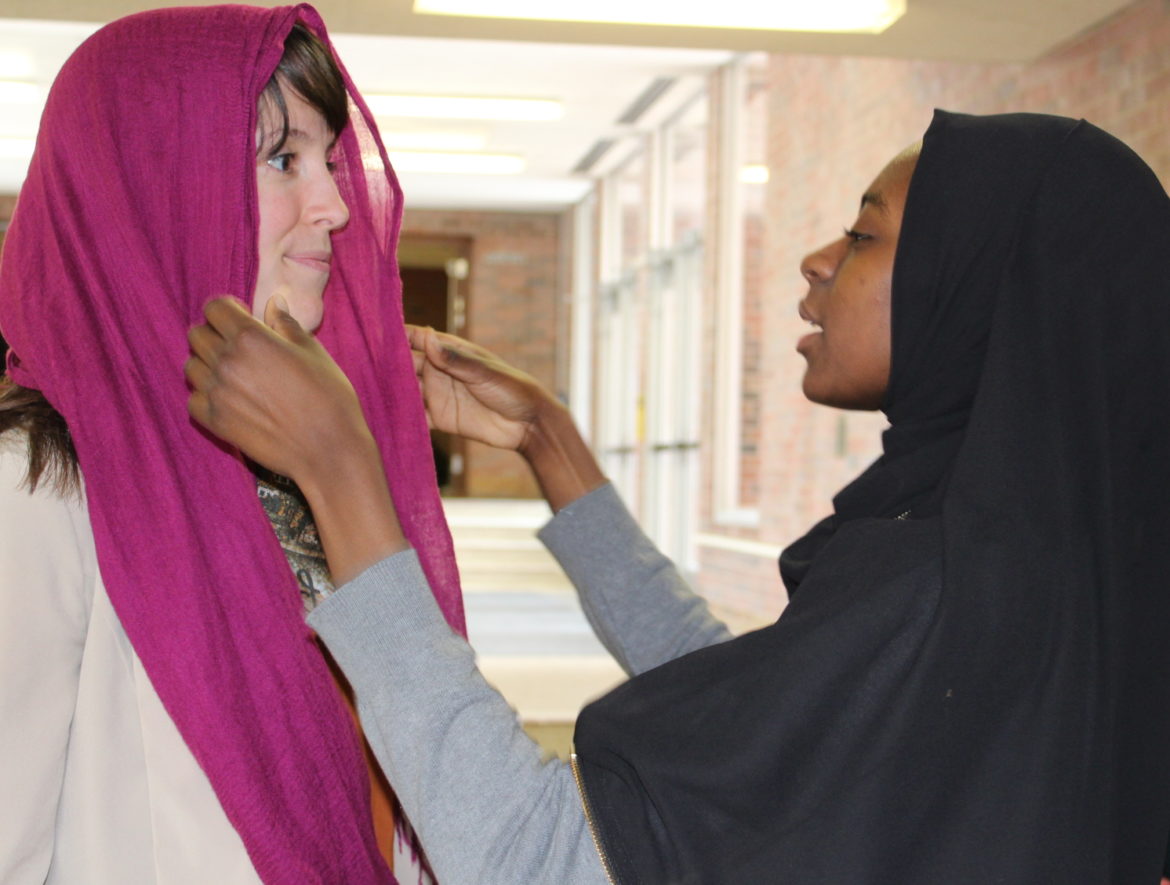 Jessica Scott-Nehls, an advisor from the MSU Office of International Students and Scholars listens to Hauwa Abbas talk about the hijab. Several Michigan State student groups teamed up at Wells Hall Feb. 1 on World Hijab Day to ask people a simple question: “Would you like to try on a hijab today?”

Armed with colorful scarves, the Malaysian Student Organization of MSU, the MSU chapter of Project Nur, and the Michigan State Muslim Students’ Association tried to engage people and defuse prejudice against Muslim women.

The hijab can be misunderstood. As the nation debated a presidential order barring immigrants from seven majority Muslim countries, Project Nur member Anisah Al-Qadi said she volunteered at the event to share her side of the story.

“A lot of people when they see the headscarf, they think oppression, they think discrimination, they think of someone being forced to do something they don’t want to do,” said the MSU neuroscience senior. “While in reality it’s a symbol of power and faith.”

Hauwa Abbas, of the MSU Muslim Students’ Association, said many people believe Muslim women are forced to wear hijabs. She said most women are not forced to cover, but that those who are have to because of where they live or because of the culture around them.

“The hijab should not be worn that way,” she said. “It should be worn because you believe truly it is the correct thing to do.” Gesturing at her own hijab, Abbas said, “It identifies me as a Muslim woman, it shows that this is my relationship between me and God. I’m covering for him. I’m covering because I believe that a man should respect me for my personality and my character rather than my beauty, that no matter what, I can be covered in this society and still be respected like anybody else.” Instead of letting differences divide, several people stopped by the table for a brief history of the hijab and a chance to put one on. They were then shown themselves in a mirror and encouraged to write down the thoughts they had when they tried on the hijab.

Not seeing her hair was a new experience for Christian O’Keefe, one of the people who took on the challenge. She said she takes a lot of pride in her hair and was surprised to find herself just as beautiful with a hijab on as without one.

“I think religion should be protected, not necessarily that it should be part of our political climate or a part of legislation but, I think it’s important to appreciate the variety and diversity of religion in the U.S..” said O’Keefe. “It should be represented and people should be free to represent that part of themselves.” Signs at the World Hijab Day project at Michigan State.

Explaining that she hopes to gain an appreciation for all cultures and religions, anthropology student Jacqueline Boger tried on a hijab to experience a new perspective.

“It’s an important part of who they are, it’s not something you should have to hide.” Boger said. “I’m Christian and religion is a really touchy subject for a lot of people and it shouldn’t be that way.”

How many Muslim in the U.S. where headscarves? Find about this and more in the MSU guide “100 Questions and Answers About Muslim Americans.”

Anna is an environmental journalism student at Michigan State University and a writer for MSU's student run publication, VIM Magazine.