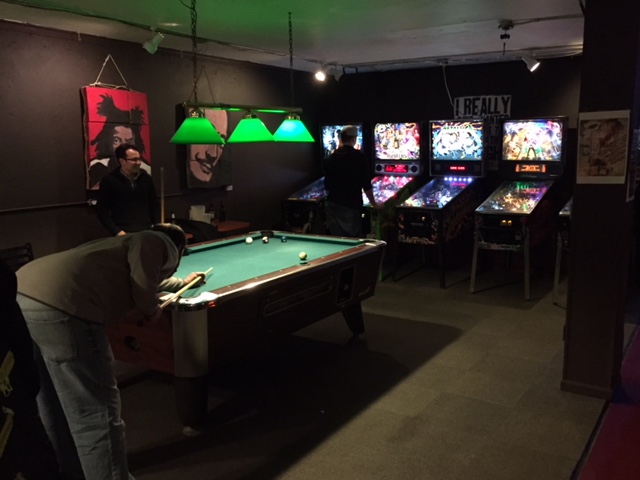 A bartender pours a beer in downtown Lansing. Photo by Zachary R. Sgro

The city of Lansing is best known for being the capital of Michigan, and just a stone’s throw away from Michigan State’s campus. If you live in the area, then you know many of the people that work downtown typically leave the city once work gets out.

“A lot of times I think the Greater Lansing area has a hard time making sure that Michigan is a great place to live,” said Bill Kimble, president of C2AE architecture and engineering company in downtown Lansing. “A lot of us have families here, but sometimes that’s not enough.”

Locals like William Davis believe that bringing in more young people will rejuvenate the city helping it bloom into something great.

“It’s so quiet during the winter, there’s times where I want to scream because it’s so quiet!” Davis went on to question how Lansing’s ability to maintain relevancy. “From oh, middle of November to early March, there’s nothing going on! I don’t know how you keep bright educated people in the area, you can’t.”

That’s where people like Kimble step in. Kimble is also on the Michigan Works Redevelopment Board, which recently started the 5:01 initiative program to connect interns with each other and the community. However, programs like 5:01 are only half of the solution, which is where bars like The Avenue Cafe come in. Starting as an internet café and eventually forming into a smokehouse, ramen kitchen, music venue hybrid monster, The Avenue has found a way to thrive over the years. When asked about how it has been able to maintain success at such a consistent rate while being such an inconsistent place, bartender and long-time customer Dani Raymond said it best, “Magic, simply magic!” The Avenue has certainly found a winning formula as it has become one of the hottest spots in downtown Lansing.

A constant flow of fresh ideas and new promotions helps bring in people after work gets out. Between the rotating drink deals, weekly events, and artistic expression, places like the Avenue act as a sanctuary for the younger crowds around Lansing.

“Music and the atmosphere really bring us out here,” said Ian Engle, regular at The Avenue. Noah Benallack, self-proclaimed regular drunk, had this to add, “But the restaurants and good prices have been bringing in more business. The people rotate faster than the craft beer does.” It’s not all about being trendy and new for these patrons, when it comes to enjoying their night life. The issue that really echoed through-out Lansing dealt with bar’s and other businesses giving better deals and more affordable nights out on the town. It’s about engaging the younger crowds and getting them involved.

When asked about where businesses need to focus Kimble had this to say, “Really trying to engage those people while they are here, during their internships, and over the summer time, that’s the important thing.”