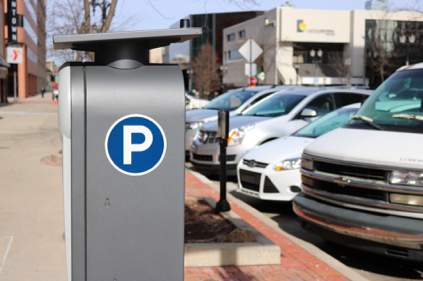 The question of where to park goes through everyone’s mind when going out, and visiting downtown Lansing is no different. Between parking meters, ramps and lots, people still struggle to find a space to park.

Lansing resident Sheri Buck works downtown five days a week and parks in a meter all day. Buck said that if she does not get there early in the morning, she would circle the block multiple times before finding a spot.

“The biggest inconvenience is having to run out every two hours to feed the meter,” Buck said. “They need to sell parking passes. They used to do that for the meters; you could pay the meter per day.”

Buck is not the only one to want more accessible and convenient parking downtown. Tameko Richard, owner of Juice Nation in downtown Lansing, said it is not difficult for her to park because she has a monthly permit in a parking garage, but would like to see more on-street parking. A few blocks downtown have meters that you can pay for using a credit card, and she said she would like to see every block have that convenience.

While parking may seem expensive and inconvenient for some business owners and employees, it does not seem to be a problem for others who visit and work downtown.

Laurie Nevin does not frequent downtown often, maybe once a week, but she does not have any complaints with parking other than making wider spots.

Shelley Speiss does frequent the downtown area and still has no complaints. Speiss parks five days a week in the Constitution Hall Parking Ramp; a permit lot for $90 per month. Graph includes total revenue and expenditures for the Municipal Parking System Enterprise Fund for the fiscal year of July 1, 2016 to June 30, 2017. Graph by Emily Lovasz. Data from the city of Lansing fiscal year 2016 to 2017 Executive Budget Recommendation.

Available parking in a city is important, but it comes at a cost. Kenneth Boyer, professor in the Department of Economics at Michigan State University and expert in Highway and Transportation Funding and Transportation Economics said that most parking loses money. In order to make an investment profitable, they have to charge more.

Director of Parking Services in Lansing, Bob Johnson said that it costs approximately $20,000 per space to build a parking structure and over $1 million to fix ramps and lots that have already been built. Therefore, it is important to look at the bigger picture.

“We have an entire system. A system that is comprised on street parking meters, parking lots, and parking ramps. When one takes a huge hit, the system has to carry,” Johnson said.

While $90 a day at one of the Lansing parking ramps such as North Capitol Ramp may be expensive to those who park downtown frequently, lowering the price would mean no new structures in the future and not enough funds for upkeep of the existing ramps and lots. It may not be entirely possible to make parking cheaper or to build a new ramp to have more available spots.

Johnson said that the parking services recommend rates and get approval from city council. The cap they set between $83 and $170, meaning that the prices for parking will not go above this price. Johnson said he does not see any increase the cap taking place anytime soon.

When looking for available parking, Johnson said the other important thing to look at is the other parking companies downtown. There are privately owned companies that have lots and ramps in Lansing, such as Ellis Parking, Wolverine Parking Company, South Grand Parking, and State of Michigan Visitor Parking. If pricing is too high or there is no availability, it is possible to turn to these companies. The South Grand Parking Ramp is a privately owned ramp on the corner of South Grand Avenue and East Allegan Street. The owner Shawn Elliot said that 90 to 95 percent of his customers are permit holders, however there is available daily parking. Permits start at $125 per month and the daily maximum is $18. Some of the Lansing parking ramps, such as the North Grand Parking Ramp, have a daily of maximum of $10.

Johnson said parking services looks at other operators and finds a balance in order to offer some of the cheapest parking to citizens. Some privately owned lots and ramps offer parking at the same price, if not more than what the city of Lansing offers.

The city of Lansing and privately owned companies downtown offer monthly permits and daily parking in ramps, lots, and on street meters.

All parking options offered by the city of Lansing can be viewed on an interactive map on the Parking Services website or on the corresponding websites for Wolverine Parking Company, South Grand Parking, Ellis Parking, and State of Michigan Visitor Parking. Map of private parking companies and locations of their respective ramps and lots in downtown Lansing. Map by Emily Lovasz.