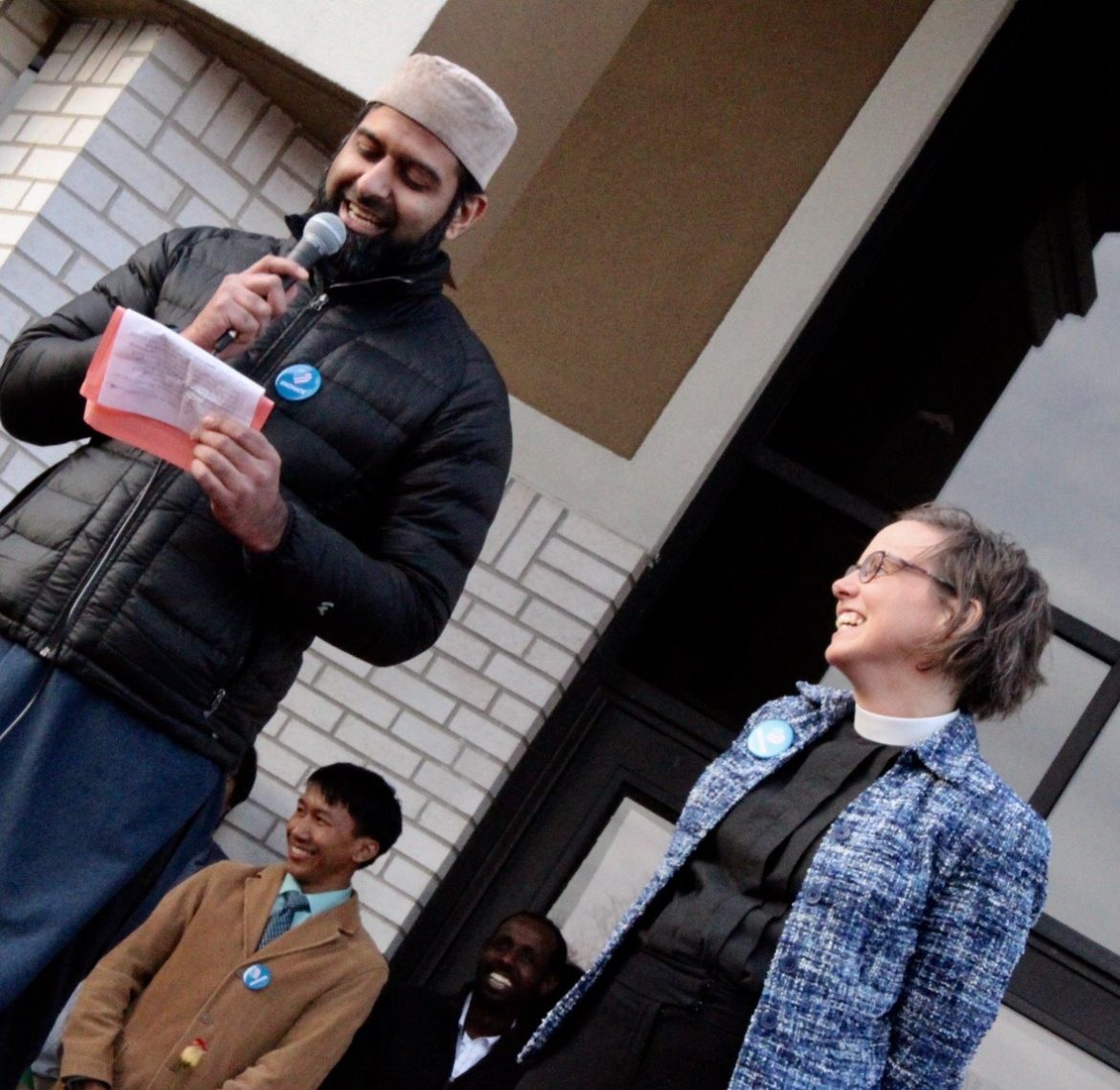 Imam Sohail Chaudhry of the Islamic Center of East Lansing and Parish Associate Alice Townley of the Presbyterian Church of Okemos conclude the prayer vigil.

People gathered in the parking lot of the Islamic Center of East Lansing Feb. 20 to hear leaders from different faith groups speak. This event was created to build relationships among religious communities over prayer, conversation and homemade cookies. People of all ages attended the prayer vigil.

Feb. 20 was Presidents Day and World Day of Social Justice. Prayers, spoken in multiple languages to accommodate the diverse crowd, focused on asking that government and communities find ways to be of service to those in need.

Imam Sohail Chaudhry, of the Islamic Center of East Lansing, addressed the executive order from January that barred entry into the country for immigrants from seven majority Muslim countries. He said it was a violation of the Constitution and that now is the time for unity.

“I think we’re living in a global world right now and we’re interacting with each other all the time at work and we’re neighbors now. If we don’t know each other, if we don’t come together then there will be conflict, there will be problems.” said Chaudhry on the importance of people from different religions learning about one another. “We want to give a better world to our children, to the next generation and that will only happen if people get to know each other, if we break bread together, if we build bridges of peace and understanding, if we know each other’s religions and learn each other’s cultures and traditions, that will, I think, make the world a better place to live in.” Imam Sohail Chaudhry, left, of the Islamic Center of East Lansing with United Methodist Bishop of the Michigan Area David Bard and Rabbi Amy Bigman of Congregation Shaarey Zedek talked about the importance of welcoming refugees.

Pastor Liz Miller from Edgewood United Church of Christ also said it’s an all-hand-on-deck situation when it comes to helping people who might not share the same beliefs. She said that her faith in particular calls her to serve.

“I heard from our refugee community and our Muslim community that it’s really important for allies to show up where they are and to show up at their events, not just create our own rallies and protests.” said Miller. “It means a lot when people show up where you’re at.”

“I think it’s amazing to see that we have such a welcoming community here.” said Harris referencing the hundreds of people who showed up to the event. “No matter what anybody else thinks about this country or about our leaders, we know that this a very supportive community and we’re inspired by them every day.”

Anna is an environmental journalism student at Michigan State University and a writer for MSU's student run publication, VIM Magazine.