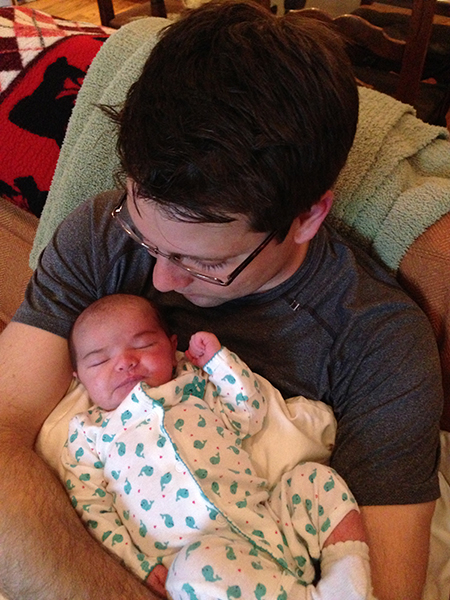 Ryan Pelerin, father of three holds his one-month-old daughter Vivienne. Pelerin took paternity leave for each of his children.

There has been an immense pressure to give working mothers and fathers more options when it comes to parental leave, especially for men who do not have the option to take leave or are only given seven days to be with their newborns.

According to Unicef, there are an average of 353,000 babies born each day around the world. If you break that down, there are 15,000 births each hour and 250 births each minute. With newborns, there is an immense amount of responsibility and planning to account for. Just five months ago, Marcus Sanderlin, father and neighborhood career coordinator at Career Services at Michigan State University, had his first son, Marcus Jr. Sanderlin was able to take a paid four-week paternity leave, as well as four half-time weeks after the birth of his son. Photo courtesy of Marcus Sanderlin

“This is my son, my seed,” said Sanderlin. “I really value family and being around. For me, it was very important to be there for my son as well as my wife.”

Sanderlin was able to take a paid four-week vacation, as well as four half-time weeks after.

“I find myself very fortunate and blessed to have the opportunity to take off time and to really be around for my family,” said Sanderlin. “I do know individuals that don’t have that luxury or option.”

Sanderlin is right. Not all fathers have the option to get paid parental leave or even take a leave at all. In order to successfully greet a new baby into the world, parents need to prepare with every second they have.

That includes researching their legal rights.

The Family and Medical Leave Act of 1993 is a United States federal law that allows  employees to take unpaid leave. The United States Department of Labor states that employees are entitled to 12 workweeks of leave in a 12-month period for the birth and care of a newborn or newly adopted child, or any specified family and medical reason. With the birth of a newborn child, parental leave is necessary in order to care for and nourish the baby in the first few crucial months.

Equality for women and men

In May 2016, President Obama addressed paid paternity leave in his Mother’s Day speech. After thanking his wife Michelle for being an incredible mother and recognizing the value of all mothers, he said:

“Giving flowers is always a good idea. But I hope that on this Mother’s Day, we’ll recommit ourselves to doing more than that. Through deeds that match our words, let’s give mothers the respect they deserve, give all women the equality they deserve, and give all parents the support they need in their most important roles.”

In 1992 when Todd Bradley’s baby was born, paternity leave was not an option. To stay home with his baby, he had to take unpaid vacation time from his job as an organization development specialist at Michigan State University. Todd Bradley attends the Spartans Will Be Great Dads annual fatherhood forum at the Kellogg Center at Michigan State University. Bradley was not given the option of a paternity leave and instead took his own vacation time. Photo by Kelly Cullen.

“As dads become more involved in parenting and caregiving, we have to make some changes to make it more inclusive and user friendly,” said Bradley. “I think there needs to be a push, if you will, or overhaul of the system.”

Bradley said that even though paternity leave wasn’t an option, he knew he had to be there with his wife and baby.

“Well, I felt that it was a responsibility and a good thing,” said Bradley. “It wasn’t really a pressure to take work off. It was motivation to be off and to be a part of that initial bonding and grounding. It’s not just a woman’s job.”

Spartans Will Be Great Dads

Lori Strom, the coordinator at the Michigan State University Family Resource Center, helped put on the second annual fatherhood forum, Spartans Will Be Great Dads. In attendance were fathers, mothers, expectant parents, guardians, MSU students, staff and faculty.  One of the main focuses at the forum was to support fathers and help prepare them to be great parents, Strom said.

“The goal is for people to connect and understand they’re not alone with their feelings of vulnerability,” said Strom. “Fathers are now taking on a bigger role and we want them to know there are resources out there.”

Strom stated that she hopes paternity leave will become more generous in the future and that the U.S. is behind compared to other countries. Strom has not been the first to feel this way. In fact, many fathers have confessed that they feel pressure when taking paternity leave. In a study conducted by Forbes Magazine, they interviewed five dad’s who took leave when their children were born. Many of them talked about the unspoken disapproval of taking too many days off of work.

Bradley, who was working as a corporate director, was not given the option to take paternity leave, he said he could’ve seen himself feeling pressure from coworkers.

Social media is becoming a major influence in opening up the conversation of parental leave.  In an article in Forbes magazine, millennial dads discussed how they prioritize paternity leave. Fathers are starting to openly look for jobs with flexibility in order to take longer paternity leave.

Nev Schulman who stars on the popular show, Catfish made a video with his pregnant fiancee, Laura Perlongo about parental leave on social media. In the video the two of them focused on the importance of having time off after you have a baby for both the woman and man. They compared the amount of time both men and women get off—women typically 106 days and men just seven.

“We take parental leave very personally,” said Perlongo. “America is really bad when it comes to paid leave for moms. I mean these policies are totally sexist. It’s basically saying that taking care of a child is a woman’s job.”

Marisa Diaz is the infant room head teacher at the MSU Child Development Lab. Diaz discussed the benefits of having both parents around.

“They’re able to help each other,” she said. “Obviously a child needs to be fed by mom if parents choose to breastfeed. But even if they don’t, it’s that rest and relaxation, that bonding time. Both mother and father can get that specific bonding time.”

The infant room is a preschool program that accepts children as early as newborns, through five-year-olds, Diaz said.

“Bonding with a child in those first few months is crucial,” said Diaz. “It helps the child feel secure and with that there’s a lot of research behind secure attachment with parents.” Marisa Diaz works in her office at the MSU Child Development Lab. Photo by: Kelly Cullen

Although the United States has a long way to go, fathers like Sanderlin are inspirations for mothers and fathers pushing for an improvement in parental leave policies.

Sanderlin said it was crucial for him to be there to assist in the transition from hospital to home and to what life would shape to be.

“Every moment with my son is a moment that I can’t get back,” said Sanderlin. “Being involved and taking advantage of the first time that he did anything really was so important.”

His wife had a cesarean section, so it was very pivotal that Sanderlin was able to be at home with her.

“She was in a place where physically she was recovering,” he said. “So, for me, being able to be a father and really step up and take care of my son was important. “The first time my son wet his diaper, I changed it. The first time he had to get put back to sleep, I put him back to sleep.”

“I am working to be the best father that I can be,” he said.