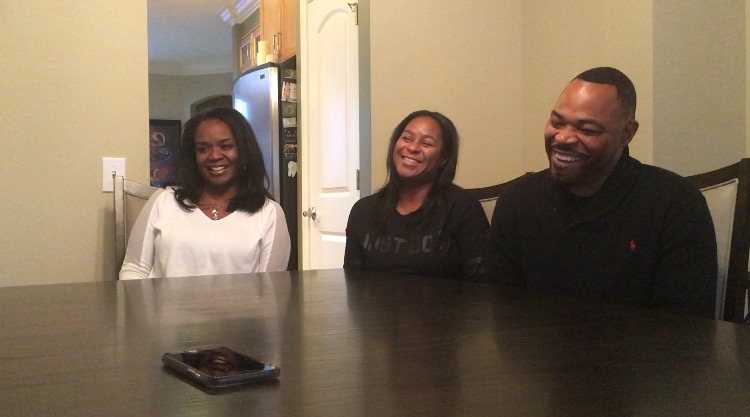 Grand Ledge is a city where the predominant race is white. With only 5.56% of the population being minorities, Grand Ledge senior Desirae Storball said she doesn’t really fit in.

“I’ll go to events, and I’ll feel like I’m apart of the picture of it but then when I think about it, I’m like oh, I’m not really standing and talking with all these people,” Storball, who is African-American and Caucasian, said. “But, you can feel that your presence isn’t really wanted sometimes.”

Storball said she has encountered uncomfortable experiences in class.

“It just made me feel really uncomfortable because the way the people were talking about racism in the past, they were making jokes about it, and then I said something,” Storball said. “They were saying ‘I was just kidding’ and I was like ‘it’s not a joke.’” The student said things were different when she went to a charter school in Lansing.

“My friends were Mexican, black, white; my best friend, she was Vietnamese,” Storball said. “I just met all types of people and those were probably the best years of my life, and then I moved here and it’s just like they (the other students) clicked together.”

In the video below, Storball speaks about why she doesn’t fit in.

Grand Ledge resident James Carter said you know you are a minority in Grand Ledge by the way you are treated.

University of Texas researcher Danielle Kilgo speaks about what it is like for minorities to live in Austin, Texas which is a predominately Caucasian area.

Kilgo, who is of mixed race, studies new media and journalism with a focus on minority communication and how the news portrays minorities and the effects of the portrayal.

Carter said he has personally experienced racial profiling, but things got better as the community got to know him.

“The profiling is gonna be there and it has been a lot less,” Carter said. “I think because I have been here for so long and they know me now.”

However, that is not the experience for his friends who occasionally visit the community.

James Carter’s wife, Sonya Carter, said she thinks it could be challenging for minorities to live in Grand Ledge if they are not active in the community.

“There’s not a lot of participation from the parents’ standpoint,” Sonya Carter said. “If they come into the community not wanting to be apart of the community, I think it would be hard for them.”

James Carter also emphasized the way to challenge stereotypes is to be active in the community.

“It’s changed just from me growing up here,” James Carter said. “It’s got a long way to go but, I think families like us need to keep moving out here and keep our kids going to school here,” he said.

Talking to children about discrimination

Deana Newman, first African-American woman to be elected to the Office of Trustee for the Democratic Party, describes a racially motivated vandalism in her neighborhood.

“From a parent’s perspective, we were kind of robbed of that opportunity to have these candid conversations with our kids about the world as it is,” Newman said.

Newman said she admires the children because once they understood what happened, they were all appalled and questioned why someone would do such an act.

“I haven’t necessarily gone to school in a predominately black area so, to me, it’s just normal,” Ross-Walker said. “But, so far, this school seems very accepting of everybody.”

Grand Ledge resident Andrea Rosas speaks about how her child has been treated and what she has noticed since the presidential election this year.

James Carter said that he has seen a change in Grand Ledge and conversations about race are beginning to happen in this area.

“This open dialogue of race is something that is being planned within our area and I’ve been invited to join in on that conversation,” Newman said. “Know that the awareness is there. The steps that need to take place from here are taking place. The acceptance of diverse groups is there. We’re headed in the right direction.”