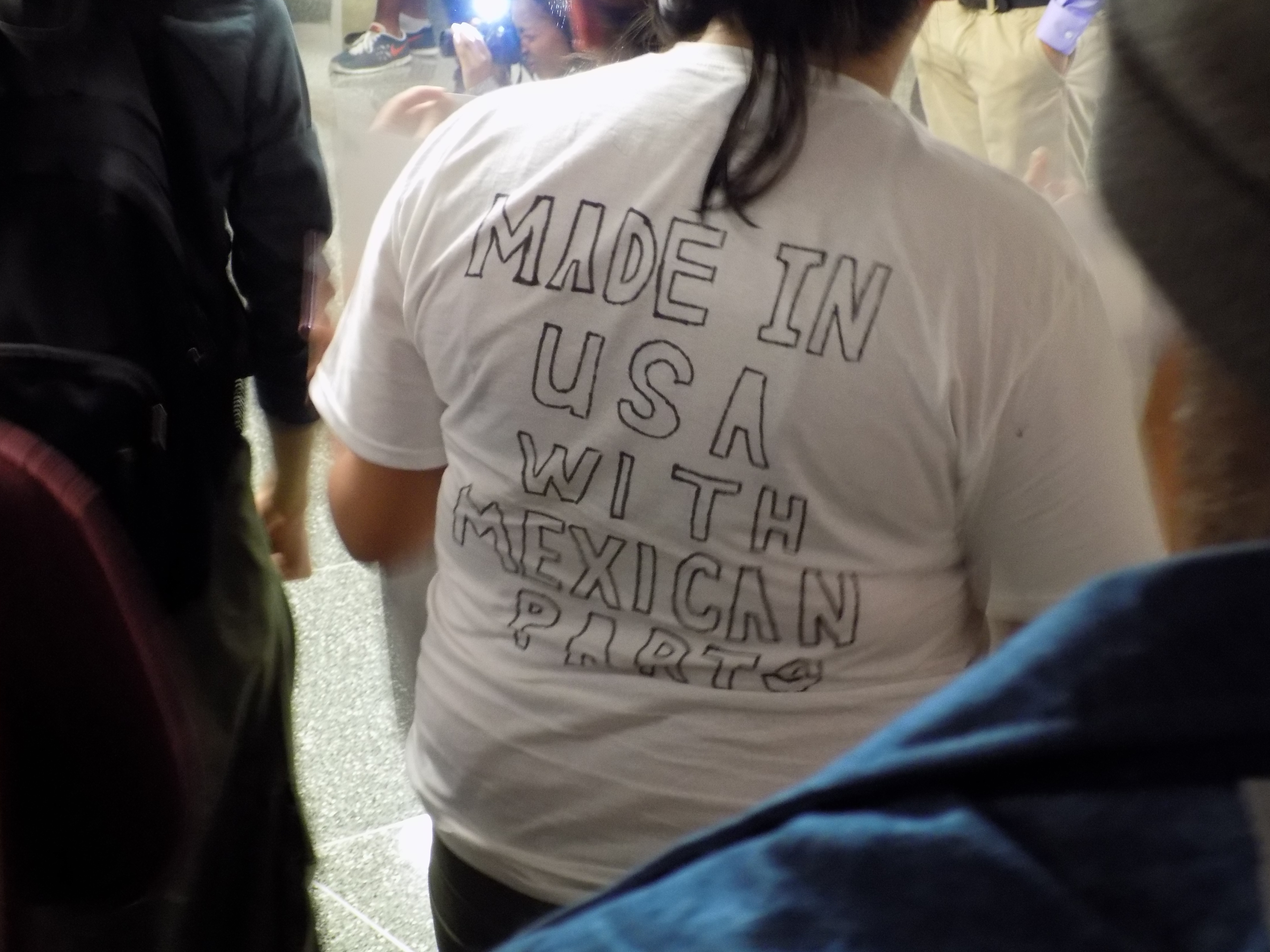 A protester wears a T-shirt that reads "Made in USA with Mexican parts" at the MSU Union on Nov. 2. Protesters rallied against a speech by Republican presidential candidate Donald Trump's son, Donald Trump Jr. 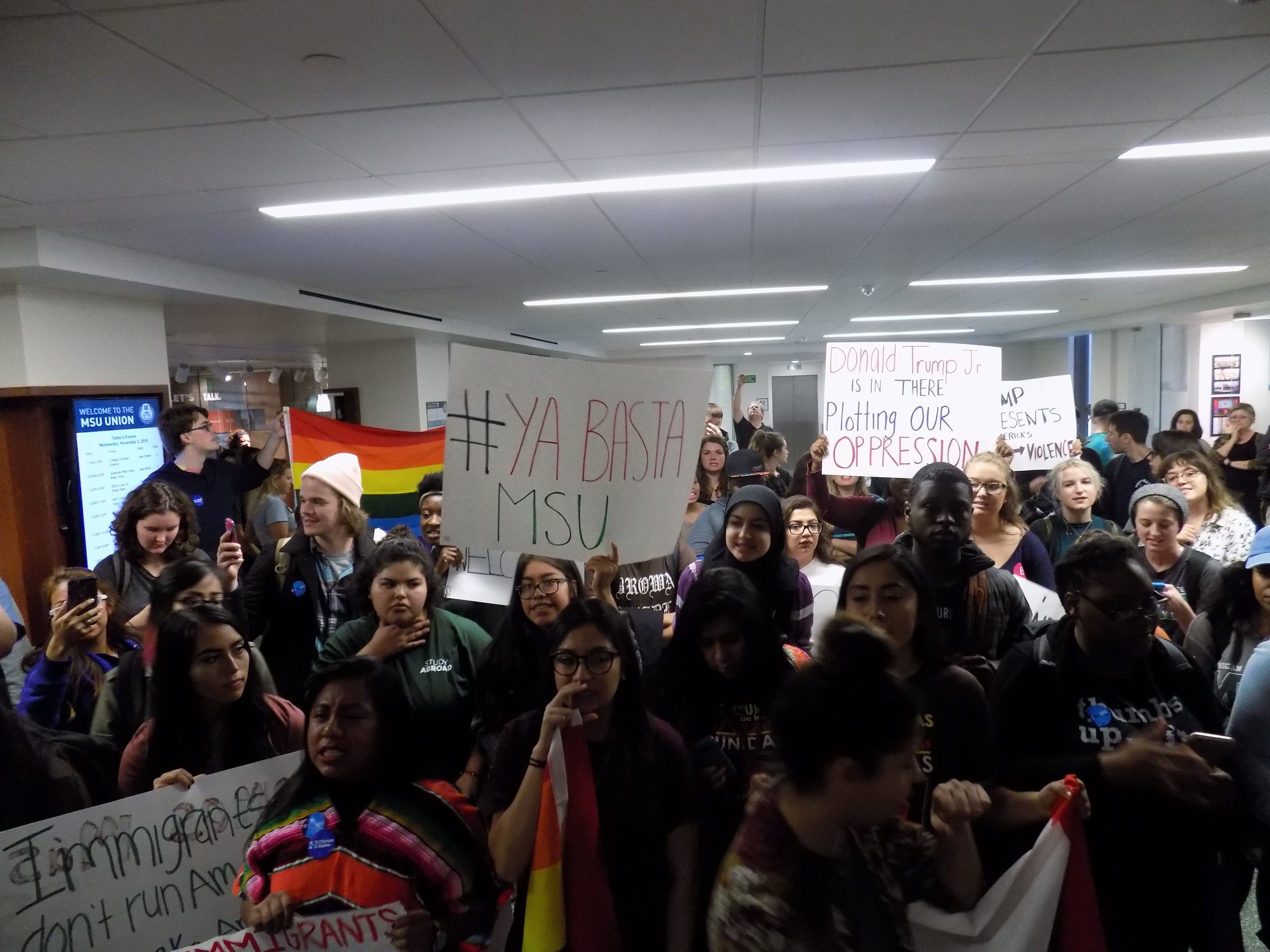 "We will not be silenced," the crowd chanted. 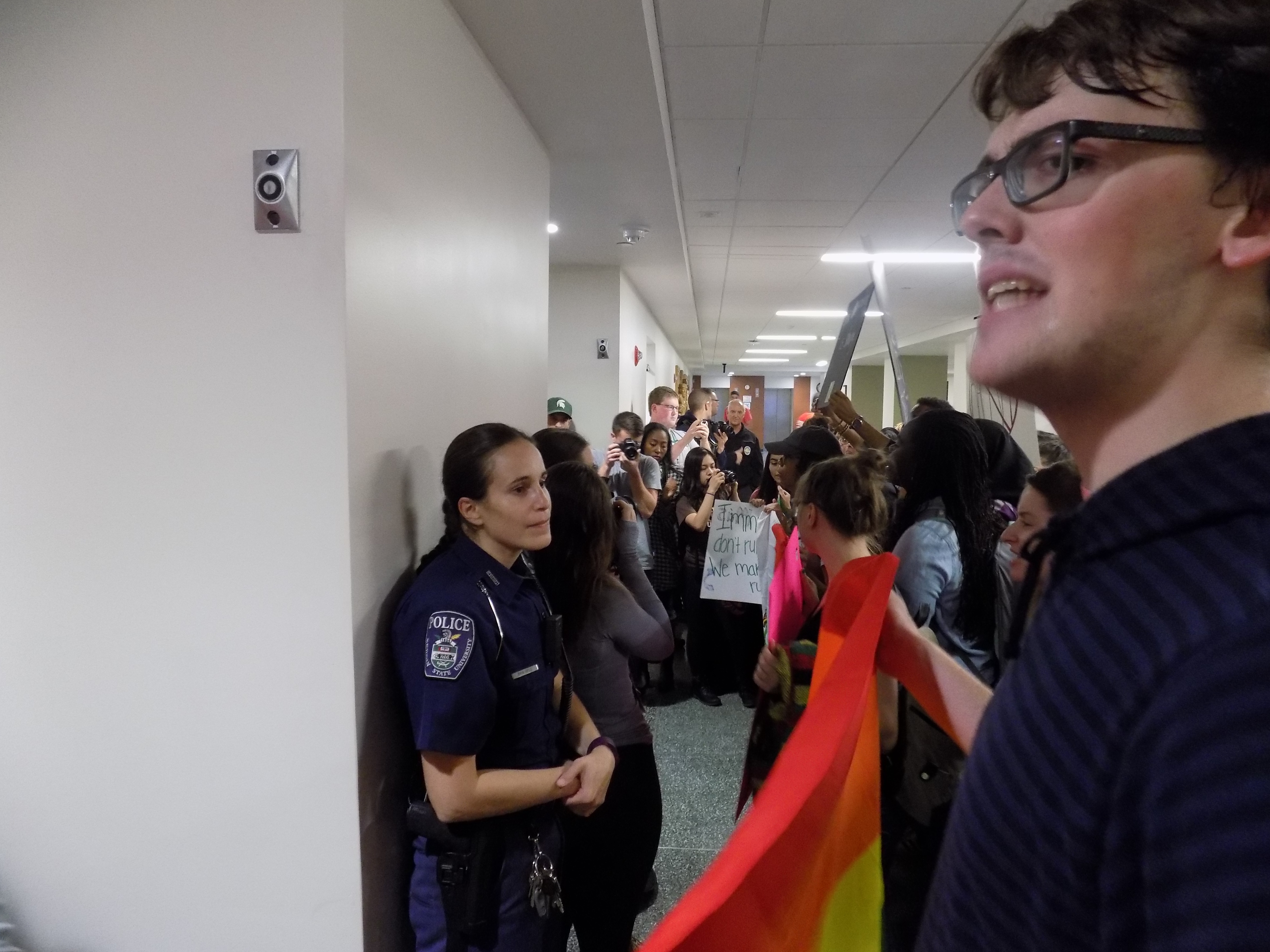 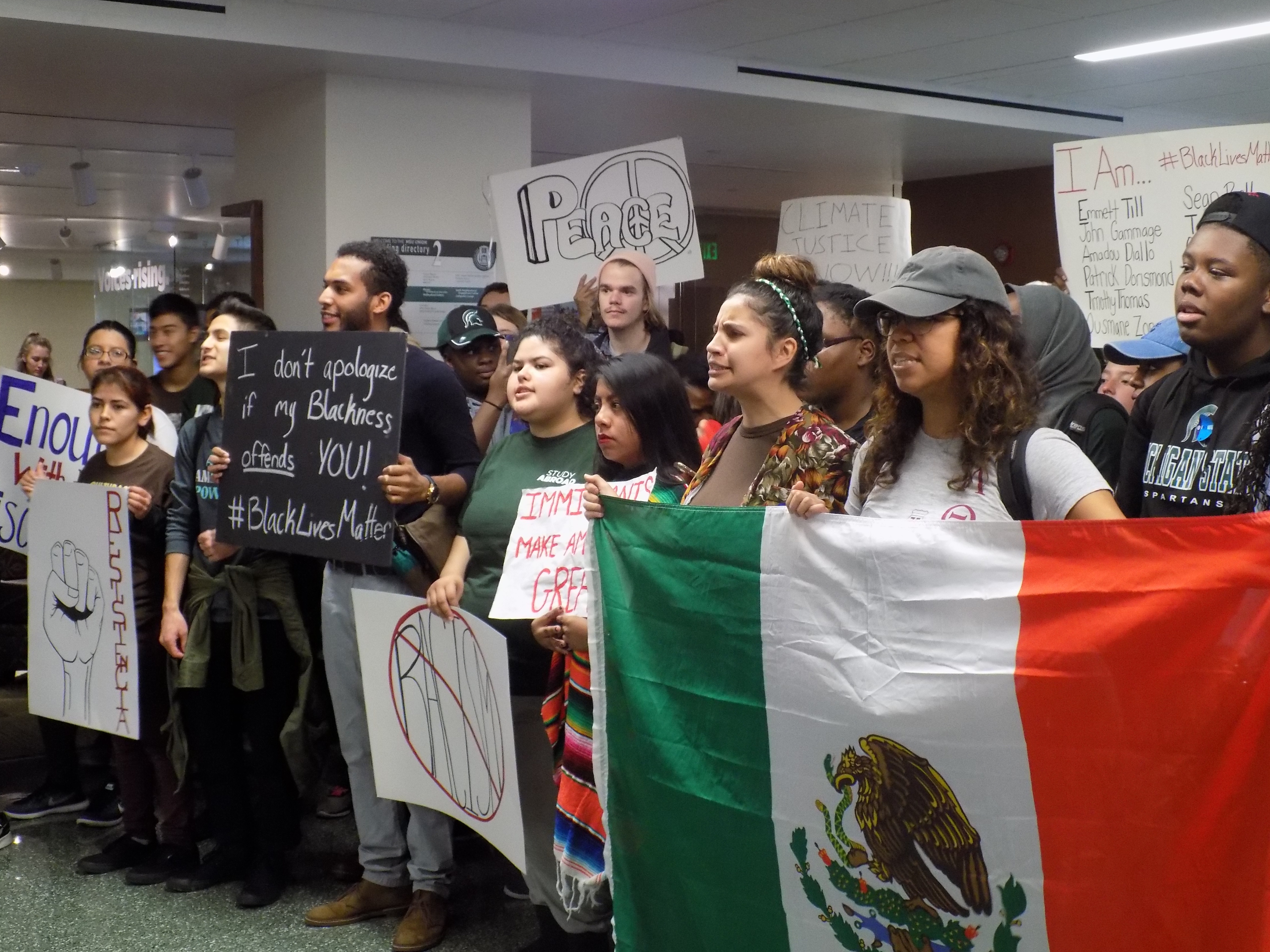 Protesters gathered at the MSU Union on Nov. 2 to protest a speech by Republican presidential candidate Donald Trump's son, Donald Trump Jr. Protesters were denied entry to the event but stood their ground outside the ballroom. 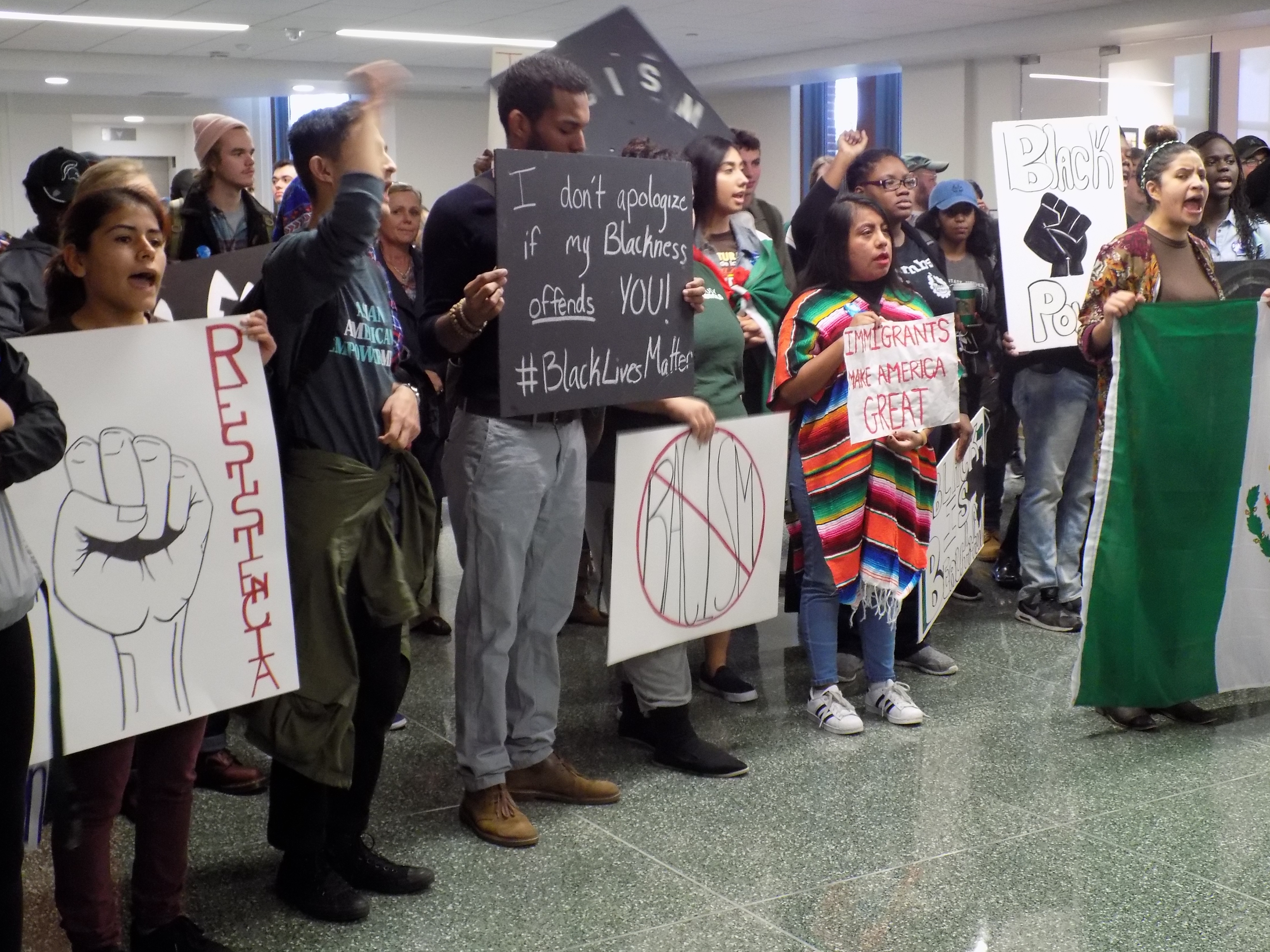 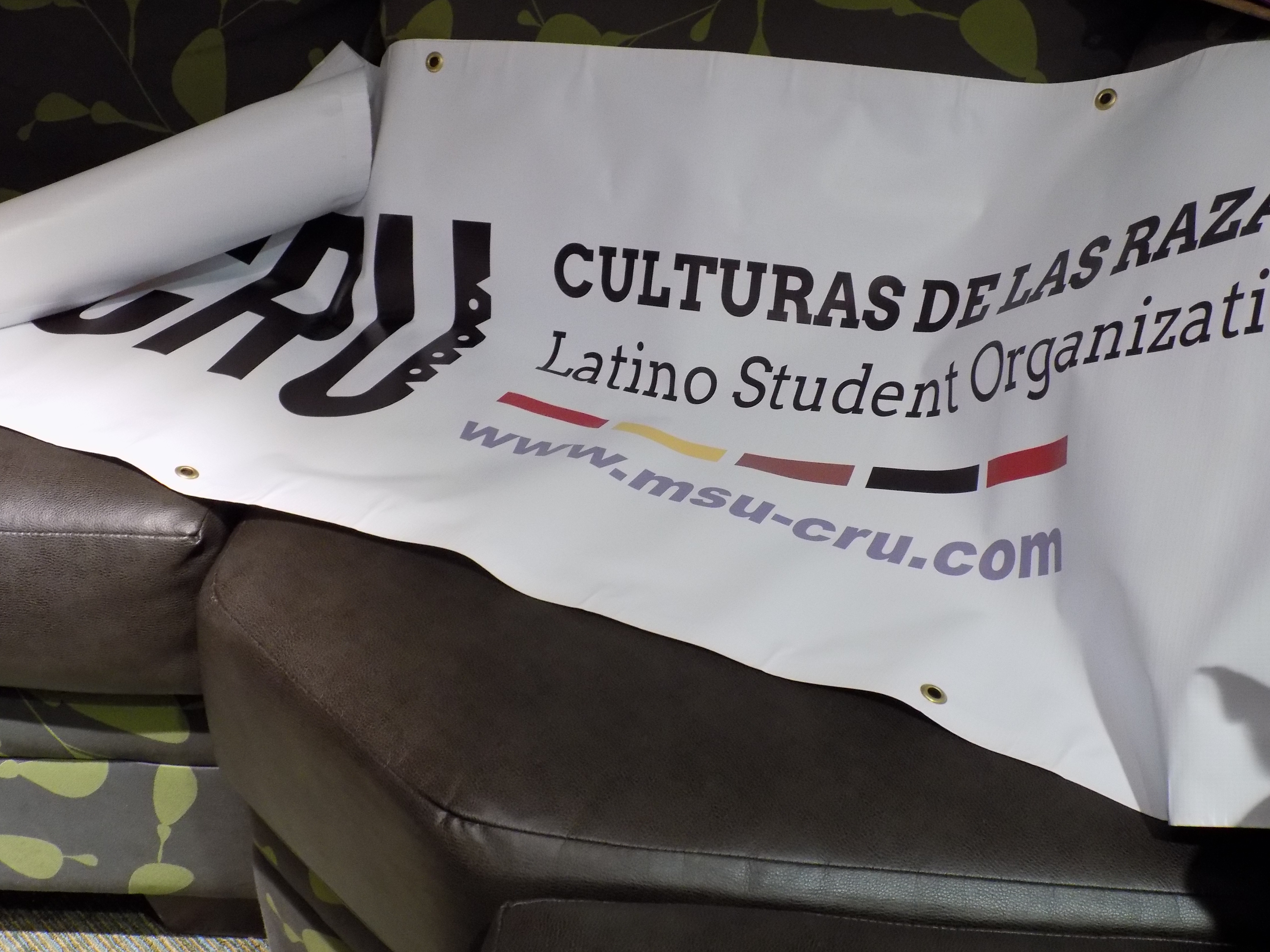 The protesters packed in close in the hallways of Michigan State University’s Union building.

In the second floor ballroom, Donald Trump Jr. was rallying supporters of his father ahead of the Nov. 8 election. Outside the room, protesters held signs with messages of support for various minority groups and chanted phrases like “love, not hate” and “we will not be silenced.”

“I feel like this election’s gonna be a big election. It’s shown a lot of racism occurring in the country,” said Mauricio Cervantes Jr., a member of Culturas de las Razas Unidas, also known as CRU, a Latino student organization that helped organize the protest. “This election’s just gonna help us towards mending our country, hopefully in a good way.

The protest was just one of several efforts by CRU and other groups to speak out against what members saw as a campaign that attacked immigrants and minorities, including Latinos.

And that sentiment has spilled over after the election. There were middle schoolers in Royal Oak, Michigan, chanting “build that wall” at the cafeteria, a referent to President-elect Donald Trump’s campaign pledge to build a wall between the United States and Mexico. According to a report released by the Southern Poverty Law Center, Michigan had the highest number of recorded hate incidents in the Midwest in the first 10 days after the election.

ASMSU made a post announced it was inviting four of the presidential candidates to visit campus. CRU’s treasurer, Maisie Rodriguez, posted a comment expressing her disapproval that Trump was among the invitees.

Her comment was removed and she was blocked from commenting further on any of ASMSU’s posts. It was an issue of censorship, Rodriguez said at a town hall that CRU organized on Oct. 13 — not about Trump.

“It is a reflection of the election,” Rodriguez said.

“It’s kinda similar but just on a smaller scale,” said Estephanie Lopez-Diaz, who also is a member of CRU.

This was an important election, said Ruben Martinez, a sociology professor and the director of the Julían Samora Research Institute at Michigan State University. Part of that was because the campaign had been a divisive one, he said.

“People are really passionate about issues,” Martinez said. “And I think that’s reflected on the local levels, in our cities or in campuses. Students are really engaged, willing to learn about politics, and certainly it reflects that.”

At the Trump protest inside the Union, students were giving out Clinton 2016 stickers for protesters to wear as they chanted. But even with anti-Trump sentiment appearing so strong, not all Latinos voted against him.

Exit poll data from CNN shows 66 percent of Latino voters cast a ballot for Democrat Hillary Clinton, while 28 percent voted for Trump — similar to how many Latinos voted for Republican Mitt Romney four years earlier. Clinton failed energize the Latino vote as Barack Obama had in 2012, when he earned 71 percent of the Latino vote, according to an analysis by the Pew Research Center.

“This time around we’re just cognizant that Donald Trump is the literal epitome of that which oppresses us. Hillary Clinton, while she undermines communities of color and she exploits us, is the safest option.”

Natasha Blakely is a journalism major with a double major in arts and humanities. She has experience writing in different styles, having worked for magazines, newspapers and online publications. Blakely hopes to become an environmental journalist and also write about social issues.