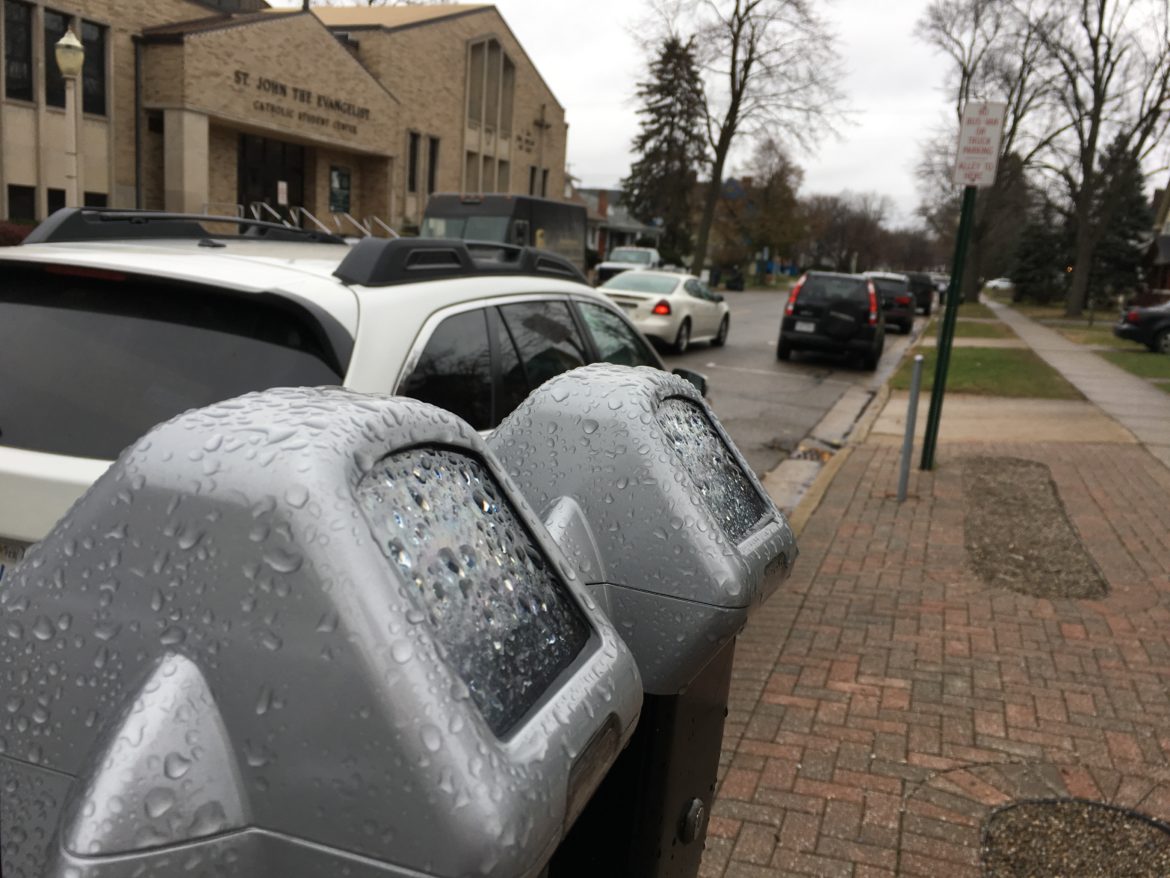 Between the vigilance of PACE (Parking and Code Enforcement) and the fees associated with metered street parking, parking lots and parking garages, frequent patrons of East Lansing have adapted accordingly. After a few tickets, drivers suggest that they eventually settle for pay-as-you-go enclosed parking to bypass the risk of another infraction.

Yet, for the financially constrained, that can mean fewer trips downtown and more home-cooked meals. For others, that can mean planning their city saunters for Sundays–when parking is free.

“Sometimes, my friends and I will only come on Sundays if we’re planning on going out to eat,” said Allison Mass, who had three tickets in 2016 amounting to $70. Off-campus public parking is divided into timed, lotted and metered parking. Sophie Steiner, a local resident and East Lansing High School student, isn’t bothered by parking on the two-hour fringes of the central business district to save a couple of bucks.

“I don’t mind walking,” Steiner said. “Often when I go to the store, I park way in the back just so I don’t have to deal with other cars and people running around.” M.A.C. Avenue has metered zones, pictured above, closer to campus and timed parking past Linden Street.

However, Steiner knows that parking in East Lansing is a constant nuisance for many others. In addition to recent ordinances that extended meter hours late into the night, the city does not permit parking on any street from 2 a.m. to 6 a.m. unless otherwise noted. PACE enforces all codes through tickets and towing 24 hours a day, seven days a week.

“I think as far as availability goes, it’s fine. It’s just the price that gets most people–I’ve noticed–riled up,” Steiner said. “And PACE obviously does their rounds pretty frequently. Pretty much everybody I know has gotten a ticket at some point.”

In 2015, slightly over $1.6 million was collected for parking fines and ticket incomes. A combination of parking ticket payments and other sources of revenue totaled over $6.1 million. A ticket sits on the windshield of a car parked at an expired meter.

While the plight of parking seems to encumber residents in order to benefit the city, that has not been the case, according to East Lansing Parking Administrator Caleb Sharrow. The Automobile Parking System Fund recorded a $255,954 profit in 2015–excluding the revenue or costs of ticket remittances–and it will be direly needed in the future.

Looking forward, black margins may be out of the picture for the parking fund due to maintenance and technological improvement. Sharrow said that those expenditures have been increasing yearly, and the parking fund needed to try to keep up.

“The parking system has historically been a break-even operation that is in place to provide a service to visitors and residents of the downtown,” Sharrow said. “It needs to be in place to fund facility maintenance and to pay debt-service on loans for garage construction, technology upgrades and capital improvements.” Because of an avalanche of maintenance and improvements, the costs have significantly exceeded previously allotted numbers. They are now the highest in years.

“The Parking Fund has been struggling to get into a position of positive working capital (current assets minus current liabilities) largely due to the amount of debt associated with the system,” read the 2017 fiscal year budget report.

The report stressed that renovations are necessary for the MAC Garage rehabilitation project in 2017. The installation of Parking Access Revenue Control systems in parking lots and ramps would also add to costs. On top of waterproofing projects, the value of capital upgrades would require debt financing of approximately $6.4 million.

The city reported such projects as “critical needs” in the 2017 budget report.

In order to indemnify the losses, the city will have a highly inflated parking budget, mostly paid for with “other financing sources” that include short-term loans and bonds. The 2017 parking fund budget of $10,980,850 is nearly two and a half times the 2016 figure. Complicating the quandary, returns from 2016 foreshadowed a significant decrease in city revenue in the field of tickets. The 2017 year was forecasted at $1.3 million, a 19 percent decrease from 2016’s projection.

As the parking system nosedived into debt incurred from loan payments and infrastructure development, a shortfall of parking transactions in 2016 exacerbated the dilemma. Buffering–although possibly contributing to–the deficit was an attended lot price uptick in July of 2016. Graves stands in her parking attendant booth. There were 47 budgeted parking fund employees in 2016, and there are 51 employees requested for 2017.

Parking attendant Erica Graves said she noticed the drop-off of users nearly immediately, but only in one demographic–students.

“It’s a mixture. It’s more older people though,” Graves said. “I noticed that [students] haven’t been parking here a lot because they went up on the prices.”

For those planning on parking in East Lansing, the parking fund deficit could make for costlier parking in the future. In the financial year of 2017, the parking authorities plan to increase month-by-month permit costs by $5. Sharrow said that he did not expect the 2016 everyday hourly rate increases to jump in 2017, however. The Division Street parking garage is a downtown landmark.

Under the 2017 budget proposal, special event parking rates will also increase from $1.70 to $3.00 after the first two hours, and the new daily maximum charge will be $20 instead of $15.

All of this comes as grim news to students and residents alike.

“(The city should) allow students to purchase a parking pass that was not extremely expensive,” Mass said. “That’s what a lot of normal universities to. I have a lot of friends who go to [Grand Valley State University] who don’t have to pay for parking.”

Yet while soaring costs seem ghastly to itinerant students and newer residents, Richard Liscombe remembers when there wasn’t the Division Street garage–the garishly pied block that looms over downtown. After opening Footgear in 1982, Liscombe saw a spike in visitors following the ramp’s construction.

“The more parking you have, the better it is,” Liscombe said. Footgear is perched on Division Street in East Lansing. It has been family-owned at that location since 1982.

For Liscombe, added business that pulls into East Lansing because of parking availability easily offsets the rates. As he put it, the costs of parking are negligible when considering a day out on the town.

“They just say, ‘Oh, there’s no place to park.’ Well, that’s kind of ridiculous,” Liscombe said. “There are places to park; it’s that they want to park right in front of the store they’re going to… and then they’ll say, ‘Well, I’ll just go to the mall because there’s parking.’

Sharrow said that was the design from the beginning. The parking structure, he said, has always been a break-even principal, and improvements in the infrastructure have been subsidized by short-term loans and bonds. Yet, its primary service is to assist businesses in creating the most bustle possible in the downtown corridor.

The parking payments made by residents do not trickle into city profit lines and cover other projects. The chain of finances is largely internalized in the parking fund, and the parking charges cover the costs of employees and upkeep for the garages.

East Lansing is currently establishing a parking reserve fund that would help foot the bill in years of unexpectedly declining revenue. With a backup, the city could keep costs steady and provide the same service without surges in price.

Furthermore, even with the current tide of price increases, the city does not drown its residents in parking fees. Sharrow said that a recent comparative study found East Lansing near “the middle of the pack” in its fees for cities with a similar composition.

And as a college town, East Lansing has to be extra stingy to prevent students from siphoning parking spots from downtown-goers. Additional ordinances are marked by signage.

“The reason they have paid parking downtown is that the students will park their car down here and just leave it,” Liscombe said. “They had that problem in the past.”

While the burgeoning fees associated with a drive downtown might be unappealing on face value, they are in many ways preferable to the alternative. Without the abundance of parking that the structures provide, shopping and eating sprees could be impossible because of inaccessibility.

“Yes, fees deter some visitors from coming downtown,” Sharrow said. “An important thing to remember is that parking itself is not a destination, but the downtown businesses are. The parking system is in place to accommodate customers coming downtown to visit local businesses, and we charge fees to maintain and operate the facilities.”