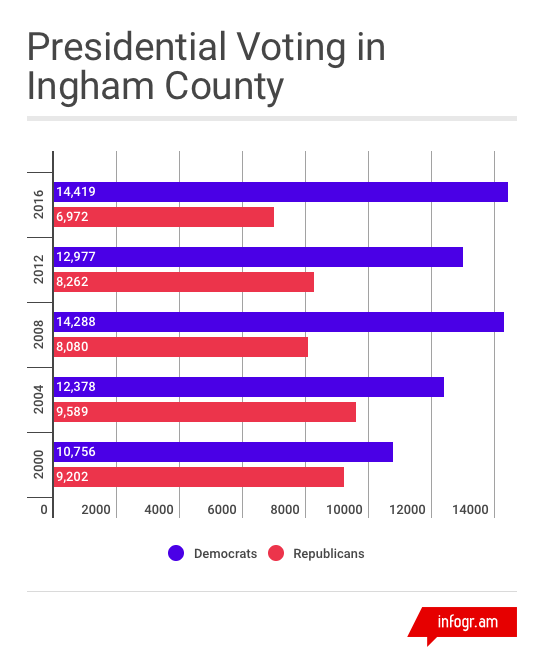 The data of the Presidential Voting in Ingham County since 2000, based on political party.

The 2016 Meridian Township election saw yet another train of dominance from the Democratic Party, as all eight local level openings were filled with the party’s candidates. Democrats continue to hold each of the seven Township Board positions in a one-sided township government.

Meridian had been a predominantly Republican area through the 1980s, but Township Clerk Brett Dreyfus said the change started to occur in the 1990s.

“People can try to guess why that is and what the factors are, one argument is how the community started to get younger and more diversity started occurring,” said Dreyfus, who was reelected as Clerk for his second term. “People started being unhappy with the Republican-dominated mindset and started thinking we need to change something. In 2000, Democrats took the board for the first time, and even though Republicans were still on the board, we began to see the dynamic change.”

In 2016, Julie Brixie will move forward with her third term as Treasurer with a convincing win over non-partisan candidate Erik Lindquist, while Ronald Styka won the Township Supervisor race in similar fashion over Republican candidate Tom Klunzinger. Brett Dreyfus was reelected in an unopposed race for Township Clerk. 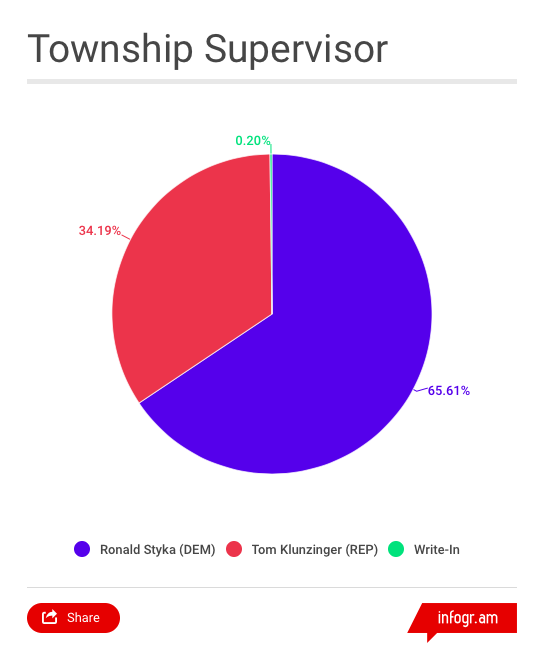 The results of the Meridian Township Supervisor race in the 2016 election. (Graphic Credit: Michael Epps) 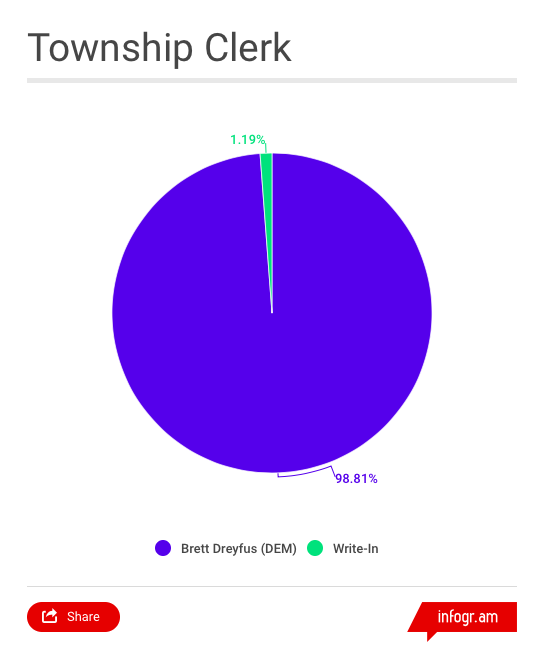 The results of the Meridian Township Clerk race in the 2016 election. (Graphic Credit: Michael Epps) 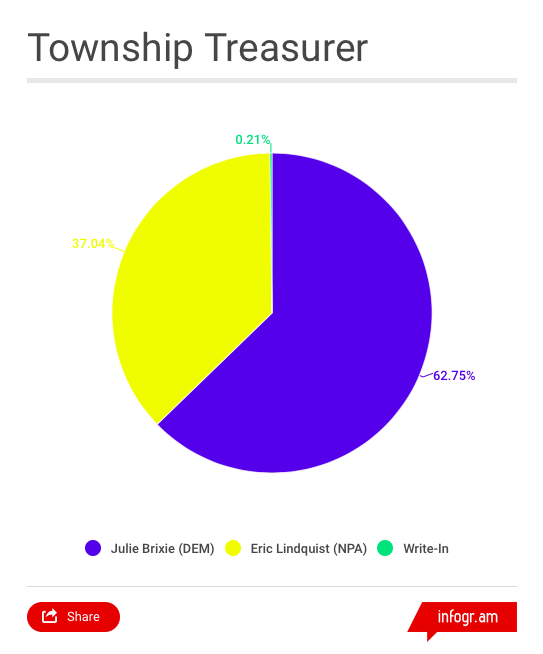 The results of the Meridian Township Treasurer race in the 2016 election. (Graphic Credit: Michael Epps)

A change in political identity

The people of Meridian have witnessed a transformation of the political landscape over the past couple decades. The local government has completely flipped to the Democratic party and the population of the community has taken over the majority as well.

“By 2008 we saw that the Meridian population shifted from Republican to small majority Democrat and today people estimate that it’s about 55-45 democrat, maybe up to 60-40,” said Dreyfus. “So what we have now is a majority Democratic community and that follows the trend of some other communities around Meridian.”

There are any number of factors that have contributed to this change, and not just one can be pinned down as the reason for the Democratic dominance. A widespread opinion among people in Meridian, from residents to government officials, has been the influence of the university being right next door.

“It’s the younger people in Ingham county that have started to dominate democratically,” said Brixie. “We built several apartment complexes that are primarily filled with MSU students, and we already had a lot of housing options for students but now we have more, so that age and education demographic is more democratic and has contributed to the population shift.”

A strong push in recent years for residential development has brought a change in Township population over time. More students at Michigan State are finding apartments to live in that are still within walking distance of campus, since East Lansing is the neighboring community to Meridian.

Neil Bowlby, 62, a Meridian resident who works in the Biochemistry department at MSU, has noticed the Demographic changes in the community and seen how that has impacted the elections.

“There’s two trends going on, one is that the population that was here 10 to 15 years ago is aging and there’s a larger number of older people getting on to retirement age,” said Bowlby, who regularly attends the board meetings for the township. “Number two is that there has been a huge influx of students, young people in developments over in the Hannah Lodges and other spots like that. There’s been a huge increase in the number of students living in Meridian Township in all these apartment complexes.”

This one-sided dominance in the local government of Meridian does not come as quite of a surprise as some may think, according to Brixie.

“A lot of people in our community are employed at the university or attend it, and typically if you look at education the more educated you are the more likely you are to be a Democrat,” said Brixie. “Okemos is the most highly educated location in the state and that contributes to the population leaning Democrat.“

Ingham County has supported this Democrat-leaning trend as well, looking at the presidential voting in the county. Since 2000, the number of Democratic votes and the margin of victory for the Democratic candidate has continued to increase, with the most extreme numbers coming in this 2016 election. The data of the Presidential Voting in Ingham County since 2000, based on political party.

Residents react to the results

The people of Meridian Township knew of the Democratic dominance heading into this year’s election, but many were still a bit surprised about some of the local results.

“The election was in contrast to a lot of what our thinking was, from the polling and the door knocking and the flyers,” said Jeff Neilson, a Meridian Township resident and owner of Tuffy Service Center on Grand River. “And the Meridian Township social events too, and talking to people about the candidates. It’s just alarming to me that the trend is like this and it’s not what we thought before the election.”

Neilson mentioned Township Treasurer candidate Erik Lindquist, a non-partisan candidate who worked hard to try and take down a Democratic incumbent for the position.

“That kid was out 6 to 8 months before the election knocking on doors, and he wasn’t even close,” said Neilson, who has lived in Meridian for 27 years. “I felt terrible for him. I did not think he would have lost by thousands of votes, not with everything that we saw and heard.”

Bowlby was not caught off guard with the results of this election, but more on what the ballot gave voters this year.

“What did really surprise me is the lack of Republican candidates at some of the key positions,” said Bowlby. “There was no Republican candidate for the clerk or treasurer positions. I don’t know why this is, maybe that they think since the Democrats have such a strong hold on the community that they don’t have a shot.”

Brixie, on the other hand, fully expected this result and is happy to see the government continue on this trend.

“I expected it and I was happy to see that we didn’t lose ground at all, in fact we gained ground in this election,” said Brixie. “When I look at the results I see that we have gotten even more Democratic than it has been, so the trend that Meridian Township has been on is continuing that we have even more Democrats than before. But compared to the city of Lansing we have more Republicans.”

Some residents also believe that a government so lopsided to one party can cause serious problems that are damaging to the community for years to come.

“I do find it surprising and I think it’s alarming,” said Neilson, who said he votes both ways given the issue or the person’s character. “I don’t know if there’s necessarily a conspiracy behind that or not, but a fair balance is always a better formula to represent the people. We’re not a 100% dominated Democratic voter society here, so to not only to have the Democrats win all the positions but win in such astounding numbers is alarming.”

Neilson uses the example of him running his businesses as another perspective on how local governmental policy works with a fair representation of the community.

“I’m a businessman so I don’t always surround myself with people that I want to agree with me,” said Neilson. “I need to see both sides and understand the other side and know how to represent them and see the pros and cons. Now what we’re up against here is a group that is going to be able to do whatever they want to do and that they think is in the best interest of the people of Meridian Township even though it’s only one party.”

What residents need to think about

Although many residents may be upset about the way Meridian’s government is structured now, nothing can change without a movement from the community.

Leonard Provencher, a Meridian resident and active participant in local government, believes the people in the community need to get more involved.

“I have a cynical view of people’s involvement in that a lot of what brings people out are just single issues, they come out and address that one issue and then they disappear,” said Provencher, who attends the board meetings and planning commission meetings regularly. “They should come out on a regular basis and look at things at a greater scale. A lot of people have been coming out with this CATA Bus Rapid Transit but we hope that they can continue to come out and stay involved in the local government.”

Bowlby attends the board meetings as well and never hesitates to give his comments and suggestions to make the township better.

“It’s very important to get involved not only for me but for Meridian Township residents in general,” said Bowlby. “There seems to be a lack of interest and lack of participation in local government, people kind of just sit around and let things happen and I think people should be more aware of the things that the township board is doing.

Bowlby has also noticed how the BRT proposal has finally brought a lot of residents to speak out and use their voice to make a difference in the township’s governmental operations.

“CATA BRT is something that has been in the works for 5 years or so and only in the last year when it became more publicized in Meridian is when people finally woke up,” said Bowlby. “They made a group called ‘Stop BRT’ but this isn’t an all of a sudden thing, it’s been around for years and was only just recently that people became aware of it and became active in it, and once they started to get involved they forced CATA to drop the proposal.”

Dreyfus also stressed the importance of voting, even if you don’t like either of the candidates.  You can listen to his interview on voting and participation below.