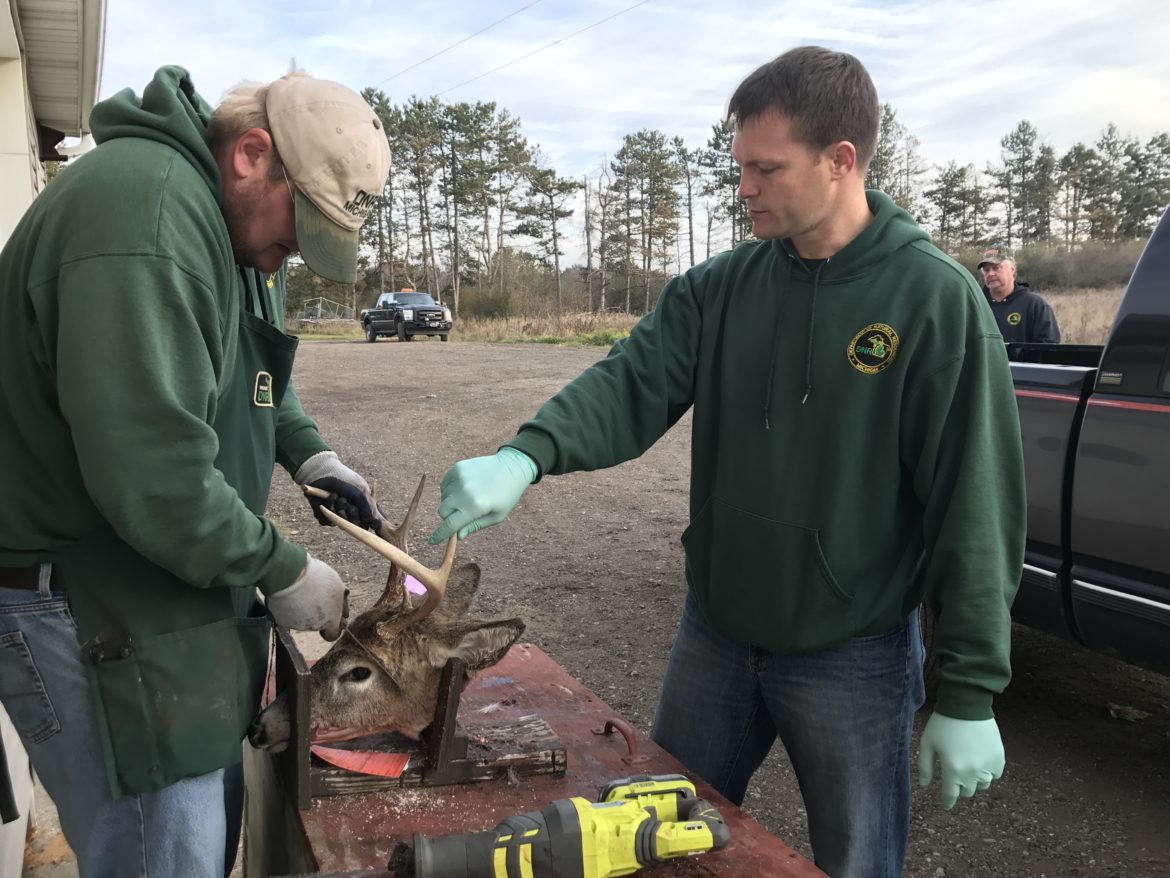 Over 1,000 deer from Meridian Township have been tested for chronic wasting disease in order to gauge the extent of the problem, with eight deer confirmed positive for the disease in Clinton and Ingham counties.

In May of last year, the first free-ranging white-tailed deer in Meridian Township was found to have chronic wasting disease, a fatal neurological disease that affects white-tailed deer, mule deer, elk and moose.

According to Dr. Jen C. Owen, Associate Professor of the Department of Fisheries and Wildlife at MSU, chronic wasting is a prion disease that only affects other cervids – mule deer, white tailed deer, elk, moose, and reindeer.

Owen explained that prions are misfolded proteins that replicate in the animal by conversion of normal cellular proteins into abnormal proteins, which accumulate in brain tissue and the lymphatic system and resist normal immune responses of the infected animals. Symptoms may not show up for months or years after the animal is infected, and it is always fatal.

Meridian Township implemented a deer management plan that allows a select group of hunters to hunt on private property from Oct.  1 to Jan. 1 in a deer harvest since 2011. However, now hunters have to submit the deer head for testing at check stations, instead of donating the meat to food banks.

The harvest was implemented because of deer overpopulation and has been running ever since, allowing qualified and experienced hunters to bow-hunt deer in select areas of Meridian Township. 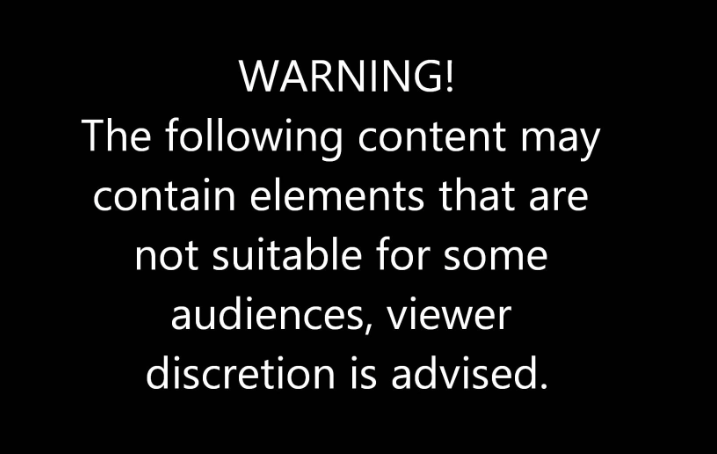 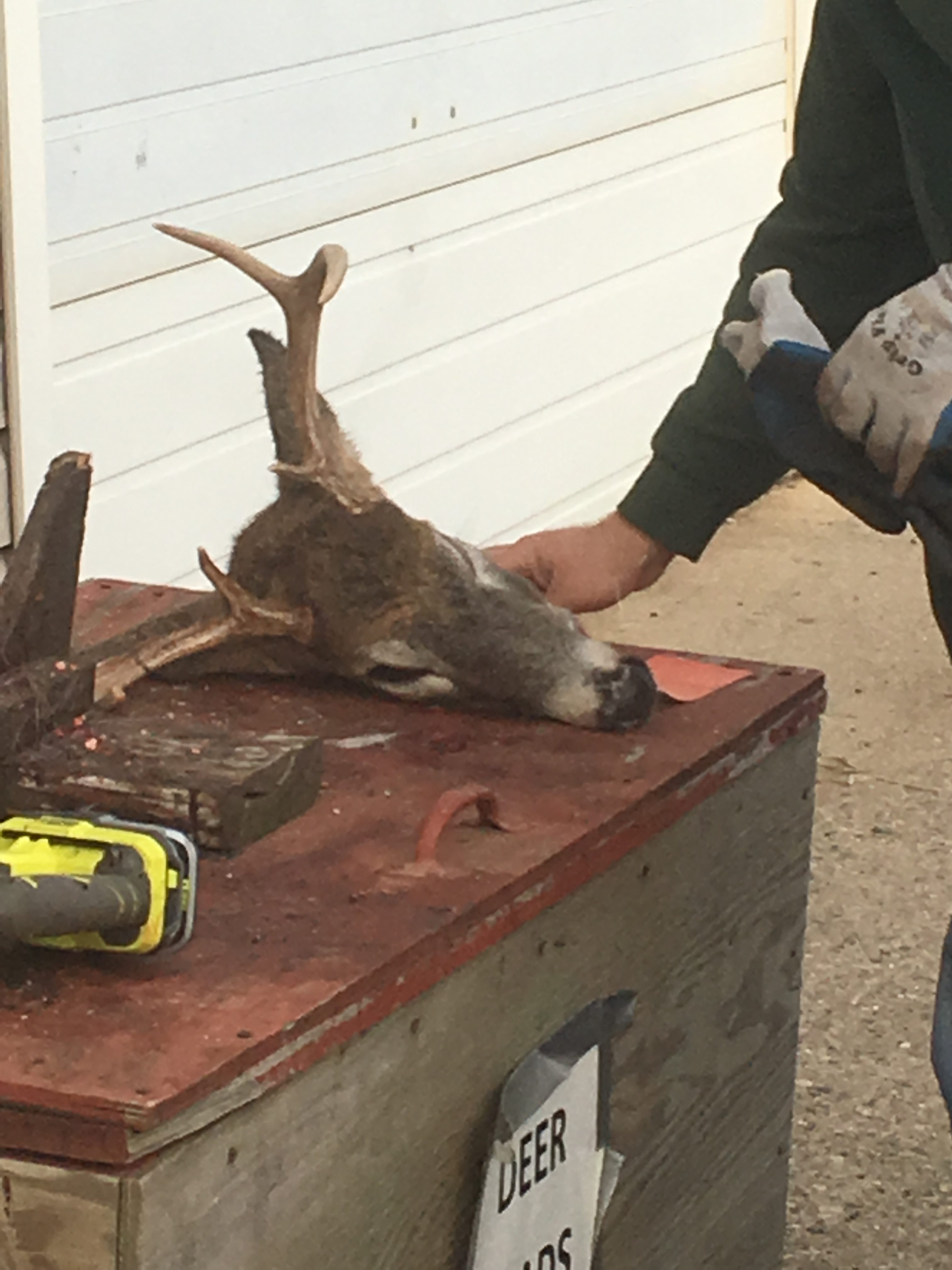 A deer head ready to be prepped for antler removal on the work table. 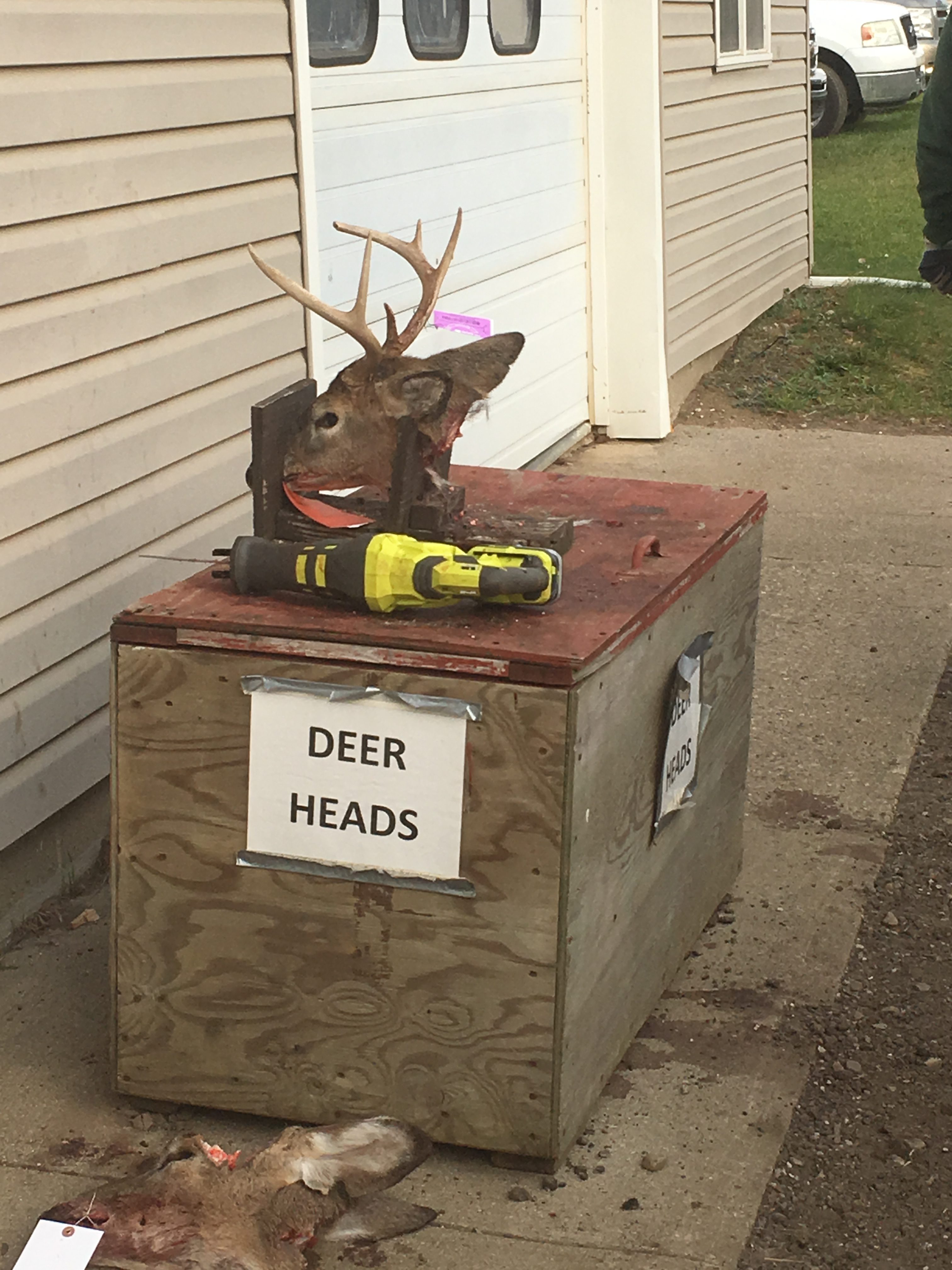 A deer's head prepared to have antlers removed (top) and a deer head after antlers are removed (bottom). 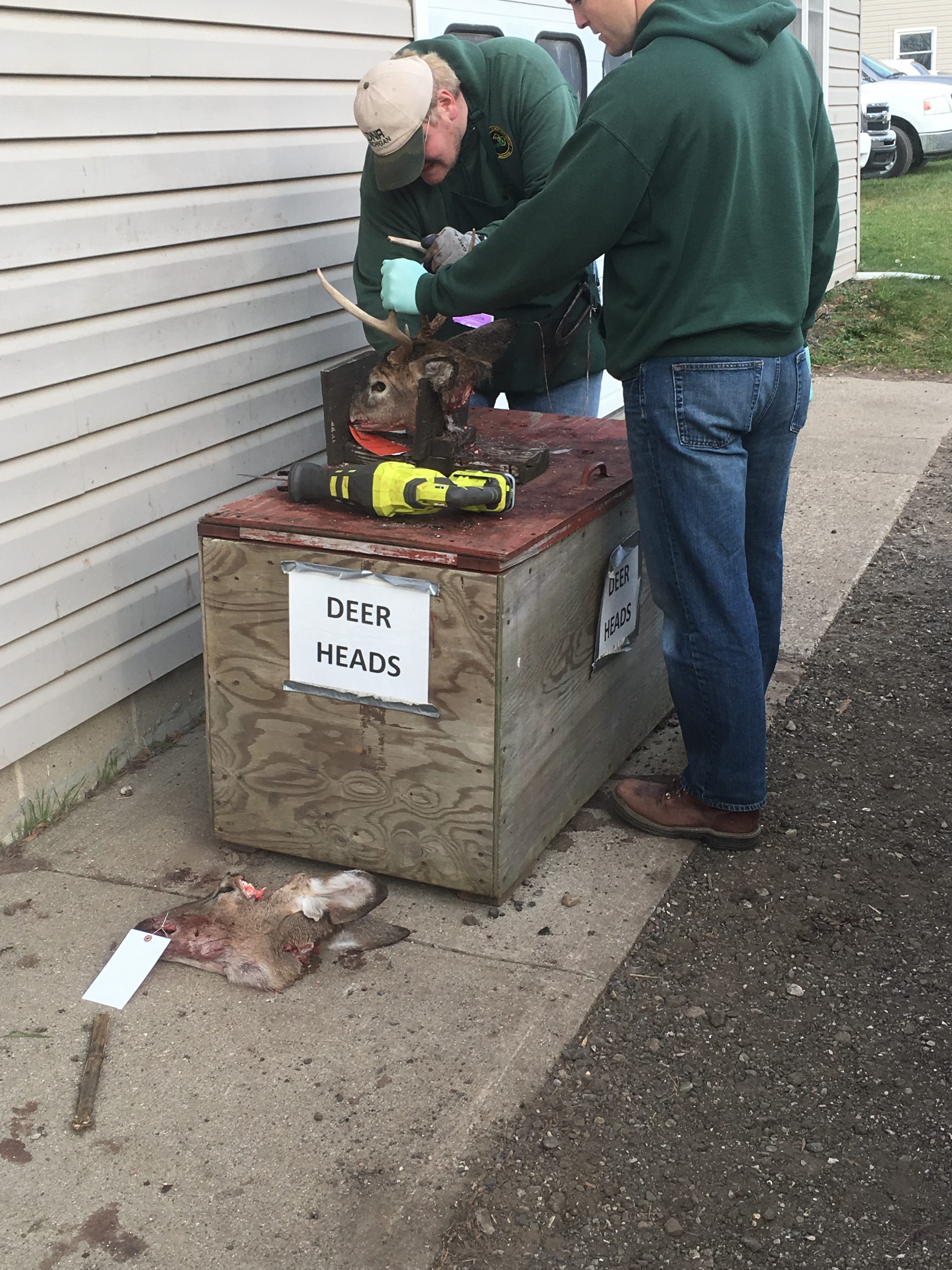 The workers preparing the head. 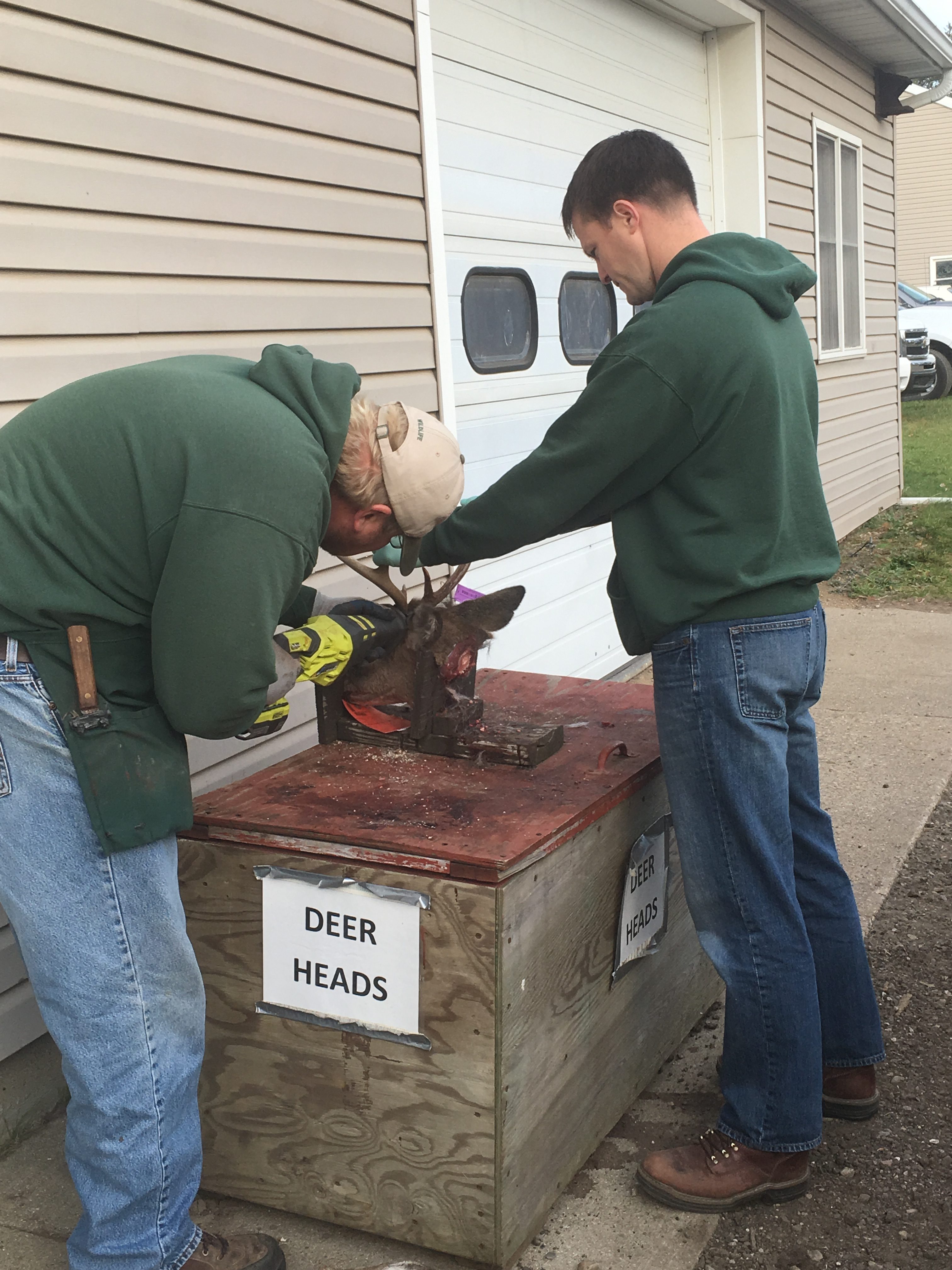 Checkpoint workers drilling the deer's head to remove the antlers. 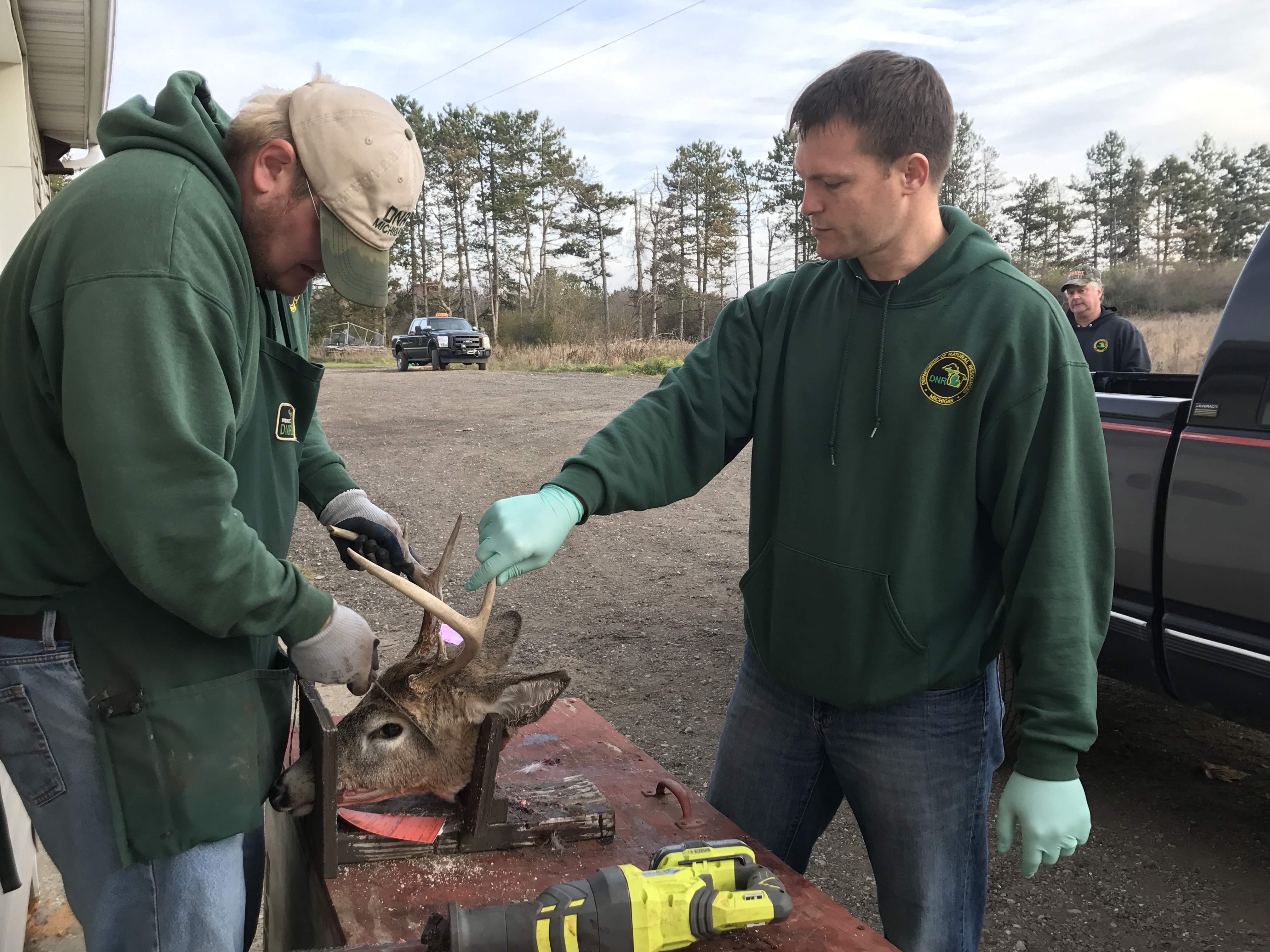 The checkpoint worker cutting off antlers to give to the hunter who brought in the deer to the check station.

Jane Greenway, Senior Parks and Land Management Coordinator for Meridian Township, said the program is highly managed to guarantee the safety of the residents.

“Because Meridian is a densely developed suburb, we need to be particularly conscientious of who is hunting, where they are hunting, and how they are hunting.  To this end, we only allow township residents to be involved,” Greenway said.

Greenway explained that all applicants are required to attend an archery workshop where the integrity of the program is emphasized and are also required to participate in a proficiency test.

“The hunters are in designated locations, in elevated tree stands, and are required to check in and out on each day they hunt,” Greenway said. “This allows us to know who is in our parks at all times in the event that something happens. So far we have not had any major issues and have received many accolades for our program”

The harvest takes place on nearly 2,000 acres of parks and land preserves in Meridian Township, and hunters are allowed to harvest male and female deer. Due to focus on the issue of over-population, female deer are the primary focus of the population control program.

Derek Proulx is one of the Meridian Township residents that hunts in the deer harvest . He says he chose to hunt for many reasons, especially in helping to protect the deer herd from chronic wasting disease.

“In years past I always hunted state owned land and the hunting was very tough and crowded. After reading about the success of the Meridian hunt I knew this program was something that I wanted to be a part of and help with,” Proulx said.

Proulx said that he had been assigned to hunt at Harris Nature Center, but has found it challenging due to the amount of foot traffic at the site.

“City limits and urban hunting is a whole different ballgame compared to hunting ‘ up north’ in a more agricultural type setting, however, I was up for the challenge,” Proulx said.

Gabe Griffith also hunts for the deer harvest, and said the program is very convenient because of its proximity.

“I think there’s a lot of property that isn’t used or hunted very little by personal property owners in the area. With this hunt we are able to address the population issue as well as do testing for chronic wasting disease to hopefully find a solution and stop the spreading,” Griffith said.

Griffith said that he was raised to always eat what he kills, so he still eats the deer he harvests even though he has it tested first.

“I’ve always done the same thing with a deer after harvesting: clean it, butcher it, and eat it,” Griffith said.  “My mom’s rules were always: if you shoot it or catch it, then you have to eat it. I’d like to think that’s the correct way to hunt or fish.”

At the check station

Once a hunter shoots a deer, they then take it to one of the check stations set up around Meridian Township. There, a Department of Natural Resources (DNR) wildlife biologist will remove the head and prepare it to be sent to the testing lab at the Michigan Department of Natural Resources Wildlife Disease Laboratory located at Michigan State University. The biologist also records information about the size, age, and sex of the deer to be sent onward to the lab. 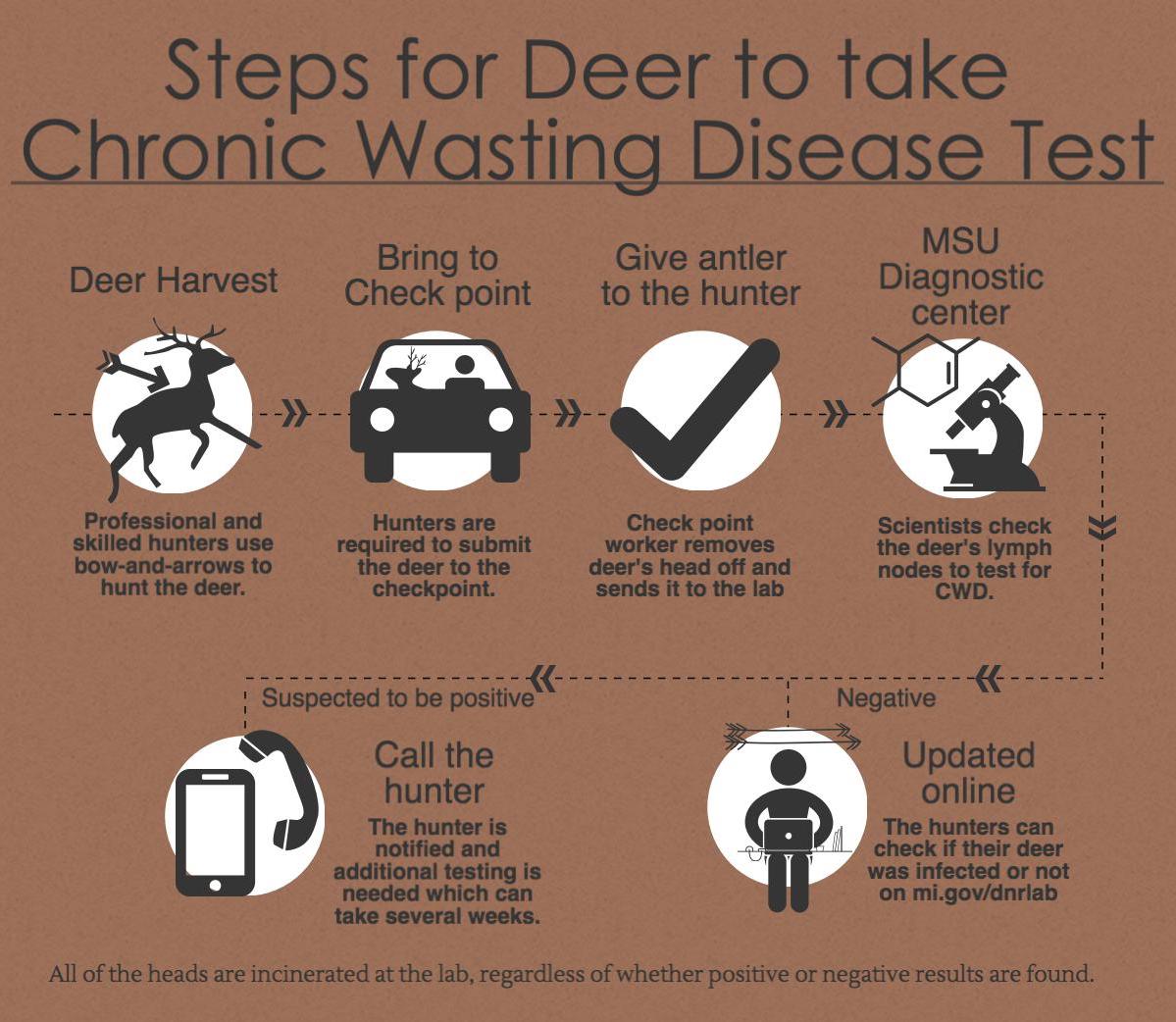 Courtney D. Chapin is the Communications Manager at the Diagnostic Center for Population & Animal Health at MSU. Chapin reported that hunters are also able to keep the deer heads after they bring them to the checkpoint, but it takes a special procedure to do so.

“The DNR advises hunters that want to have their deer mounted to ask about options when they are at the check station. They are able to work with hunters to get the samples that are needed for testing while still allowing the hunters to get the mount they want,” Chapin said.

DNR Wildlife Biologist Chad Fedewa works at the Rose Lake field office which serves as one of the check stations, and prepares the deer to be sent for testing. In the video below, he explains the process and how the disease spreads.

According to the Michigan DNR, the deer heads are sent to the Michigan Department of Natural Resources Wildlife Disease Laboratory Diagnostic Center for Population & Animal Health where they are tested on. The lab removes three lymph nodes from the head and then are tested for CWD. It takes approximately 5 hours for three batches of samples to be tested. All deer heads tested are incinerated on-site no matter the result.

The Michigan DNR released a video explaining the in-depth process of testing the heads, however, viewer discretion is advised, as the content may be uncomfortable for some viewers.