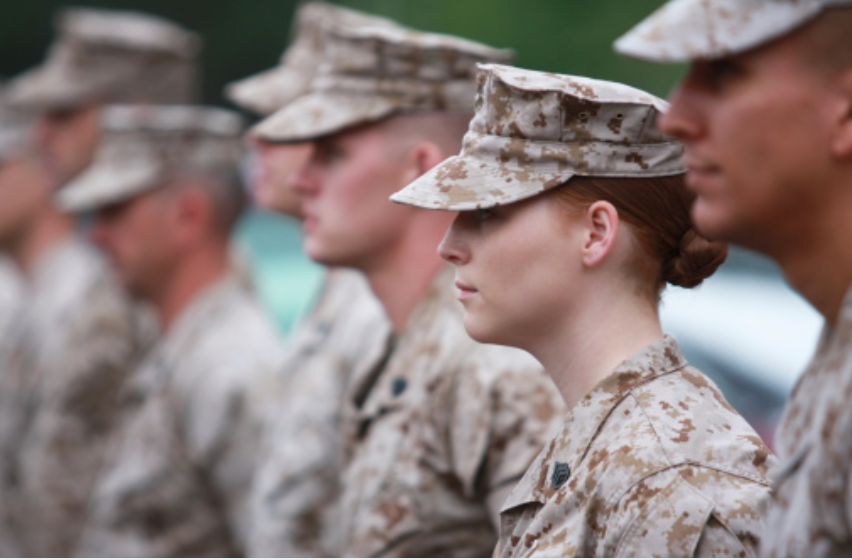 Women account for 15.3% of active-duty personnel in the U.S. military

A hot topic during this election year, politicians, active military personnel and veterans alike have opinions on women in combat.

Deborah Sampson is the first women in combat documented in the U.S. In 1781, Sampson served in Gen. Washington’s army, disguised as a man. She enlisted at Uxbridge, Massachusetts and was quickly promoted to sergeant. She was given the hardest and most dangerous task, which consisted of marching through the neutral ground, which is now known as Westchester County.

After a year of serving, she and two other sergeants led 30 infantrymen into neutral grounds. During this time, she suffered a wound on her forehead and a bullet to her upper groin. She fixed these wounds herself, without her disguise showing. She was fit enough to join the battlefield again.

Throughout the two years of many close calls, her identity as a women remained hidden. Sampson relied on quick thinking and sly coverups in order to keep her disguise. In the summer of 1783, Sampson was injured, became unconscious, and was taken to the hospital. While Dr. Barnabas Binney was treating Sampson he discovered her true sex.

Binney relayed the information he discovered to Gen. Patterson. Sampson admitted she was a woman. Patterson was so impressed with her service record he released her with an honorable discharge from West Point, New York. In 1783, she returned to her home in Massachusetts.

The years Sampson was enlisted in the military perplexes researchers and inspires others, due to the good deed she did for her country.

What does Sampson’s story have to do with women in the military today? The overview of women in combat was a matter of discussion among the candidates for 2016 presidential election. The role of combat is still debated today and is sharply divided by gender and political parties. From those who have served, and currently do serve, their viewpoints create stances that may not have been thought of otherwise. The United States election was not only for president, but also which political party will set the schema with military issues for the next four years. Michigan State University alumnus and current Marine officer in training, Stuart Kowalczyk, supports women in combat, but recognizes that biological differences between the two sexes can create problems. He believes that women can be more valuable in positions other than combat.

“This is not about feminism, but it is just about better tactics,” Kowalczyk said. “I absolutely do believe that women have the mentality and strength to be in the military, including the frontline. But what it does come down to is how the female body is built up. We are just biologically different. Men’s pelvis’ are smaller than women’s, which allows men to carry heavier things.”

In December 2015, the Pentagon opened up all positions in the military to women, including combat. Though there is equality in roles, the tension between gender roles is still present.

Physically, men and women are not the same. Researchers from the “Journal of Applied Physiology,” found that men are stronger than women on average. While men have an average of 26 pounds of muscle mass on their bodies, women have 40 percent less upper-body strength and 33 percent less lower-body strength than men, on average. The height differences of males and females only deal with half of the reasons why men are stronger than women.

The researchers had also found that men have a stronger grip and run faster than women. However, women have better endurance than men, an advantage in some physical tasks. Since men have more muscle mass than women, they have to work harder than women do.

Kowalczyk’s beliefs are based on biological principles and science, but women are key players in other non-combat roles.

“Obviously, being a nurse is a great part of the military, but they do have to go through battle testing,” he said. “Other than that, there is a program they use in Afghanistan called Lioness. But in general, I am fine with women in the military. I even think it is cool they are changing the uniforms to be more gender neutral.”

The Lioness Program in Afghanistan is an extremely vital operation. Since men are forbidden to talk to or look at local women, female soldiers are used to engage and communicate with the local Afghan women. The women in this area make up half the population, which is where the female engagement teams comes in. The Marine Corps created this program almost a half a decade ago to develop trust within the Afghan population to advance themselves as troops.

“I do support that,” said former Democratic presidential candidate, Hillary Clinton, in regards to women in the military.

Clinton is in favor of women being included in the draft and supporting the all-volunteer military effort. She believes that United States succeeds in this part of the military.

On the other hand, President-elect Donald Trump, does not support women in combat due to the outstanding number of sexual assaults and rapes. Approximately 6,083 reports of sexual assaults were made from service members in the fiscal year of 2015.

The numbers are significantly higher than anyone had previously thought, but according to statistics, the number of sexual assaults and rapes dropped in 2014. The U.S. Military had reported that 23,000 men and women have been sexually assaulted. Now this is an issue that deals with both men and women. Emma Niemeyer, a student in Michigan State University’s ROTC program, feels as if Trump’s beliefs on women in the military should not be factor in joining the military.

“I do not believe that should be the reason why women can’t serve,” Niemeyer said. “Today, there is always an issue with something, whether it is race, equality, or sex. There are steps and measures we can take to prevent it, but at the end of the day it will happen.”

For the past 15 years, women have been serving in Afghanistan and Iraq, but were barred from certain combat roles. Since then, the Pentagon has opened all roles to women.

“We need women in the force to accomplish certain missions that men are not the best at and or capable of,” Neimyer said. “This is the 21st century. We work together for the common good and we are fighting to protect our great nation of the United States of America. Any citizen that believes and is willing to support that belief should be willing and able to serve.”

“When I joined the Navy in 1983, the total force size was approximately 570,000 of that there were around 51,000 females,” said Brad Shee, a veteran of the U.S Navy.  “At that time their roles were quite different than today. While the Navy had over 500 serving in 1985, only a few had women on board and their roles were mostly in support functions such as administration, medical and other non-combat type jobs.”

“By the time if left the Navy in 2015, I found that the way women were treated had evolved positively, but there were still some people who treated women different,” Shee said. “I believe it was mostly because of the good ole’ boy’s didn’t want their traditional ways of doing things interrupted by the evolution of change.”

The evolution of change

The issue of having women in combat was a hot topic in 2016 election.

What agenda will be set in the succeeding four years of the Trump administration? Only time will tell.