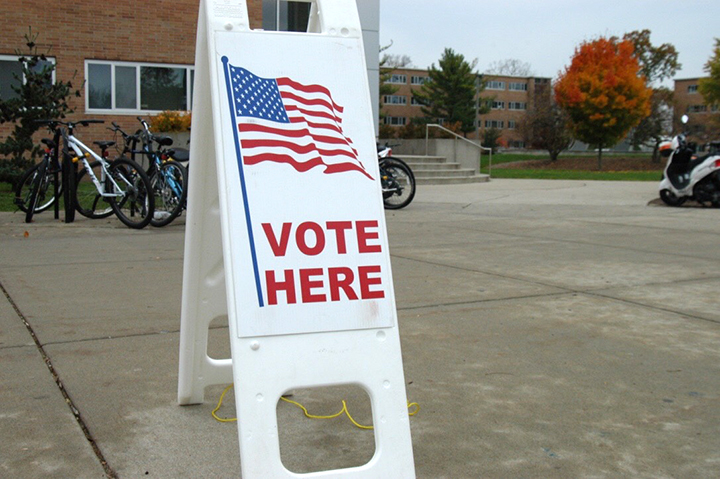 Some campus voters found themselves in long lines to vote, as the nation watched Michigan and other key battleground states in the race to decide the nation’s next commander-in-chief.

Polls across the state are open until 8 p.m. Michigan has become a key battleground, with the campaigns of Republican Donald Trump and Democrat Hillary Clinton making numerous visits to the state in the past week.

Look up your ballot at the Michigan Voter Information Center: michigan.gov/vote

Some campus polling locations reported long lines throughout midday, amid strong voter turnout throughout the region. A wait of up to two hours was reported at 1:30 p.m. at IM West.

“I think the discourse Donald Trump is spewing is really toxic, and with Hillary we can accomplish more,” said Chris Dubbs, 28, a mathematics doctoral student from Milesburg, Pennsylvania.

But Tayler Lossee, a physiology junior from Clarkston, said she was turned off by Clinton’s email scandal.

“I think Trump is more looking out for everyone in the economy,” she said. “I think he wants to help the middle class, and I like that he understands that people need help here.”

Clinton’s lead over Trump — once as high as 11 points — has tightened to 4 percentage points, 42 percent to 38 percent, according to polling by Lansing-based EPIC-MRA for the Detroit Free Press.

“The choice in this election could not be clearer,” Clinton said during her Monday afternoon event. “This election is basically between division and unity.

“It’s between strong and steady leadership and a loose canon that puts everything at risk.”

But some voters were turned off by a campaign between two major party candidates they deemed flawed. John Bower, criminal justice sophomore from New York, said he didn’t vote.

“I don’t like any of the candidates and I’m not going to vote for Gary Johnson,” Bower said. “I’m a registered Republican, but I’m not a fan of Donald Trump and I’m not a Hillary Clinton fan at all.”

Area voters also will cast a ballot for a variety of state and local offices, as well as local proposals.

Voters may be asked to show photo ID when they go to vote, but may sign an affidavit if they do not have identification.

Locally, voters will select representatives in the 67th, 68th, 69th, 71st and 93rd state House districts, as well as members of the state Board of Education, state university governing boards and the Michigan Supreme Court.

In Ingham County, voters will select a new prosecutor to replace Stuart Dunnings III, who resigned earlier this year, and a new sheriff to replace Gene Wriggelsworth, who is retiring.

The MI First Election team will have complete coverage of the election throughout the day, including live video and reporting from across the region, at http://news.jrn.msu.edu.