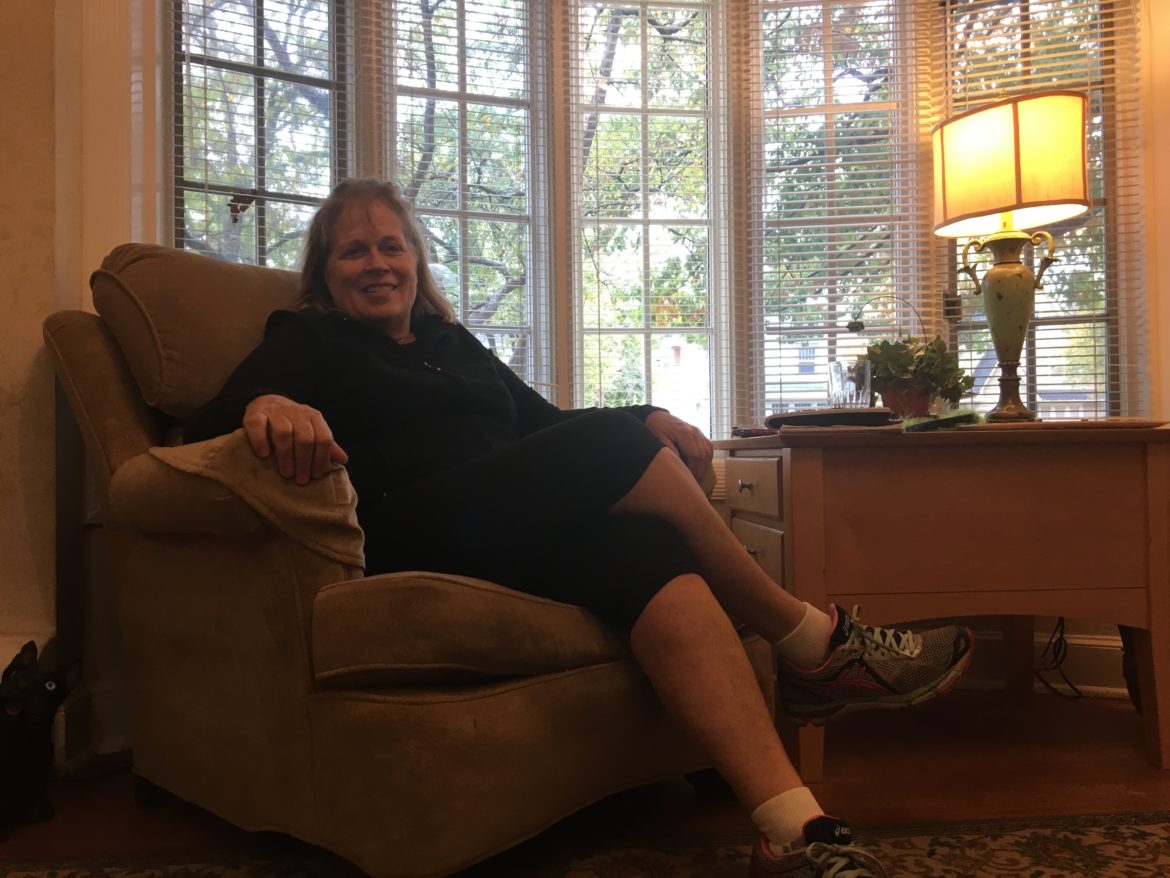 Jan Lynch sits down with me at Sigma Kappa to talk about elections of the past and the upcoming election.

Election day is nearing, and we are well aware of issues that concern millennials, such as the environment and student loans. Baby boomers are getting less attention as they grow older. I sat down with 72-year-old Jan Lynch to get her take on this year’s election and the issues she, along with others around her age, care about. Jan Lynch sits down with me at Sigma Kappa to talk about elections of the past and the upcoming election.

Austin Short: Hello this is Austin Short, I’m sitting here today with Jan Lynch, House Director of Sigma Kappa. How are you Jan?

Jan Lynch: I’m great Austin thank you for coming over and interviewing me.

AS: Oh well, thank you for letting me do so. So is it true that you have been working election polls for a while now?

JL: Yes, I’ve been involved working at different precincts throughout East Lansing for a number of years. I’m not doing it this year for the presidential poll, but I have worked the presidential election before at the Brody Complex, the Bailey school complex, and it’s very educational and it’s an interesting process. And I always find it amazing now this year, when Trump keeps saying it’s all rigged. I’m not sure what planet he lives on, but there is no way it could be rigged and you could fudge because it is so controlled. It’s an amazing process and I always encourage everyone if you have doubts, volunteer, get the training, go work at a poll.

AS: That’s awesome. So I have a few questions for you about elections from your experience voting, since you have probably voted in more elections than I have been alive for, I think. But I will start off with which issues are most important to you in the presidential election?

JL: Well the issues that I connect probably most with is, being a woman, is the threat of the Supreme Court not allowing Obama to fill the vacancy and Trump screaming that he’s going, you notice I’m not a Trump supporter? Trump stating that he will reverse Roe V. Wade. And that’s the abortion issue and that’s all about women’s rights to decide what they can do with their body. So that’s huge on my list. Also medical care, that’s one of my things. I lived five years with national insurance and it works very well. I think we need to tweak it but for them to say, for Trump to say if I get elected the first thing I will do is, get rid of Obamacare. I think that’s crazy. I think there are some issues that need to be fixed on that but I think Hillary has the right approach. We need to fix, not throw the whole thing out. That’s important. What else? I guess it’s just about the women’s, women’s rights and women equality. *cough* Excuse me. And the Obamacare.

AS: Do you have, do you have thoughts on social security?

JL: Well yeah cause I’m part of that. You know what, it’s like everything in life. I look at it and I go, well it might need to be tuned, it might need to be reviewed in some things, assets, but it’s working and why are, why are you throwing it out, or want to throw it out or disassemble it and not repair it? Because it has worked. Yeah, FDR started social security. I’m not good at my history but he started it. And um, it works, it works. Probably my biggest concern on the issues is the one candidate has words like all, never, everyone. I call it his, um, what do I want to call it?

JL: Absolute. He just shouts things. It’s all for the camera. And he thinks he’s on a reality show. So when he says all my employees have trouble with Obamacare, he only has five percent of his employees on Obamacare out of the 100 percent. And why does he have employees on Obamacare? He should be paying them enough to have a living wage and he should be covering them, so. It drives me nuts when he does those shout outs. I call them Rush Limbaugh shout outs, reactionary, ya know, Make America Great, well how? So the issues drive me, yeah. Those are probably the only two issues I’m concerned about.

AS: Do you think that the issues you care about most; do you think those have changed from when you first started voting until now?

JL: Yeah. A lot of things have changed since I first started voting. It’s much easier to vote, to register to vote. You know, it is your right, and it’s such a privilege to have that right. So I’m pleased that it’s been made easier. You can register to vote; you can do the absentee ballots now. It’s just very encouraging to get people to vote. But what has changed those issues, yeah. When I was a young woman, you couldn’t get an abortion. It was all illegal on the back corner. Health care is huge with me. I think everyone should be entitled to health care and not have to be bankrupt if they have a long-term illness. So I think those are probably the two, and they have changed. It’s gotten better, and that’s why I say you don’t throw it because there might be a little tweaking that we have to do. You don’t just restart.

AS: So, we’re going to change topics a little bit, but how do people your age form opinions on candidates now, compared to when you first started voting? Because I know people my age, we’re using social media a lot more to get our information, whereas that wasn’t around for you so.

JL: Yeah, yeah. Well that’s huge. I’d say that’s how people do their, social media is great if you remember that whatever people put out there, it doesn’t mean it’s necessarily true or accurate. And so that’s my, but it’s great because you have information at your fingertips. You can google Hillary Clinton and see what her view or policy is. And before that was never available to you unless you read it in the newspaper or at the library. So I think you can become a much more educated voter now, and you can go, like my friend said, I did absentee because I got my ballot. I went home, I studied the people, I figured out who these people, like board of regents ya know. People just vote usually for, because it’s the party because they have no idea who they are. I love that part. Before it was newspapers and campaigns and very little on TV. I mean the TV has come into huge. The negative ads, that drives me crazy, but I can’t control that. And it drives me crazy when they don’t tell me who they, what they stand for. It’s just they attack the other person and then they say vote for me. I go, I just heard negative things, tell me what you can do as a person.

AS: What do you think has been the most fascinating election that you have ever witnessed? Is it this year’s election or is there something else that you would point towards?

JL: I think this is the top one. It’s something that you, none of us will probably ever see in our lifetime. I don’t understand how it got to where we are at with the Republican party. I think they thought it would go away, he would go away. Well it didn’t. How the rest of the world sees us too is fascinating. I have friends in London and they are just fascinated by this whole process. And of course their process is a little bit different. They elect a party and then the majority, whoever holds the majority in the, in their chambers, that’s who the prime minister is. So they don’t have this conflict where the Republicans control the House and you have a Democratic president. They don’t have that. So they’re just fascinated, and are fascinated that Donald Trump, they’re not real keen on Hillary. But they said, you know, it’s better than the other option. And I forgot what they question was. *laughs*

AS: Which election was most fascinating?

JL: Oh thank you, I will get back on track here. So this one is fascinating on so many different levels, but I think I remember, it was very interesting when Kennedy ran against Nixon, and Kennedy was the first Catholic candidate. And that was a huge issue, massive issue back then. And that was, the first debates that were televised and you saw the candidates and so that was kind of a cutting edge back then.

AS: And Kennedy looked so much younger than Nixon, partially because he put on make-up during those debates.

JL: Yeah. And they used it. TV was kind of a new, I know this sounds crazy but it was pretty new. The stages, the TV (cough) Nixon had beads of sweat on him and looked very shifty, and Kennedy was very polished. But I remember people saying I won’t vote for Kennedy because he’s a Catholic, and now people would probably say what? Are you kidding me? And all political stuff, but that was pretty fascinating. And Gore and Bush, that battle, that was like are you, are you serious? Ya know, the state of Florida. So but, on every level, this one, we’ll never see it again. I hope we will never see it again.

AS: Alright well thank you for your time Jan, it’s been a pleasure, and

I will see you soon.

JL: That was easy, thank you.