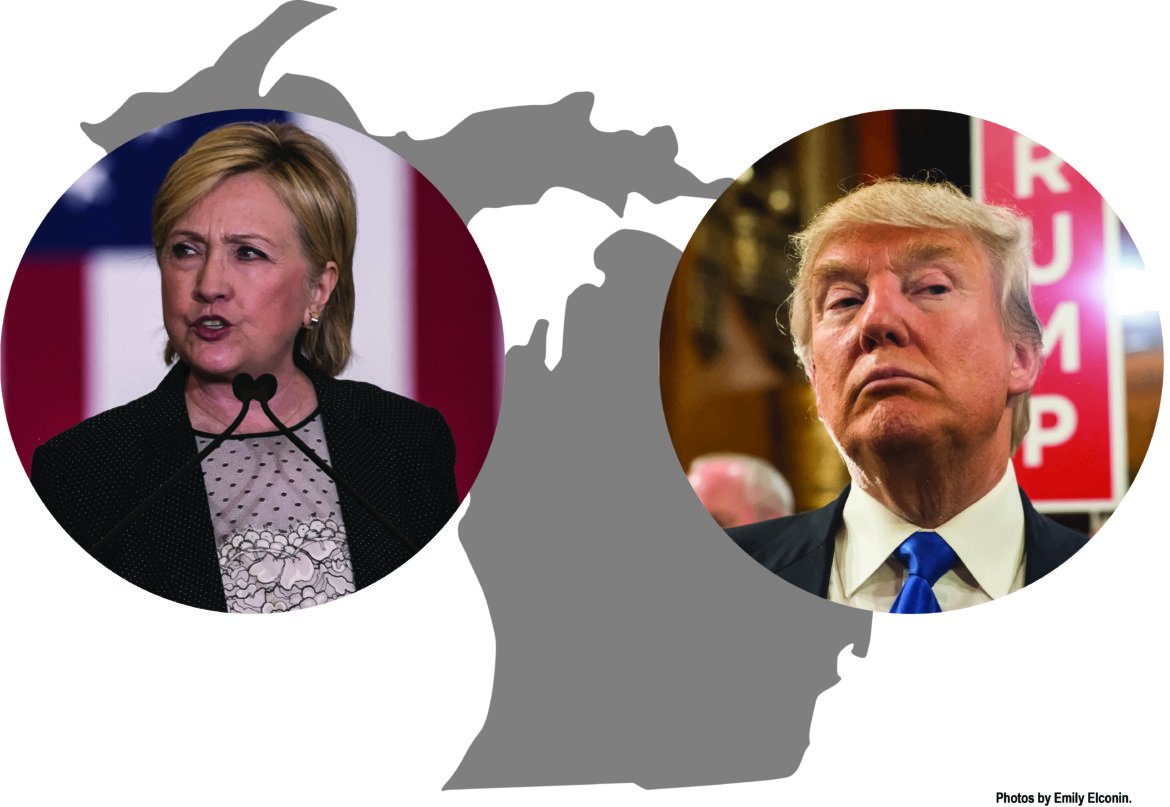 Hillary Clinton and Donald Trump struck conciliatory tones Wednesday, after Trump pulled off a stunning upset in their battle to be the next president.

By 3 a.m. ET, Clinton had conceded, Trump had declared victory and Michigan was still trying to find its winner.

When all votes were in, Trump carried Michigan by 13,225 votes out of about 4.8 million. Results are unofficial until verified by the state.

“Now it’s time for America to bind the wounds of division,” Trump said during an early morning victory speech. “To all Republicans and Democrats and independents across this nation, I say it is time for us to come together as one united people.”

Clinton conceded the race by phone to Trump shortly before his speech. On Wednesday, she apologized to her supporters for the election outcome.

“I know how disappointed you feel because I feel it too, and so do tens and millions of Americans who invested their hopes and dreams in this effort,” she said shortly before noon.

“Let me add, our constitution democracy demands our participation not just every four years, but all the time,” she said. “So let’s do all we can to continue advancing the causes we all hold dear.”

The Detroit Free Press reported that, at 8:25 a.m. Wednesday, with all but seven precincts counted in Genesee County, Trump held a 12,488-vote lead over Hillary Clinton. Michigan has 4,830 voting precincts.

Michigan was one of only a few states that had not had its votes placed in one basket or the other by major media including CNN, Fox News, The New York Times or RealClearPolitics.

“I voted for Donald Trump because I believe that he will change the political landscape of the United States,” Michigan State University criminal justice freshman Matthew Fergle said.

Mechanical engineering major Andy Stamm said, “I am voting for Hillary because I don’t believe that Trump is qualified to be president, and I think Hillary has a lot more experience in government and would be a better fit.”

Other students believed neither candidate was worthy of a vote.

“I actually did not vote in this election,” criminal justice sophomore John Bower said. “I don’t like any of the candidates and I’m not going to vote for Gary Johnson. I’m a registered Republican, but I’m not a fan of Donald Trump and I’m not a Hillary Clinton fan at all.”

In the 1996 to 2008 presidential elections, Michigan favored Democratic candidates, In 2016 Michigan has 16 electoral votes on the line in the race for the 270 needed to win.

However, Michigan has become a battleground for presidential candidates Hillary Clinton and Donald Trump during this year’s election.

Fox 2 Detroit reported that Clinton had a 5-point lead in Michigan on Nov. 3.

One day before the election Clinton went from a 5-point lead in Michigan to a four-point lead, according to the final Fox News national pre-election poll of likely voters.

To sway voters to swing their way Clinton and Trump have not only made final-day appearances in Michigan, but have sent in surrogates throughout the preceding week.

Donald Trump Jr. and several other family members spoke on behalf of Trump.

Clinton had well-known celebrities such as Lady Gaga and even the current president of the United States vouch for her.

According to the Detroit Free Press, Trump was counting on Michigan’s large-blue collar workforce, which has been hurt by manufacturing job losses to vote him into office.

“We are going to bring back the the automobile industry to Michigan, bigger and better and stronger than before,” Trump said during his final speech.

Obama called Trump “uniquely unqualified to be president” when speaking at the University of Michigan Nov. 7.

According to the Detroit Free Press, Obama said that his administration’s success, which include the rescuing of the domestic auto industry in 2009, should have earned him the right to give Michiganders advice for what’s best for them and the nation.

“Plant’s that were closing when I took office are working double shift now. …When I tell you Donald Trump is not the guy who is going to work for you, you need to listen. … Don’t be bamboozled,” he said.

Even after his speech, the Trafalgar group Michigan presidential election survey reported that Trump had a 1.7 percent lead the eve of Election Day.