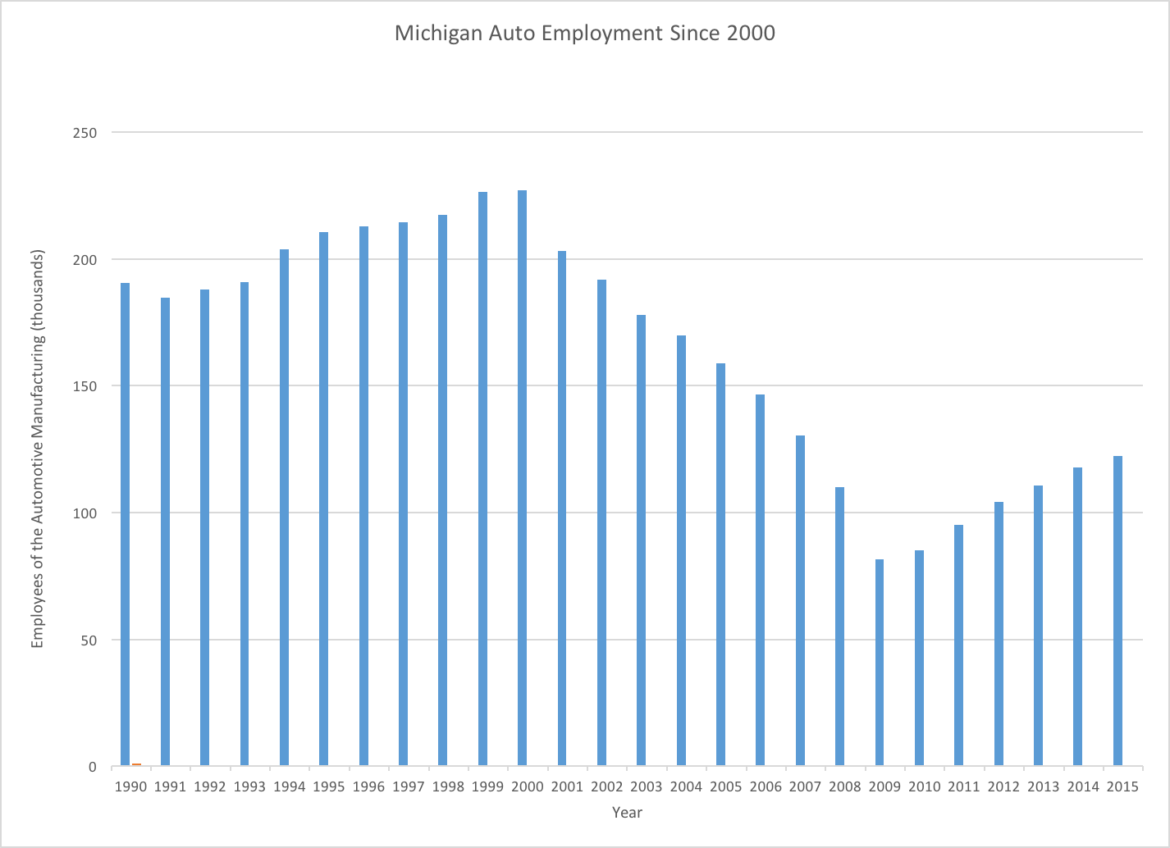 Following the 2008 recession, jobs have slowly been returning to the auto industry.

Michigan has experienced six years straight of automotive sector growth, according to an analysis of Bureau of Labor Statistics data.

After plummeting to a 21st century low in 2009, the 2015 rate again marked improvement in employment, with about 122,400 Michigan workers in the field compared to 117,600 the year before. In the Nov. 8 election, both major-party candidates have promised to preserve the boom.

When in Michigan, both Republican nominee Donald Trump and Democratic nominee Hillary Clinton keyed in on the issue of manufacturing strength as a point of persuasion for undecided voters. During a summer speech in Dimondale, Trump depicted a dismal state of the Michigan economy and in particular with respect to the automobile manufacturing sector.

“The Michigan manufacturing sector is a disaster,” Trump said. “You’re losing your businesses. It’s like taking candy away from the baby.”

However, the stats contradict Trump’s claim. Michigan’s automotive industry grew 4 percent in 2015 and is on pace to grow again in 2016. Michigan State University professor of economics Charles Ballard said that without President Barack Obama’s automotive surplus package in the heart of the recession, it’s possible that the automotive economy would never have regained its pre-2008 prosperity. Following the 2008 recession, jobs have slowly been returning to the auto industry.

“There’s a very real chance that without that bailout or rescue, the auto industry in the United States and Canada… would have had a hard landing,” Ballard said, adding that it is impossible to know for certain what would have happened had the bailout not occurred. “Probably what would have happened in a hard landing like that, many of their suppliers would have gone out of business… and the supplier doesn’t just provide supplies for GM, they also supply supplies for Ford. And then Ford would have production cramps and might have been forced into bankruptcy, as well.”

Opposite to Trump, Clinton has gone on record praising the economic recovery stimulus issued by Obama, and her alignment with the Obama administration has caught the eyes of Michigan automotive unions. Citing her support of collective bargaining, opposition to the Trans-Pacific Partnership and advocacy of revised overtime laws, UAW president Dennis Williams declared the union’s preference in a press release out of Detroit.

Of course, the automotive business is far more entrenched in Michigan’s economy than just in Detroit. Valerie Marvin, vice president of the Historical Society of Greater Lansing, said that large automotive conglomerates were often the harbingers of prosperity or ruin in Michigan’s capital city.

“As the auto industry declined, it was very difficult because for many people who grew up here, it was the ticket to the middle class,” Marvin said. “A lot of people grew up believing that all they needed was a high school education. They could get a job in one of the factories and they could be set for life, just like Dad, just like Grandpa, just like Uncle so-and-so. And as those jobs started to go away, the trouble is we have a workforce that was not as highly-skilled because they did not need to pursue an education past high school.”

Marvin said that the high time for Lansing automotive sector employment was in the 1950s and ’60s. According to the city of East Lansing’s official website, GM now employs 5,800 Lansing-area residents. The rate of job production has begun to slow in Michigan’s automotive manufacturing sector.

The automotive sector still trails far behind its historical productivity. From 1990 to 2015, the median employment from Michigan automotive factories was higher than 181,300 employees. Despite six years and counting of productive recovery, barely above 125,000 Michiganders are working in the field as of September.

“The security of those jobs — as they existed in the fifties and sixties – -doesn’t really exist any more,” Marvin said. “It’s caused a bit of an identity crisis in Lansing, because many people identified Lansing as being a sort of blue-collar, factory town because of the auto industry, and those blue-collar jobs have diminished.”

According to Ballard, the previous abundance of car-production jobs is unlikely to be restored no matter who is elected. For all of the splendor of campaign sweet talk, once a certain ceiling of technological progress is reached, job creation inexorably disappears and job availability wanes.

“Remember that in the dark days of 2009, North American auto sales had gotten up to 16 million, 17 million, that ballpark. They plummeted below 10 million for a while,” Ballard said. “Now they’re back up over 17 million. Now the question is: How much further can you go, and is there any government policy that could help? I think we’re close to the top.”