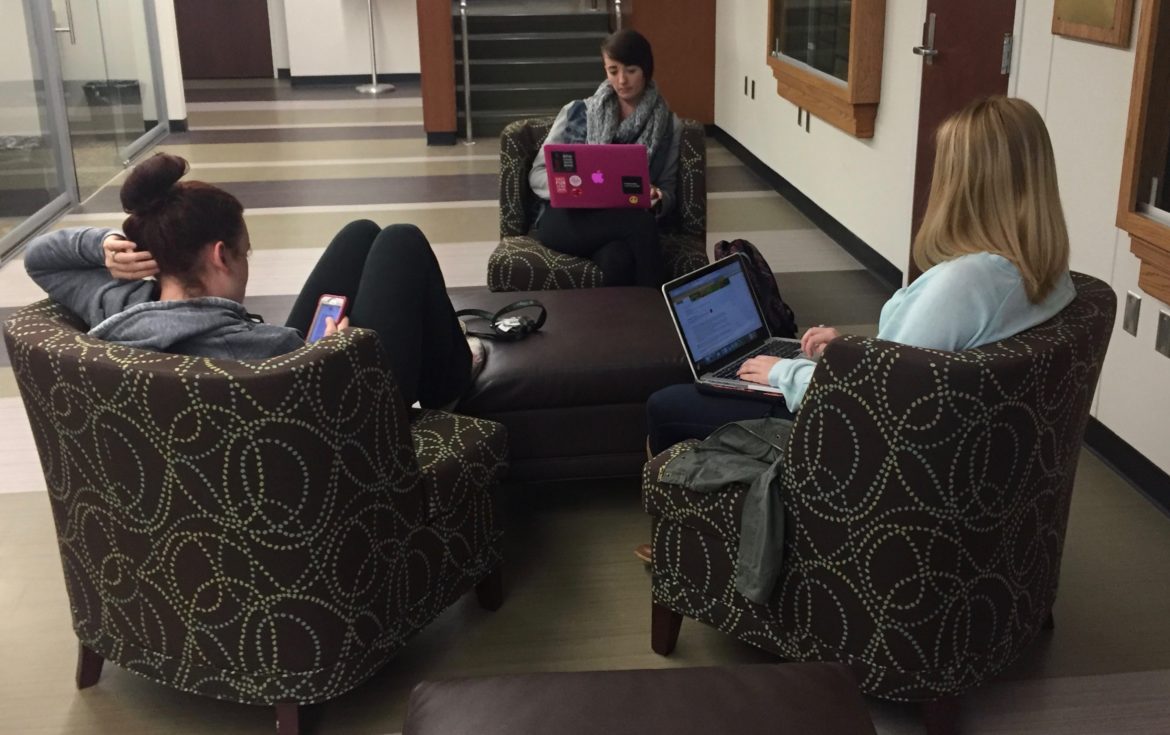 Her Campus editor-in-chief Caitlin Taylor and PR director Katie Kochanny during weekly executive board meeting at the MSU Union.

As social media strengthens an inclusive and intersectional dialogue online, many argue that we’ve entered a new, fourth-wave of feminism.

Elanur Ural is proud to identify as a feminist.

Sitting in her women’s studies courses at MSU however, she finds it challenging to express her own voice in the convoluted discussions surrounding feminism.

Among the classroom dialogue, the international relations junior said her experiences as a Turkish Muslim woman are often overlooked.

“Sometimes when we bring up the concept of feminism and women of color, it’s brushed under the rug,” she said.

Although a textbook discussion of feminism may focus on any of the waves that took place between the late nineteenth century and the present, social media has created a new space where concepts of inclusivity, intersectionality and empowerment are shifting feminist dialogue and redefining the movement all together.

According to a national survey conducted by the Washington Post and Kaiser Family Foundation, 60 percent of women identify themselves as feminists. Additionally, the study shows that 45 percent of women between the ages of 18 and 34 actively speak about gender equality on Facebook, Twitter and Instagram, while 83 percent of this demographic believe that feminism is “empowering.”

As a result of social media’s momentum and the positive connotations surrounding feminist rhetoric online, many argue that we’ve entered a new, fourth wave of feminism. While this remains a controversial topic, the concept of a new wave demonstrates the power and influence of social media in today’s ongoing movement.

During the late nineteenth and early twentieth centuries, first-wave feminism was focused on securing equal property and voting rights for women. Inspired by the simultaneous civil rights movement, the second wave from the 1960s to the mid-1980s began to discuss gender inequalities concerning the family, the workplace and reproductive rights. Despite the broadened scope of issues being addressed, this second wave was often referred to as the Women’s Liberation Movement and was criticized for creating a collective identity.

“When you have a universal sisterhood, it erases important difference and it colonizes from a very white, middle class perspective,” said Jacqueline Rhodes, MSU professor of writing, rhetoric and American cultures.

Discrediting this stereotypical view of second wave feminists, the movement of the 1990s demonstrated clear efforts to account for differences and include the voices of marginalized women. Feminists of this third wave introduced the term “intersectionality” by choosing to acknowledge various identities and show sympathy toward individual experiences in the fight for gender equality.

“It’s not just enough to say that we have different sexual orientations, or we come from different classes, races or ethnicities,” said Rhodes. “Intersectionality is probably the hallmark of the feminism movement right now, which is great because instead of having one group speaking with a voice that’s supposed to include everybody, you have multiple voices speaking truth. If you’re a responsible feminist, you have to try really hard to listen to the truths that are out there.”

Since the beginning of the feminist movement, using written text to organize gatherings, protests and the like have been at the center of progress. According to Rhodes, the manifestos and posters printed in the 1960s and 1970s are equivalent to today’s social media. While this same impulse exists, social media has increased immediacy, reach and access in this new wave.

Expressing ideals of gender equality using hashtags on Twitter is one powerful example of how activism and social media now work hand-in-hand. According to data published by Twitter, the platform’s conversation surrounding feminism increased by over 300 percent between 2012 and early 2015.

Beginning in 2013, the conversation of intersectionality was able to reach the masses and spread globally on Twitter. #SolidarityIsForWhiteWomen and #MyFeminismLooksLike gained momentum as both women and men shared their frustrations on the marginalization still prevalent in the modern-day movement.

As a result of this new term, “hashtag activism,” the feminist movement has become less of a political-based fight for women’s rights, and more of a cultural movement fueled by the democratization of conversations and the expression of feminist ideals online.

“You’re accountable for your words now on social media in ways that you might not have been before because they’re there forever, and they can go viral,” said Rhodes. “I mean, you’ll get called out on your privilege quickly and I think that contributes a lot to the new feminist culture.”

Virality is one element of social media that plays an increasingly significant role in today’s feminist movement. According to Rhodes, a key difference between the political movements of the 1960s and today is that virality allows individuals to spring into action in multiple locations before the “media moment” is lost.

An example of this “action” is the SlutWalk movement that began in 2011 in Canada. This Canadian walk focused on ending sexual violence sparked similar “SlutWalks” throughout the United States, as well as in Australia, New Zealand and Britain.

“The technology shapes the politics,” said Rhodes. “There’s a lot of ‘do it yourself’ feminism, where you decide for yourself what your stance is. You work in temporary collaboration with people.”

“We’re moving past that, and I think feminism is addressing the damage a collective identity can have,” she said. “I think that moving forward, the more we continue to be about ourselves and know why we’re doing what we do, the movement will be more of an individual stride.”

For Taylor, this individualistic approach means calling out racism, gender inequality and other social constructs in one’s own social groups both online and in person.

“I think that’s more powerful now than rallying at the Capitol building,” she said. “You’re not being a passive bystander.”

As the editor-in-chief of MSU’s online women’s magazine called Her Campus, Taylor understands the importance of using one’s personal experiences to bring context to the implications of gender inequality.

In addition to publishing relevant articles on its website, the women writers at Her Campus create awareness and educate students specifically using social media. Last year, they held a bake sale to raise awareness about the ongoing wage gap by posting surprising statistics and facts during the event.

“Social media is great as far as putting the issues out there, because it’s so global,” Taylor said. “It’s the one place that people are guaranteed to at least scroll by, if not read it.”

The male voice in feminism

As the new wave of feminism finds strength on social media, more men are taking the opportunity to join the conversation. For MSU social relations and policy student Mitchell Timmerman, it wasn’t until college that he started identifying as a feminist.

Frequently walking home from the library with other students, Timmerman never understood why his women friends walked home together in large groups late at night. Once his friends explained this behavior was for their own safety, Timmerman gained a new perspective.

“At that point, I think that’s when the lightbulb turned on,” he said. “This is an issue that women face everyday. I’ve never had to walk with someone and be conscious about protecting myself.”

Using his own accounts to raise awareness about gender inequalities, Timmerman sees social media as a helpful tool in addressing the dichotomy of the current feminist movement.

“If I have friends posting things they care about, then I get to figure out how I can lend my voice,” he said. “Men need feminism just as much as women need it.”

The election’s impact on feminism

In Rhodes’ opinion, it will be roughly 10 years or more before we can evaluate the degree to which Clinton is impacting this new wave of feminism.

“I don’t think you can underestimate the significance of Hillary Clinton walking out on stage as the first woman in a presidential debate,” said Rhodes. “It’s unfortunate that her politics aren’t perfect, but you go with the historymakers you have and they aren’t always ideal.”

While Ural acknowledges that women in political power help to strengthen the feminist movement, specifically on social media, she doesn’t think the increased representation of women in any context is enough.

Despite the diversity of cultures represented in her women’s studies courses, Ural still feels the need to preface many of her beliefs during class discussions based on her ethnicity and religion. In her experience, many discussions emphasize the progress made by white women living in the U.S. rather than focusing on discrimination of all women, including minorities.

Aside from the progress being made by women everyday, Ural said a more inclusive and sympathetic approach to combating gender inequalities will always exist.