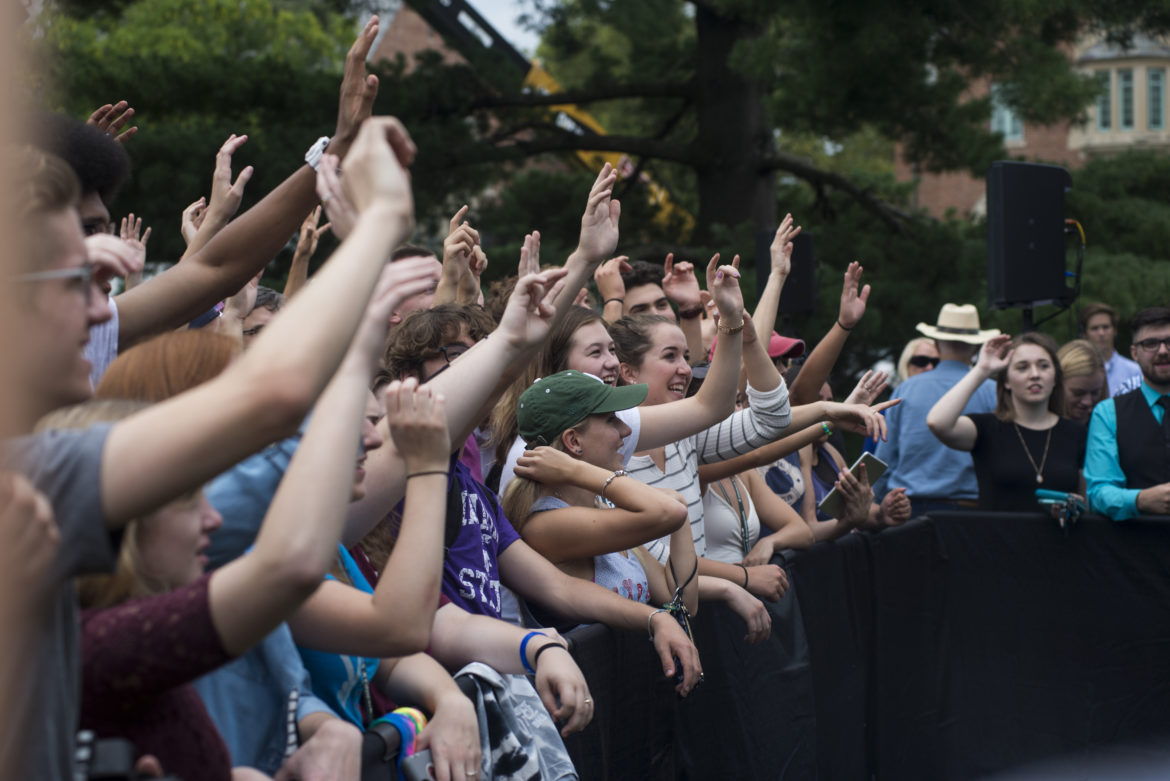 People cheer while a band plays before Sen. Bernie Sanders' appearance on Oct. 6, 2016 at Adams Field. People cheer while a band plays before Sen. Bernie Sanders' appearance on Oct. 6, 2016 at Adams Field.

College tuition these days is through the roof and students are stacking up thousands of dollars of debt.  With the presidential election coming up, students are wondering if they’ll ever see free tuition become a reality.

Students at the Oct. 6 Bernie Sanders rally at Michigan State University had a lot to say about free tuition.

Clara Wilson, a sophomore studying social relations and policy, said “I probably won’t see free tuition while I am a student. Personally, my parents are paying for college, so I won’t be in debt.  Yet, I still don’t think we can really have free tuition completely.  But, I do think community colleges should have free tuition and that the price of public university tuition should decrease.”

“I saw Bernie back when he came here in March and the idea of free tuition sounded exciting, but I was still skeptical,” Wilson said.

Wilson said, “Hillary Clinton probably won’t go through with free tuition, but it depends.  I don’t think she will be able to do that, but I think she can maybe bring some decreases, depending on how the Congress is looking.  If it’s divided again, then probably not.”

Audrie Adams, a freshman majoring in packaging, said, “I don’t think I’ll see free tuition while I am still a student, but maybe students at community colleges will.  I am paying for college with my dad’s money as well as loans, but I will definitely be in debt by the time I graduate.”

Adams said, “Free tuition would relieve a lot of stress for sure, but Hillary Clinton probably won’t go through with it.  College is a business, therefore tuition will always be high.  I don’t think they really need our money, but in order to get a job you must have a degree, so we are forced to pay it.”

Christian Perry, a sophomore majoring in English, said “I’m paying for college with the small amount of financial aid I get and private loans.  I will be in almost $100,000 of debt by the time I graduate.”

“I don’t think we’ll see free tuition any time soon.  Yet, free tuition would mean that all three of my younger siblings could actually go to college.  If I graduate with that much debt, my parents won’t be able to put any of my other siblings through college,” said Perry.

“I think kids who are 5 years and younger, when they get to college will absolutely see free tuition.  As for my younger sister who is in middle school, I don’t think so,” Perry said.

Perry said, “I think we have to pay so much for tuition because college is largely commercialized.  People who have money take advantage of people who don’t have money in an effort to force them to pay to get money in the future.”

Alyse Maksimoski, a senior studying zoology, said “I am paying for school out of pocket, as well as loans, grants, financial aid, and scholarships.  I won’t be in debt from my undergrad because of all the scholarships I have received, but I will be after grad school.  Grad school is a necessity for the career path I’ve chosen.”

Maksimoski said, “My little brother didn’t go to the school he wanted to go to because he didn’t get as much money and scholarships as he wanted.  He actually had to choose an in-state school that he wasn’t really sure about going to, but he ended up choosing it because it was a lot easier to go to.  He didn’t have to take out as many loans.”

“My brother really wanted to go to the other public university, but he wasn’t able to because of the financial situation we were in.  Optimistically, I think younger people will see free tuition, but realistically maybe.  I think that our generation’s children will see free tuition,” said Maksimoski.

Maksimoski said, “I’ve always been a Bernie supporter.  When I saw Bernie here back in March, I really agreed with the idea of free tuition.  Although I won’t graduate in debt because of how lucky and privileged I’ve been with the grants and aid that have been given to me, I know the situation for a lot of other people is something that is very dire and it is a major financial issue today.”

“A lot of us deal with different aspects of classism that go along with that and feel the effects of not being able to fulfill the American dream because of this,” said Maksimoski.

Maksimoski said, “I think there is an extreme pressure from past Bernie supporters, current Hillary supporters, and our generation to get free tuition because there’s a real push for that.  That’s the big issue that affects all of us.  I hope Hillary comes through and I think she will, but I also think there will be many obstacles.”

Maksimoski concluded, “I think tuition is extremely high.  Our tuition was raised this year and President Simon also gave herself a raise, so it’s kind of the question of correlation.  Most students will be in hundreds and thousands of dollars of debt.