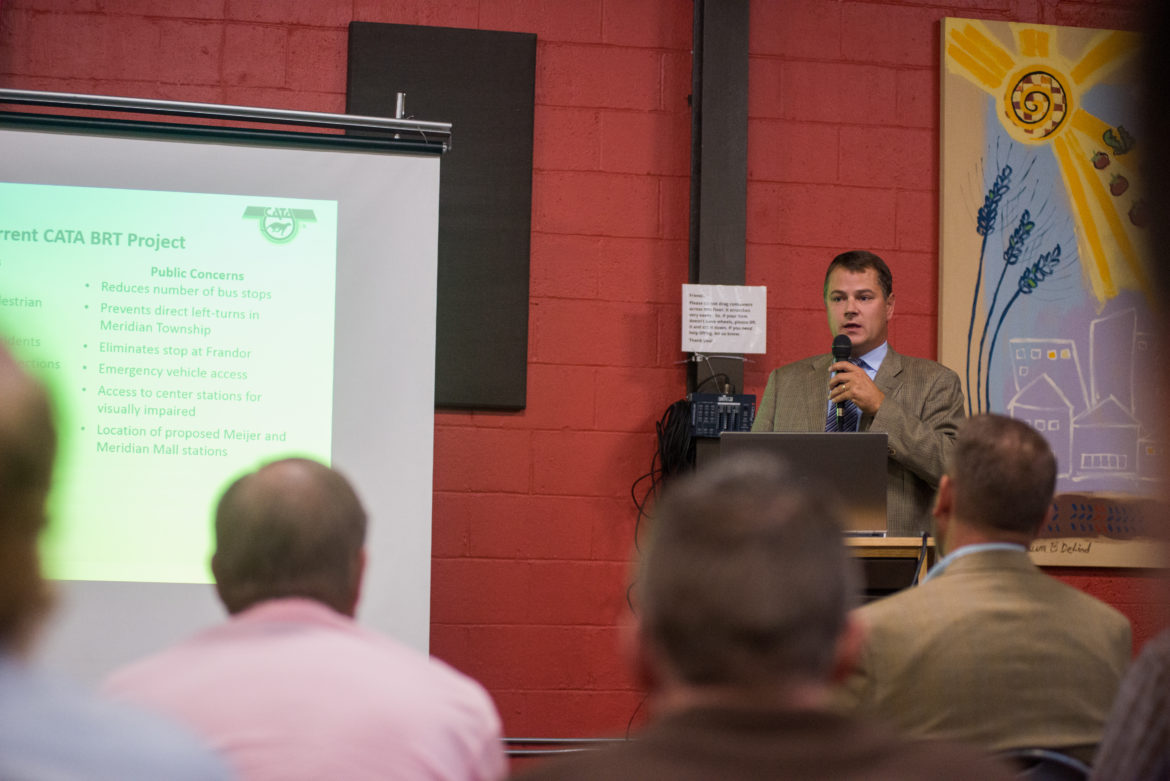 Capital Area Transportation Authority held three meetings to present modifications of its Bus Rapid Transport project to the public during the first week of October. The ideas are in response to community input at meetings in August.

“The purpose of these meetings is for us to respond to the public. They raised a number of concerns with the current design, and said ‘we don’t like the way it is currently designed,’” CATA Assistant Executive Director Debbie Alexander said. “So we came back with some preliminary thinking to address those concerns.”

The map shows CATA’s current BRT plan’s route. The blue circles show the signalized intersections where the stations would be located.

Current plan
The current BRT plan runs from the capital to Meijer and the Meridian Mall in Okemos. The BRT would replace CATA routes 1 and 4, as well as take over part of 48.

“The project is really about improving ridership along the corridor,” said Sean Kelsch, one of CATA’s consulting engineers and vice president of AECOM construction firm, “and to build infrastructure that can accommodate the growth we hope to see in the near future.”

With the current plan, dedicated lanes and a median housing the BRT stations would run down the center of the corridor. The current plan is 8.5 miles long, includes 27 stations. Fifteen buses would run at 6-minute intervals. The graphic shows a comparison of the current BRT route’s length with the presented ideas’ route lengths.

Some concerns raised in August concerned danger to pedestrians trying to cross to the central median stations, the reduction in stops and the increased difficulty of left turns. CATA addressed these concerns in a handout and presentations during the October meeting.

The engineers addressed safety by saying all stations would now be at intersections with stoplights. Those intersections would be updated to comply with the Americans with Disabilities Act, improving safety for all pedestrians.

Acknowledging that there will be fewer stops, the engineers said the stops would be one-fourth to three-fifths of a mile apart. Walking time would increase for some riders, but decrease for others.

The new plan would build a median, making direct left turns impossible. Vehicles needing to make a left turn would proceed to the nearest stoplight intersection and make a U-turn, similar to what is called a “Michigan-left.”

The engineers cited studies saying U-turns reduce crashes and congestion. They added that measures such as curbs that can be driven over would ensure that emergency response vehicles could cross the median. The plan could also improve EMS vehicles’ response times, because they would be able to use the BRT lanes.

5 alternative ideas
In response to these concerns and more, CATA offered alternatives.

Idea 1 would move BRT lanes from the center to the curb. This would allow for direct left turns, but could inhibit right turns.

Idea 2 would eliminate designated lanes, so BRT buses would share lanes with normal traffic. This would reduce the project’s efficiency and eliminate benefits to EMS vehicles.

The engineers called Ideas 3, 4 and 5 the “capitol to campus” option, because they shorten the BRT route. Idea 3 would run from the Capitol to the “Delta triangle” bordered by Delta Street, Grand River Avenue and Michigan Avenue.

Idea 4 would end at the turnaround outside Berkey Hall and the Broad Art Museum.

Each ideas has opportunities and challenges, Kelsch said.

“The goal is also to hear back, to feed those next steps,” Alexander said.

Many voiced concerns and objections to the project during the short discussion portion of the meeting in the Hannah Center and after the meeting concluded.

“My understanding of the original conversation back in 2009, the goal was to relieve congestion,” said Roberta McCall, a retired Ingham County resident. “I look at this, wondering ‘how will this relieve congestion?’ I don’t think it will.”

McCall, who is visually impaired, had previously raised a concern that she would have difficulty using the BRT and was told she could call Meridian Reddi-Ride. “It was sort of a glib answer that really hit a sore spot,” Armstrong said.

With Ideas 3, 4 and 5, McCall said the BRT would become less attractive because it would require a transfer to get to Okemos. “If I have to transfer, you bet your booty I’ll be doing something else,” McCall said.

Some people advocated for the BRT project. Representatives of Capital Area Transit Supporters supported the BRT concept but not one idea in particular.

“It’s a really big step forward for safety, connectivity and aesthetics,” Chris Buck, an Ingham County resident said. “The corridor needs to change. I applaud CATA for seeking funding to help revitalize this spoke of the mid-Michigan wheel.”

Buck cautioned that the community needed to think ahead, planning for a growing community. He pointed to the growth in housing and business along the corridor.

“If this town doesn’t become ‘cool,’ businesses will have trouble drawing talent, they’ll move their headquarters, and then we’ll become a ghost town,” Buck said. “‘No’ is not a solution to what needs to happen in the next 10 years.”

Jim Secor, an Ingham County resident came, like others, to see how CATA would respond to suggestions. He said he was disappointed with the atmosphere of the meeting.

“I feel the people here really only want to make speeches, and as a citizen, I am embarrassed with the disrespect shown to the (CATA) employees. I think the shrill naysayers are few. They certainly have the right to speak but not to drown out everyone else.”

People came to the Allen Neighborhood Center and questioned the project’s price tag of $100 million to $145 million and the safety issues. The graphic shows a comparison of the construction costs of the current plan and the presented ideas, in millions of dollars. The engineers presented the costs as a range, indicating that the actual cost should fall between the given numbers.

One question submitted in writing asked how the project would allow for fire trucks and ambulances to navigate lanes. A concern of this was that the length of a fire truck’s axle would not allow a fire truck to perform a U-turn without riding over a curb with the current proposed project. The question expressed concern that, should a fire truck be forced to ride over a curb, the axle would bend. DeVries, pictured at right, said he did not know the length of local fire trucks and that he would follow up.

Another question asked, “Is CATA working with the city of Lansing and or East Lansing to have dedicated bike lanes or vice versa?” A man in the audience took the question further, saying he did not see any indication of bike lanes in any of the maps given for the five options.

In places, Grand River Avenue would be reduced to a single lane, which raised concerns as to whether there would be designated bike lanes there.

Kelly Rossman-McKinney, CEO of Truscott Rossman, said “Any of the questions that are asked that we’ve not given enough detail to, there will be within about a week or two more comprehensive answers.”

CATA CEO/Executive Director Sandy Draggoo said bus rapid transit was chosen over light rail, which she said is “extremely too expensive” and doing nothing. The graphic shows a comparison of the annual net operating and maintenance costs of the current plan and the presented ideas, in millions of dollars. In other words, it shows the increase in the annual cost to operate and maintain the route, up from the the cost of running Routes 1, 4 and part of 48. The engineers presented the costs of Idea 3, 4 and 5 as a range, indicating that the actual cost should fall between the given numbers.

The hearing at the Okemos Masonic Center on Hamilton Road was disrupted by audience members with conflicting views.

The main concern in Meridian was whether the BRT would prevent direct left turns. The Michigan left proposal was said to impact businesses by forcing people off the Grand River corridor.

The other main objection was about the replacement of the Route 1 bus by the BRT. People said this route is never crowded and said there is no need for BRT. One question was, “can’t we improve travel times by reducing the number of stops on Route 1 rather than building a BRT?” This concern raised a robust reaction from the community.

The answer was that simply reducing stops would not speed travel times for both auto and bus traffic. One of the main reasons behind the project; is reducing travel time and improving traffic flow.

Some were concerned about access to the Frandor Shopping Center in Lansing. Frandor is an important destination for people along the Michigan Avenue/Grand River corridor. The BRT would eliminate direct access to Frandor, they said.

The meeting became more heated and hostile as people said traffic engineers and the moderator were not answering their questions in depth. Police stepped in to end one argument.

CATA officials said they would take all the information they received from the three public meetings and further adjust the BRT project.

Nic Antaya is a student at Michigan State University pursuing a bachelor of arts degree in journalism, with a concentration in visual communication. Antaya is also an assistant photo editor at The State News.