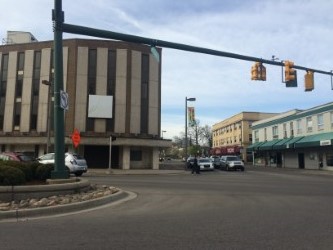 Entirely East Lansing
Gabriella Galloway
East Lansing residents today would have a hard time recognizing Grand River Avenue if they were to look back at pictures from its beginnings. The once Indian-made trail has been home to movie theaters, department stores, and a number of restaurants. Ray Walsh, is the owner of Curious Book Shop on Grand River, has seen many changes on the street since the 1970s. “Many of the restaurants have become restaurant bars because it’s just more profitable to have a liquor license,” said Walsh, a 1971 Michigan State University Graduate whose shop has been
at its location since 1973.

Ray Fortin, a 1988 MSU graduate, from 1988, said he recalls more “mom and pop” stores and restaurants, whereas now he notices a majority of national brands on Grand River.

The reasoning behind this is with the development of the university and the city itself, rent has gone up for these buildings, squeezing out small businesses, said Walsh.
Fortin said he and his roommates would love to eat at Taco Bell and The Peanut Barrel. For late-night food, rather than getting a No. 1 at Conrad’s, The Dog Pound was the place to go, said Fortin.

According to Alessandra Caccamo, a 2012 MSU graduate, “the best place to be on Grand River was Lou and Harry’s.” She recalls their early Saint Patrick’s Day brunch and how packed it always was on game days.

Lou and Harry’s changed location in 2012 but just moved back to Grand River this past month.

This location was previously home to Jacobsons.Walsh also mentioned that people in East Lansing are more likely to go to the malls now for their clothing. However, Grand River was once home to a department store in the ‘70s called Jacobson’s, which moved in the year 2000.

Walsh said he notices there are not as many choices for clothing nowadays but plenty of places for fans to get their MSU memorabilia.

If they had a sweet tooth, Fortin said they would go to Melting Moments, which no longer exists on Grand River, for cookies and ice cream. A difference he noticed is how expensive getting a treat is now compared to back in the ‘80s.

Fortin recalls Country Market as the grocery store that everyone went to. “The coolest thing there was they had a pop machine and they advertised ‘pop while you shop’ so you could go there and get pop and drink it while you got all your groceries,” said Fortin.

Another change Caccamo recalls is the J2 Tanning Salon was once occupied by Snap Fitness.

“Grand River has undergone significant changes from what it used to be. Some of the older buildings have deteriorated and hopefully will be replaced by gleaming new construction,” said Walsh. According to Heather Pope, community development analyst, and the city of East Lansing website, plans are in the works with Park District Investment Group LLC to fill vacant buildings. Spaces such as 100 West Grand River, which used to be a four-story bank building, and 124 to 140 West Grand River, which was used as an office and residential space, will soon be filled.

These vacant buildings will be torn down by December and reconstructed. Plans for a hotel, residential space, and retail seem to be likely possibilities to fill this spot.

The expected costs of this renovation will be around $17,354,454, according to ACT 381 Brownfield Plan document.

“We hope there’s a great future ahead for Downtown East Lansing because of the hard work that has gone into it by both the businesses and the people who are in charge of the construction and development of it,” said Walsh.