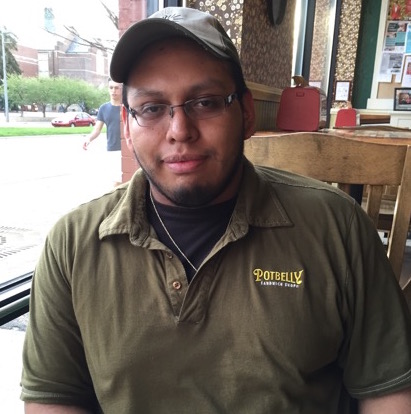 In Michigan, the minimum wage is $8.50 per hour. IN this article, several young voters who live at or close to the minimum wage talk about the presidential election.
Jose Bilar, 24, works at a Potbelly sandwich shop

“I have been following the election. It has been quite interesting.” said Bilar.

He has not decided how he is going to vote for in November yet. “There is something about each candidate I do not like.”

Bilar said that those politicians truly have influences on people’s life.
Bilar does not agree with Donald Trump’s plan to deport immigrants.

“Their opinions affect us. It also affects the business around here.”

Fast-food workers in New York are now set to have a minimum wage of $15 an hour by 2018, according to the Guardian News.

Bilar said a higher wage “will be great and we will be having a lot more money. It is true that you will have more money to spend on everything, but then cost prices will go up.”

Ashley Koepke: “You could not support a family on this job.”

Koepke is a receptionist in Glenwood Apartments, which is managed by the DTN Management company and based in Lansing.

“I was registered to vote for the election four years ago, and I did not pay as much attention as I have then for this coming one. So I watched the debates and then I go and read like things on all the candidates afterwards. I have definitely paid attention to this one more than I was before.”

Although Koepke is undecided right now, she said she has supported Donald Trump.

“I agree with Trump’s business term and people should support themselves. He is a very big supporter of big businesses and corporations. He does not agree with that if you do not get a job, then government should give you money. You should be actively searching for a job.”

Even though Koepke supports Trump, she said that she does not support him completely.

“As far as building walls and things like that, I definitely disagree with that.”

Koepke has just graduated. Her parents are supporting her. In her eye, education plays an important role in our society.

“Education is the most important thing because our learning ability is obviously decreasing, not scoring as well as other countries,” said Koepke.

She indicated that people should focus more on education to make sure that students earn high school diplomas.

Koepke said people who take jobs at college or high school age are usually working at McDonalds. “You could not support a family on this job. This is for people who need extra money,” said Koepke.

But if the minimum wage goes up to $15 an hour, Koepke said she thinks fast-food workers could save up some money and get their kids food and clothing. But in a different circumstance, she does not think that it is necessary for fast-food workers to earn $15 per hour.

If the minimum wage were raised to $15 per hour, “I think it is pretty crazy because that way expenses will go up for everyone as far as food costs, gas costs, living costs, and at the same time you have people that actually work hard to get paid,” said Matthews.

“I feel like that everyone should get together as far as the politicians and whoever is going to be in office they should figure out what we really need around here.”

Matthews said Bernie Sanders wants the best for people in this country, and he is doing exactly what American people need.

Kristyn Merreot: Politicians should not take more money from the wealthy.

Merreot is a receptionist at the hotel’s check-in desk.

“I am more towards Republican candidates so, no offense, I do not want to vote for Donald Trump,” said Merreot.

“I want a way that employees want to work because I want to earn the money and they do not feel like they do not need to work just so they can get money from the government,” said Merreot.

At $12 per hour, Merreot had the highest wage among the people in this article.

Merreot said politicians should not take more money from the wealthy. For example, she said, a lot of these people who are doctors work really hard for the money they get. It is not fair that they give away more money, she said.

Kelsey Hicks: Sanders “thinks that everybody deserves to be able to support themselves.”

Conversely, Hicks said, “People who work here are in their 30s or 40s. They have five kids and this is the only sources of income. They deserve to support themselves and kids even though they work here instead of a hospital.”

Hicks makes less than $10 an hour.

Hicks said she supports Sanders because some people think others working in fast food do not deserve the same benefits and pay that other people do, such as a doctor or in more prestigious careers.

“But he thinks that everybody deserves to be able to support themselves and live in a full life,” said Hicks.

“You should be working a full-time job being paid around minimum wage and not have to worry about the cost of living and just be able to survive.”