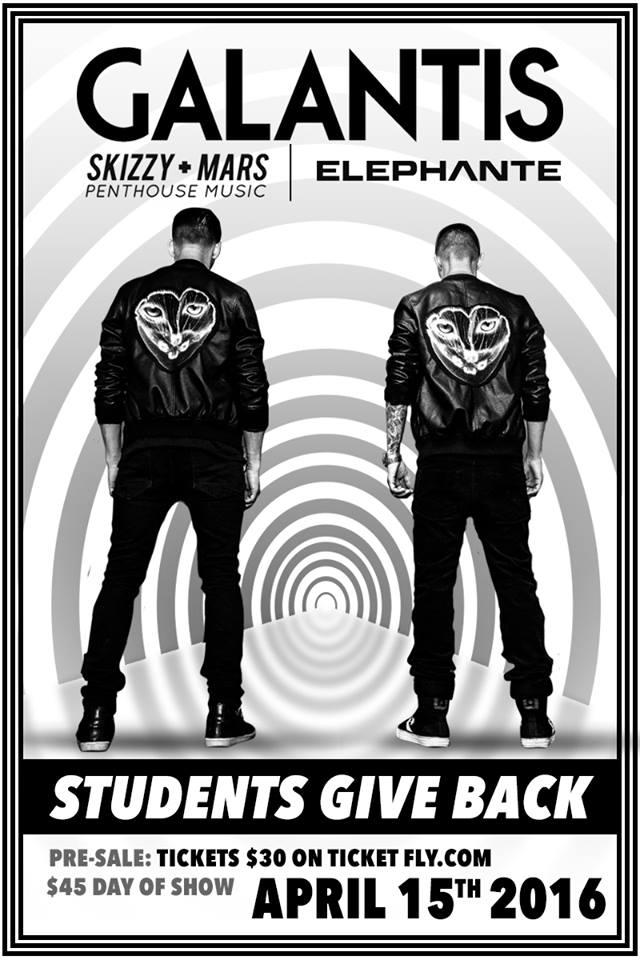 The stage is set for DJ group Galantis to headline the first Students Give Back Benefit Concert, held by the Interfraternity Council.

“I always had this kind of vision of an event that brought you know students together and it was just a fun time.”

All the proceeds go to help the Flint water crisis. So far the event has raised around 3,000 dollars. Organizers say they were hoping for a better turnout. Around 2,000 of the 5,000 available tickets have been sold.

“Honestly I thought we would sell more because I mean we have Galantis, Skizzy Mars and Elephante which is a solid lineup.”

The IFC used money- including fraternity dues- it saved over the years to pay for the event.

“Skizzy Mars, his price range is depending on size of the audience, is around 15-20,000 thousand”

Lassen says it was a risk to put on the concert.

“We really wanted to focus on a budget that could get us the best artist, for the best price, then add in perks such as an Uber code.”

Sarah Chapekis has been working with Uber to transport people to and from the event.

“I was worried about there being enough rides here the night of the event.”

“So financially is it working out as well as we hoped? No, but in every other aspect yea it is working out very well.”

Kelsey Banas is a senior, majoring in journalism at Michigan State University. From Long Grove, IL, Kelsey has grown a special interest in entertainment journalism and plans to move to Los Angeles after graduation in May of 2016. Previous to Focal Point, Kelsey has interned for Star 105.5 radio station in Crystal Lake, IL, as a Promotions intern, WLNS 6 News in Lansing, MI, as a News intern, and then ultimately becoming a Development intern at Magical Elves Production Company in Los Angeles, CA. Getting involved as much as possible, Kelsey created the VIM Report for VIM Magazine, the student-run fashion, beauty and lifestyle magazine on campus. Kelsey brought the magazine to life in YouTube videos consisting of fashion trends and talking to people on the street of who wore it better. She also was able to write and blog about her internship experience at Magical Elves for VIM Magazine. Kelsey anchored and reported for MSU&U Telecasters, a student-run news program reporting on the most up-to-date events and news happening at MSU and in East Lansing. From interviewing College GameDay’s DJ Babi Mac or Late Night Host Seth Meyers, her experience and diversity has continually grown Kelsey into the journalist she is today.