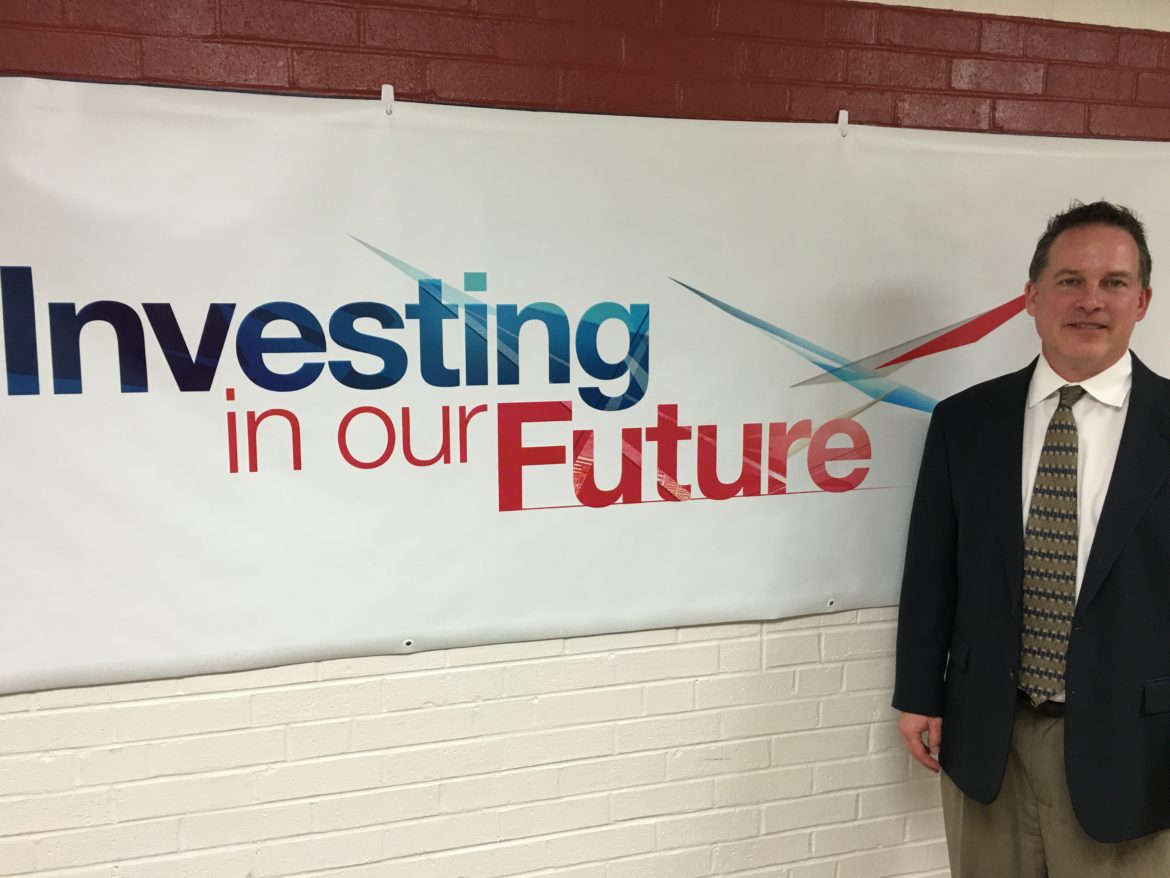 Superintendent Ronald Drzewicki stands in front 'Investing For the Future', the May bond proposal

MASON, Mich. – A Mason School Board committee was trying to decide if adding an extra section of kindergarten would solve the overcrowding issue.

During Tuesday’s Community and Staff Relations Meeting, the board discussed the overcrowding and addressed how they could proceed.  All three of the elementary schools will exceed capacity for the 2016-2017 year; there will be 484 students for a building designed for 405, according to Mason Public Schools. With 240 kindergarten students, and three sections at each of the three schools, that accounts for roughly 27 students within each section. With numbers this high, it raised the question if the board should add another kindergarten section.

“Lower kindergarten [student] numbers holds value,” said Superintendent Ronald Drzewicki. “We recognize that and we are going to do what we can in our budget to facilitate lower class sizes if we can.”

Board member Laura Fernger agreed it was something that needed to be looked at.

“I think we need to look at the numbers to consider the options,” said Fernger.

If the board voted to add a section, it would take two to three students from each section.

In addition, Drzewicki said the district would have to finance a salary, employee benefits, retirement plans and the space for the section. Since enrollment has never been this high, the Michigan Education Association has no guidelines to follow in regards to adding an extra section. The choice would be entire the board’s.

Drzewicki went on to state it would be placed at North Aurelius Elementary, and a room would be created for a suitable environment for student learning. However, the extra section and its room depends on whether the bond proposal passes on the May 3 ballot. The roughly $80 million bond would cover improvements on infrastructure, classroom technology and security.  The teacher’s salary, however, comes out of the yearly budget.

“I think they should have used the building they converted into offices and our teachers have not had raises in a long time.” said Carl. “I think there may be other areas they should put money into before new schools.”

However, Carl does note the influx of young families with kids in schools. She went on to say that with the new neighborhood of the Gardens, located on College Road south of Holt Road, there could be more young families in Mason. Because of this, she said that the upcoming bond proposal that would fund the new construction, technology, safety and staffing may pass due to parental desire to invest in their children’s future.

Carl went on to say she recognized the importance of early childhood development.

“It is such a critical time for kids so I think the students and staff would benefit from an extra kindergarten teacher,” said Carl.

Voters will decide if any form of funding is approved during the May ballot. Until then Drzewicki said he will continue to push for the betterment of the district.

Drzewicki said he believes that the community will want to take care of the schools.
“The community wants to take care of their schools,” said Drzewicki. “They want to make sure their kids to have the quality of education that they deserve. They recognize we have challenged and are willing to support it because good schools make good communities.