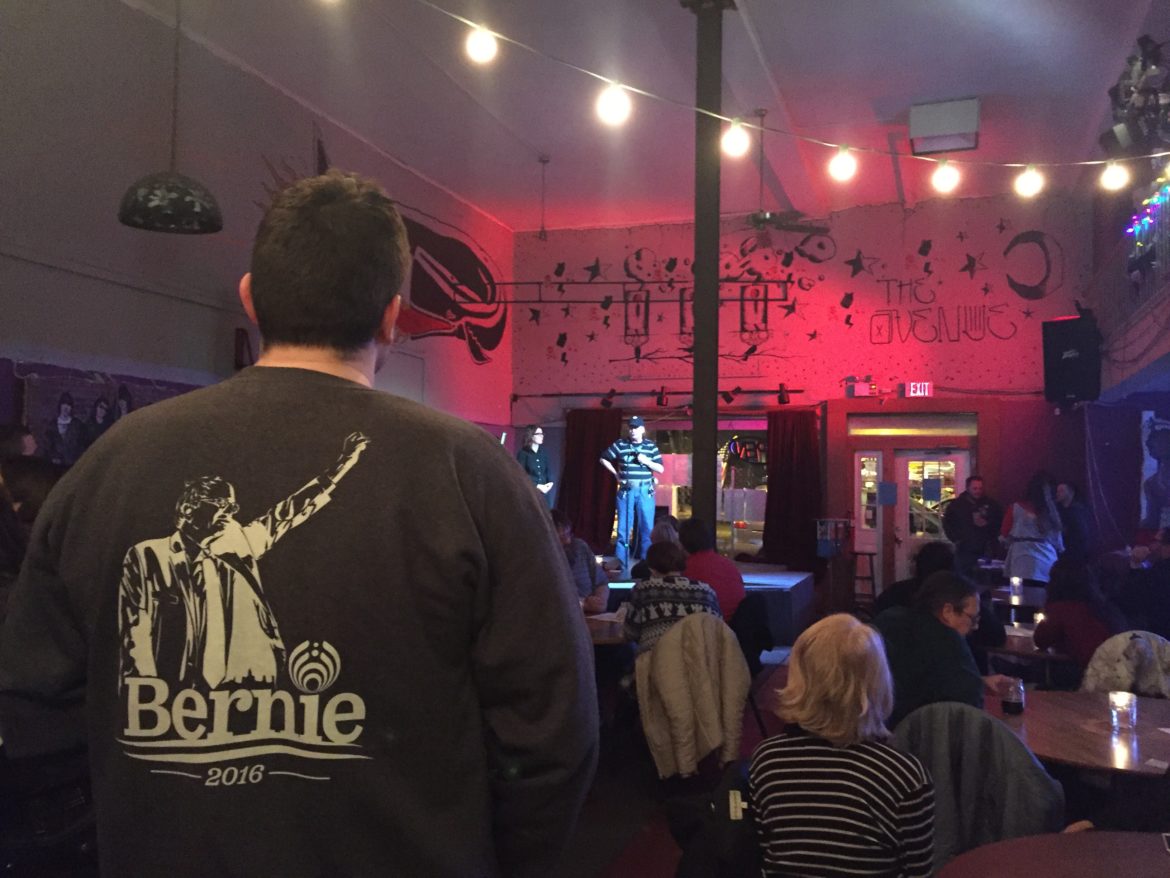 Students pass by The Rock on Farm Lane and see a blue tent with a group of people standing out front. One of them stops a student walking by and says, “Hi we’re Students for Sanders, are you registered to vote?”

Students for Sanders East Lansing is a student political organization at Michigan State University. With bi-weekly meetings, weekly phone banking events and voter registration drives, the organization aims to bring attention to presidential candidate Bernie Sanders and to get more students involved with the election.

Students for Sanders president Aaron Stephens established the organization in August 2015. He, along with the other president Brieann Sauer, set up a booth at Sparticipation 2015 and gathered 700 students who were interested in the organization. Of those 700 students, 100 showed up to the first meeting, and Stephens was overwhelmed with the turnout.

“It’s just amazing to see the amount of people who were formerly not involved, be leaps and bounds more passionate than I have ever seen before,” he said. “I’ve never seen this many people just come out and be a part of something that’s so much greater than them.”

A Bernie Sanders supporters and volunteers listen to speeches at Sanders rally at The Avenue Cafe. Photo by: Rene Kiss

“We just like to provide an environment where we can help people get over their nerves about talking to people on the phone or help set up the phone banking account,” Stephens said.

The new campaign office is located at 2722 E. Michigan Ave., Suite 101 in Lansing, and it held its grand opening on Wednesday Feb. 17. It will be open daily from 9 a.m. to 9 p.m. for organizations, volunteers and the public.

The day before office opened, members from Students for Sanders went to The Avenue Cafe in Lansing for an organizing rally. There wasn’t an open seat in the venue.

Communications director of Michigan for Bernie Sanders Kelly Collison spoke at the event about being a part of the campaign.

“I don’t have a lot of my own hope,” she said. “But my only hope is for my daughter to have a leader who will make her a better future. Bernie Sanders is that leader, and I am so happy to help his campaign and be a part of that.”

A packed crowd at The Avenue Cafe listen to Bernie Volunteers at rally. Photo by: Rene Kiss

Rory Womack, member of Students for Sanders, shares the same feelings about being a volunteer for a political campaign.

“I love what I do with Students for Sanders,” Womack said. “I have people come up to me and give me hugs when they hear I’m part of the Bernie campaign.”

Stephens has been involved with politics since he was 14 years old, and as soon as he could register to vote, he registered. He says voting the most important thing a U.S. citizen can do, which is why Students for Sanders holds voter registration drives.
“We held one every week on Fridays for five months in different locations on campus,” Stephens said.

The week before the Feb. 8 registration deadline for the Michigan Primary, Students for Sanders held five voter registration drives in a row. The organization registered 200 students in that week and about 1,500 overall.

“Bernie for President” sign outside of The Avenue Cafe’s front entrance. Photo by: Rene Kiss

“If I were to sell this organization in one sentence I would say: You’re going to meet a lot of really passionate people,” Stephens said. “If you want to just know how an election works, if you want to know how we affect our political process and if you want to actually see that you can make a difference, then you should join Students for Sanders.”

The organization holds meetings every other Tuesday at 8:30 p.m. in room 137 of IM Circle. More information about its events can be found on the “Students for Sanders- East Lansing” Facebook page.