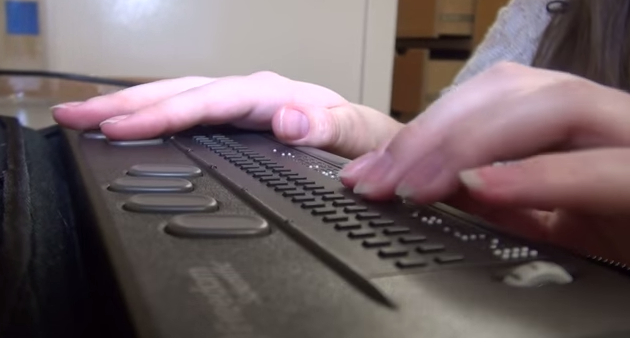 While being blind can make schoolwork difficult for her to complete, new apps and technology have made it a little easier.

“A braille display basically connects with blue tooth to the iPhone and it displays braille,” she says.

With her braille display, Castor doesn’t just have to listen to an automated voice read her textbooks. She can have the words converted to braille and read it with the touch of her own fingers.

“When I’m reading something in braille, I can comprehend it better,” Castor says. “I’m able to understand.”

To help her understand even more, MSU’s Resource Center for Persons with Disabilities have converted several of her textbooks by hand.

“That little, tiny thing that maybe seems so easy to you, may not be so easy to them,” Liza Reynolds, an RCPD employee, says.

RCPD employees, like Reynolds, are also there to show students what apps are available and can help with their specific needs.

“Normally, I don’t see that student anymore and they were able to accomplish what they were having trouble with all on their own,” Reynolds says.

Al Puzzuoli, an RCPD information technologist, says a lot of students don’t even know about the RCPD and the resources they provide.

“If the general students knew, they could point it out to students who needed it,” Puzzuoli says.

While students can get the accommodations, Castor says, it’s important to reach out and get the help.

If you think you may need some extra assistance, you can visit the RCPD in room 120 at Bessey Hall.