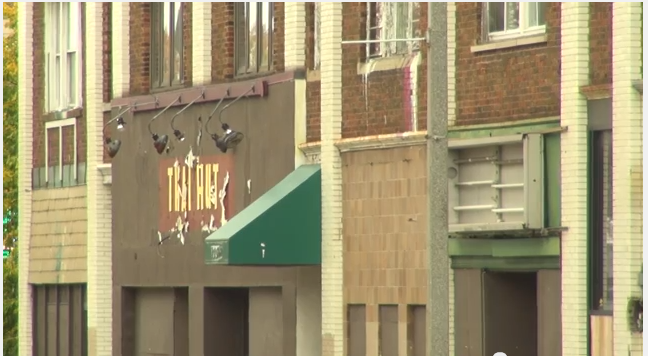 East Lansing buildings on the corners of Grand River, Abbot, and Evergreen roads could soon be getting a makeover. In the November election, East Lansing residents will vote on the proposed park district plan to redevelop the land, which has vacant for more than ten years. The vote is to authorize the sale of land from the city, to a  developer.

Darcy Schmitt is the Zoning and Planning Administrator for the City of East Lansing. She hopes the proposal is passed.

“Having more housing in the downtown really helps the vitality of a downtown,” she said.

In addition to both student and non-student housing, the proposal plan includes building a hotel, office and retail space, and several parking lots.

“That makes our community not just an evening community, or a daytime community, but rather an all day community so that these businesses can thrive,” Schmitt said.

But not everyone is citing yes. East Lansing resident Chris Root is against the plan.

Root said the wording of the proposal on the ballot is another reason why she is voting no.

“You could write it so that it says, do you want to authorize the sale of this property for “X” purpose, but what they did instead was to say, will you authorize the city council to sell it if they decide to? But it’s completely open ended,” Root said.

Schmitt said she encourages citizens who plan to vote no to speak up, in order to find a solution for everyone.

“What the developers have on the table will give people an idea of the direction this proposal is going. If they are completely against that and they don’t feel that the modifications of this development can go forward, they should come forward to the meetings and express that,” she said.

A similar plan for this area was proposed in 2008, but it expired in 2012 after the development company coolant come up with enough money. Schmitt said that won’t be an issue this time.

The proposal needs 60 percent of voters to vote yes for it to pass. If approved, construction could begin as soon as this Spring.