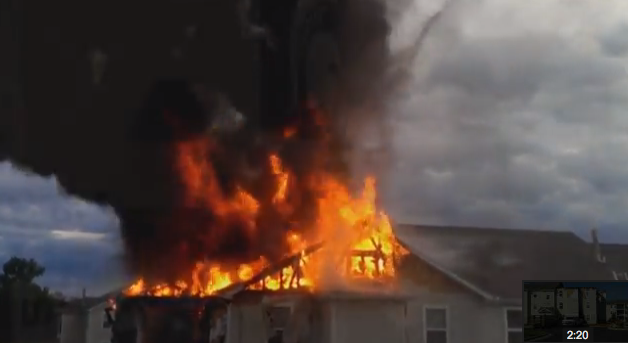 As black smoke filled the air, MSU students living in Chandler Crossings building six could only hope for the best.

Laura Armando is a Michigan State Senior, and one of 36 students who had to evacuate.

“I thought someone just left the burner on, or something like that. I thought it was funny. I started Snap-Chatting, and all of a sudden, I look over, and the entire roof is in flames,” Armando said.

Armando and other affected by the damage needed a new place to stay, so Chandler Crossings management called MSU grad student Shireen Korkzan, who had a four bedroom apartment to herself.

“I got the call saying Hi, Shireen Korkzan, there was a fire in building six, a few residents will be moving in within a few hours. I said: what??, she said. ” But despite the short notice, Korkzan was happy to help. “I just totally stocked up on groceries, and just bought random stuff, even stuff I wouldn’t eat myself, because I didn’t know. Do they have allergies? Are they vegan?”

Adam Martin, manager of Chandler Crossings, said his biggest concern is always safety. “As soon as the fire chief cleared that everyone was out of the building, no one was hurt, nothing like that at all – A. I was relieved, but then my mindset goes to management and handling the students who were displaced.” Martin said his well prepared staff is the reason why affected residents had new homes within 12 hours. “Like I tell my staff, if you do the little things everyday, then the grand picture isn’t so grand,” he said.

Many students lost critical belongings, such as laptops, drivers licenses, and passports. But since Armando’s apartment was on the first floor of the third floor fire, she was only faced with smoke and water damage, and was able to retrieve most of her things.

“That was a really lucky part of the situation,” Armando said. “But it still doesn’t make me comfortable or anything because I really worry for those people who got their apartment burned to the ground. That could have been me.”

Armando said she doesn’t know if and when she will be allowed back in her apartment, but the support has been overwhelming.”My friends who let me borrow blankets, pillows, clothes, shoes, it was amazing to see how much friends can do for you,” she said.

Residents are being updated from the management company through calls, emails, texts, and Facebook posts.