GRAND LEDGE – The weather warming up brings a bigger problem than just slushy shoes – potholes. Michigan is well known for roads in poor condition. Jenne Street, the Meijer parking lot and the Quality Dairy parking lot are major problem areas for potholes in Grand Ledge. Blair Ballou of the Eaton County Road Commission said it  is easier to talk about roads in good condition since there are so many that are not. The two Grand Ledge roads Ballou said that were the least problematic in Grand Ledge are Willow Highway and Broadbent Road due to recent resurfacing.

“There used to be a sink hole that would need to be patched often on Willow Highway,” Grand Ledge resident Eric Beadle said. “It was not remedied until the recent repaving of Willow Highway.” 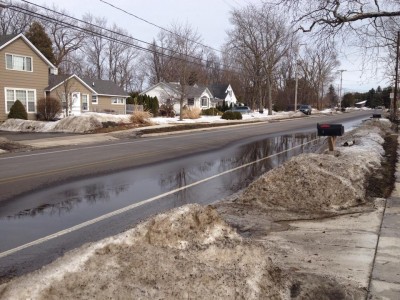 Willow Highway in Grand Ledge used to be riddled with dangerous potholes before the city resurfaced it. Photo by Ariel Rogers.

“It jarred me enough that I didn’t realize anything was wrong, but about a quarter of a mile later I could tell my car was messed up,” Houle said. “I pulled over at the GoLo [gas station] and realized that I had ruined the rim because it was so shredded.” 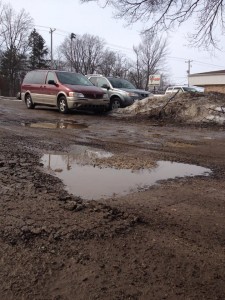 A large number of big potholes in the Quality Dairy parking lot are dangerous obstacles to drivers. Photo by Ariel Rogers.

“The state government funds road repair, and I’m sure with Michigan weather being what it is, that is not cheap,” said Grand Ledge resident Austin Gullett.

Gullett is right. The Michigan Senate just approved $100 million to go toward road repairs, and the House is looking to get more.

“Michigan weather is awful for roads, but it’s a part of life here,” Gullett said. “Imagine having chronic back pain for your entire life. Eventually you learn to live with it. It still hurts and is still a major inconvenience, and the brief periods of relief do not go unnoticed. You accept it as a part of your life that just always needs to be dealt with.”

To provide residents with information, the Michigan Transportation Team created a website to encourage Michigan residents to contact legislators to increase funding for damaged roads. There is also a contest on the website for four $500 prizes that will go toward car repairs caused by potholes.

Contrary to popular belief, potholes are not a major cause of car damage. Tony Ciaramella is a customer manager in the service department at Sundance Chevrolet in Grand Ledge and sees usual winter repairs.

“Our influx of repairs just because of potholes is not tremendous,” Ciaramella said. “Repairs we see more of are suspension work and ball joints breaking. These problems are often caused by speed bumps. ”

Ballou said that the Eaton County Road Commission is going to focus more on repairing high-speed roads, as they pose higher safety risks.

“Residential areas are less likely to have a safety problem due to lower volumes of traffic and slower speeds,” Ballou said. “In the past week, and for the next three weeks, we’re going to concentrate on the large holes and the 45 and 55 mph roadways.”

Ciaramella said a lot of the damages that cars undergo are due to poor maintenance and upkeep by the owners.