LANSING- As the capital city of a major beer state, Lansing offers a taste of Michigan’s craft beers in many brewpubs and bars.

Michigan ranks fifth in the nation for having the most breweries. Nonetheless, Lansing lacks a large-scale brewery.

Editor’s Note: See bottom of page for slideshow about the brewing process at the EagleMonk Pub.

“Lansing is the biggest city in the country without it’s own brewery,” Mark Sellers, owner of Barfly Ventures said. “Everyone’s afraid to be first, but Lansing’s ready for a brewery.”

Plans are underway for a new HopCat brewery in nearby East Lansing, Sellers said. Barfly Ventures is the holding company that owns HopCat, Stella’s Lounge and The Viceroy, which are bars and restaurants in Grand Rapids.

The HopCat in Grand Rapids has 48 craft beers on tap; none of them are the big name brand beers like Miller Lite or Bud Lite.

For local craft beer lovers, the new HopCat brewery is great news. In the Lansing community, it is about more than just drinking good beer, said Danielle Casavant, a Lansing resident and craft beer enthusiast.

“It’s the environment: the people and how you enjoy it,” Casavant said.

People who only drink craft beer made in Michigan usually want a quality product that also supports the local economy, she said.

Michigan has 120 breweries, 141 beer distributors and 16,744 retail establishments selling beer. The beer industry generated more than $2 billion for Michigan’s economy, according to the 2012 Beer Institute Economic Contribution Study.  That means Michigan has the fifth largest state beer economy in the nation. With that much money invested in the beer industry, it makes sense that many cities in Michigan have very involved beer communities.

These beer communities are made up of beer enthusiasts of all kinds, from people who frequent the local bars to those who brew from their own homes. In mid-Michigan, there are many bars that serve only or mostly Michigan craft beer. This makes the area suitable for beer enthusiasts to create a close-knit community, Casavant said

“A lot of it is about camaraderie,” Casavant said. “People like to talk about beer.

With so many local restaurants and pubs serving Michigan beer, one question has remained a mystery to Lansing beer enthusiasts: Why aren’t there any breweries here?

In April 2012, the only major brewery in the area, the Michigan Brewing Co., was evicted from its Webberville location when it was unable to make loan payments for the property the brewery was on. It had been open since 1996.

A few microbreweries remain in the area, but no large-scale breweries.

The EagleMonk Pub and Brewery serves beer brewed at the establishment. Photo by Ashley Weigel

Local bars and pubs like the Soup Spoon Café, Midtown Beer Co. and EagleMonk Pub and Brewery create an opportunity for people to become a part of beer affiliated groups, such as mug clubs, which are memberships to a bar where the member uses a mug of their choice like a membership card and usually get special deals on beer. When people return to these bars and pubs on a regular basis, a community of people with similar interests starts to form.

With so much support for local breweries and those of Michigan, a new podcast has been made to celebrate the many brews this state has to offer. Craft beer enthusiasts Brandon Manson and Tony Huff who wanted to share with the world “Michigan’s greatest natural resource,” created The Michigan Beer Show, a podcast about the many varieties of beer brewed in Michigan. The Michigan Beer Show started in March 2013. The podcast will be broadcast live from the Midtown Beer Co. in a collaborative effort to bring more business to the restaurant and Michigan breweries.

“The whole industry in Michigan really is predicated on people supporting each other,” Manson said. “It’s a really supportive community.”

The Michigan Beer Show had its first live broadcast on May 9. You can listen to one of the podcasts here.

The crew of the Michigan Beer Show poses after their first broadcast. Photo by Ashley Weigel

Editor’s note: This slideshow shows how the EagleMonk Pub and Brewery brews beer. Click the information button to see the steps written out. 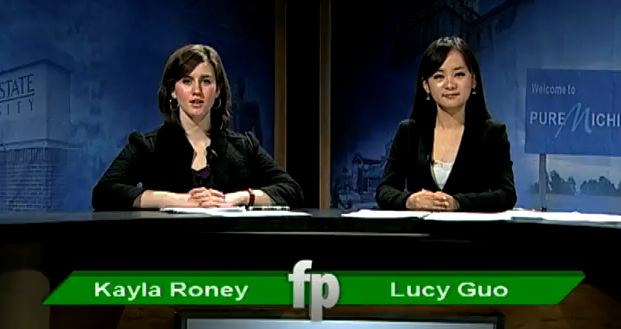