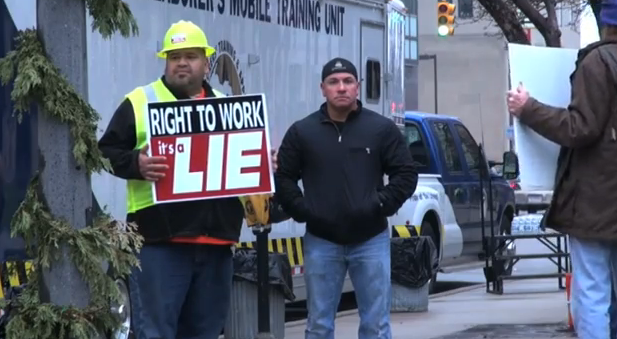 It’s quieter on the Capital Steps now, but Union Members are making plans for lawmakers’ return next week.

“We’re working on mobilizing workers and getting them here, they kind of shut our voices off yesterday and didn’t allow us into the capital, so we’re mobilizing to have our voices heard on Tuesday.” said protester Scott Brown.

On Friday, few protesters were looming and police security was at every entrance.

“Ultimately, we hope the gov. thinks this over, over the weekend and listens to our member and does the right thing, and veto’s this legislation and asks the legislature to take more time and look at what the ramifications would be for our state and for our people.” said protestor, Mark Schauer.

But across town in the Michigan Chamber of Commerce building, they believe this is a step in the right direction for the state.

“At the Michigan Chamber, we agree with the gov and legislative leaders that now is a good time to take up legislation to make Michigan a freedom of work state.” said President and CEO of Michigan Chamber of Commerce Richard Studley.

Earlier this year, Indiana became the 23rd state to approve Right to Work legislation, and Studley believes following in their footsteps will be good for Michigan’s economy.

“This is a very popular topic in the business community and we think that this legislation is good public policy that it will improve Michigan’s economic competitiveness and that it will help our state create and retain jobs.” said Studley.

But Thursday, the union protestors made it clear that they disagree with this.