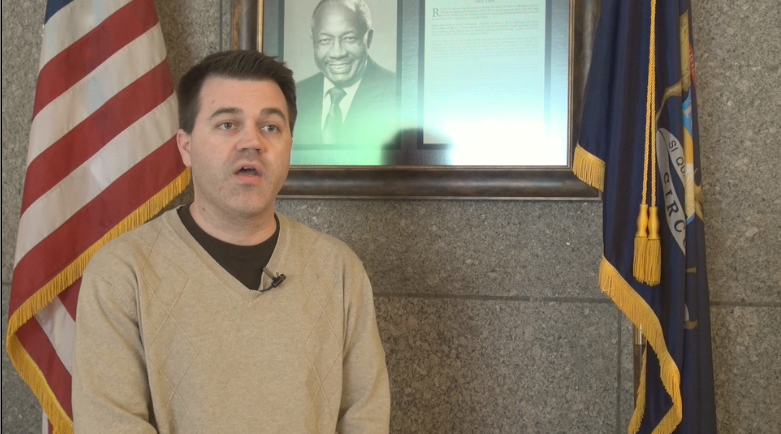 http://youtu.be/6lkFuQhEuzI
An upcoming change to michigan’s parking ticket law may mean you won’t be able to renew your driver’s license if you have more than 3 unpaid tickets, which is 3 less than the current law. why is the new law needed and what was wrong with the old one?
“what will happen if you fail to plug the parking meter?
As for Student Dusty Price, the answer should be: “the meter man will go around and they will get you right away. I am walking out to my car and they are there. Right before me.”
It’s the meter readers job to ticket violators.
William Mitchell, Captain within East Lansing Police department said that’s because we all are subject to the parking laws and are frustrating with that when we come out to our car and see the meter expire over in the wrong place and we have a ticket on our car.
As for Jordon from Okemos,  forget, no money, don’t care is the most common reasons why people forget to pay for a parking ticket.
udge of 54 B East Lasing Court David Jordon said if somebody park in the place they don’t belong, they are taking the space for you to go park there. And that’s not fair.
But now, with the new law taking effect may 16th, _the penalty could be more than just a fine or court appearance.
Judge Jordon said it was until recently if you got 6 of them than it would a restriction enter where a person cannot renew their driver?s license until they pay their tickets. And that part of the law is changed sometime in May so if you have 3 or more unpaid tickets then you would not able to renew your license next time.
Brought on  by several cities in michigan, the new law aims to collect outstanding fees while holding their drivers? license hostage they are paid up.
Fred Woodhams, spokesman for the Michigan department of the state said cities will begin to notice us that there is a parking hold on people so we are not going to renew their license. They can continue to drive on their licenses but they are wouldn?t be able to renew it until they clear that hold.
But east lansing police captain william mitchell isn’t convinced the new law is a good idea.
He thinks six was fine in that it probably is a better number. Cutting it to 3 will cause more work that wasn?t thought of on the other end, both the court system and probably the secrecy of state system then having to go through all the paper work and the suspensions and how that is going to affect down the line actually the person that is involved in this.
And captain william said more public promotion is needed so people will be aware of the new law. He said it needs to be publicized in greater detail because there is not that much information out there.