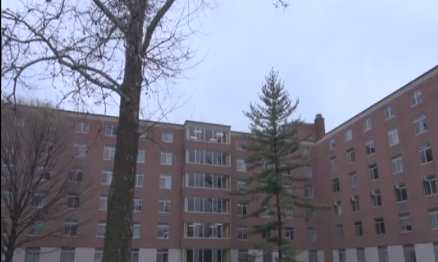 While 18-year-old Alexandra Pew was visiting friends in East Lansing, last month,  she also got to visit Sparrow Hospital after falling from a sixth floor window.

The Ann Arbor resident was playing catch in the Case Hall sixth floor study lounge around 3 a.m. when she attempted to catch a ball but fell backwards instead.  Reports indicate that she landed on her back and sustained several injuries.

MSU freshmen Emily Rice witnessed the entire incident right outside of her window.

“I heard paramedics saying ‘don’t move’ repeadely to her,” said Rice. “She was crying a lot and then they took her away on a stretcher.”

Rice said that because it rained the night before, the dirt she landed on was moist–perhaps the reason the fall was not fatal.

Rice said that it was truly an accident.

“They tested her for drugs and alcohol but she was clean,” said Rice.

Pew was taken to the hospital and underwent several surgeries. Doctors say she was very lucky and is expected to be able to walk again.