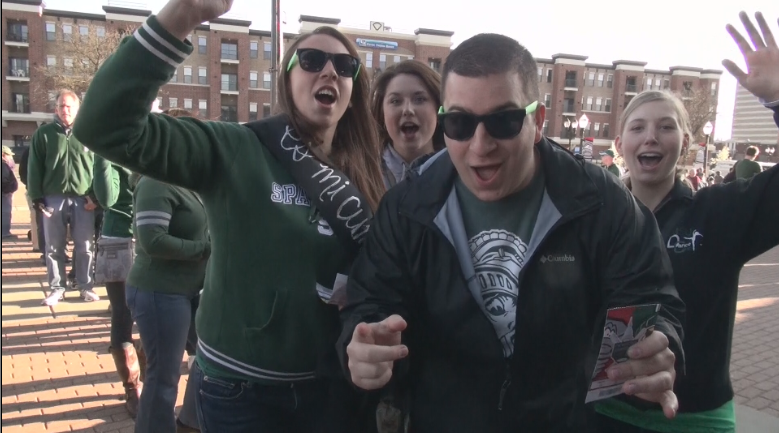 Fans flocked to cooley law stadium last week for the sixth annual crosstown showdown between the lansing lugnuts and the michigan state spartans.

Although it was almost winter temperature outside.
But the cold weather would never quench people’s heats and passion.
Chris hoag from michigan said they just want to come out and watch michigan state play with lugnuts. michigan state got a nice teem we?d like to see what the lugnuts got to share.
Chris and his wife and daughter has lined up early in the afternoon to enjoy the annual crosstown showdown between the lansing lugnuts and the msu baseball team.
He said they enjoy the atmosphere, spring is here, the baseball is here. the tigers won the day so just get out watch some good baseball.
The line still seems endless even after seven thirty p.m.
Resident jamie hardy said now she is getting really exciting right now. it?s really cool. it?s crazy in here. so many people.
With a packed house, fans are enjoying the atmosphere with their favorite ballpark treats and beverages.
And as for jamie the beer is the thing she enjoys most.
One good thing of the game is to get everyone together, not only for audiences, but for players.
The exhibition game has a different team spirit because they are both lansing teams, so it is a friendly experience.
Jamie said everyone is exciting in this environment cause everyone loves msu i think so.
And it gives the spartans an experience of playing against a pro team like the lugnuts  in front of such a big crow.
Patrick day, the general manager of cooley’s stadium said all time tickets 12997 fans, largest attendance in 17 years. absolutely incredible, great weather, awesome marketing team.
The lansing lugnuts earned a 7-0 victory at the end of the game.