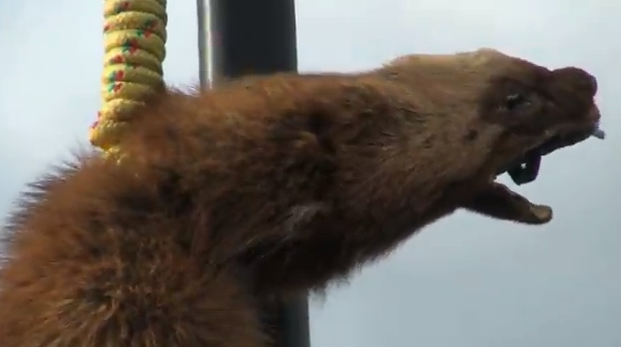 Many University of Michigan fans may be calling it a freaky four-year-in-a-row strain of good luck, but Michigan State football fans are mostly crediting the recent 28-14 win to the talent of their Spartans who donned and green and bronze at the October 15 rivalry game at Spartan Stadium. However, one loyal fan argues that it’s his furry lucky charm that gave his mean green team the extra umph to win as much as they had for as many consecutive years as they have.

“Michigan has never beat Michigan State since he started flying here,” explained Robert Hecker, the owner of the dangling wolverine pelt named Wally whom he suspends from a noose in the southwest corner of the Spartan Stadium parking lot before every U of M vs. MSU game.

“The wolverine came to me when a trapper on the Yukon River said the state lets us get a wolverine occasionally. So I told him the story of the rivalry and he said, ‘you wouldn’t want a Wolverine pelt, would you?’ and I said, ‘I certainly would!’”

The Spartans hope to take their fifth consecutive victory next year at the Big House.