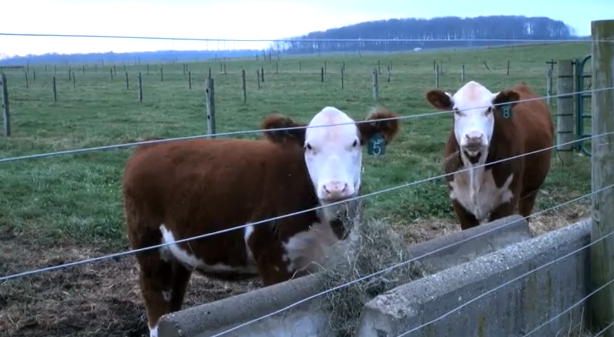 Local food is the hottest thing on menus this year. That’s according to a survey by the National Restaurant Association and this fall, MSU has started a pilot program that has brought beef from an MSU farm on the plates of MSU students in residence dining halls on campus.

Dan Buskirk is a professor of Animal Sciences as MSU and says the beef was raised at MSU and processed in Michigan.

“We harvested 10 cattle at a packing plant in northern Michigan, that beef was processed at Byron in Grand Rapids then that beef was brought back to campus and is being served through MSU culinary services this fall on campus,” Buskirk says.

Earlier this month when the beef was served in MSU dining halls, students learned more about their beef through the use of QR codes. Students were able to scan QR codes located on table tents, posters and flyers with their smart phones.  The QR codes took them to a URL site that gave students information about the farm where the beef came from, a map of the farm and an additional website to find out how the beef was raised and the diet it lived on.

Buskirk says the overall goal of this program is for MSU beef to land in local retailers and for shoppers to be able to scan 2D barcodes that will provide information about their beef.

“The overarching reason for us doing the traceability system is really to try to reconnect farmers with consumers because I think that there’s a lot of consumers that are separate from the farm and if they don’t understand how their food was produced,” Buskirk says.

Kurt Kwiatkowski is the head chef at MSU Culinary Services at. He says there is a demand for local products.

“A lot more people are concerned in this day and age, where’s my food coming from,” Kwiatkowski says.” And so when you can say it’s from local, literally right here on campus, you can go out to the farms and see them as they are being raised. That really puts them in touch.”

This year, the program will provide 4,000 pounds of local beef to MSU cafeterias.