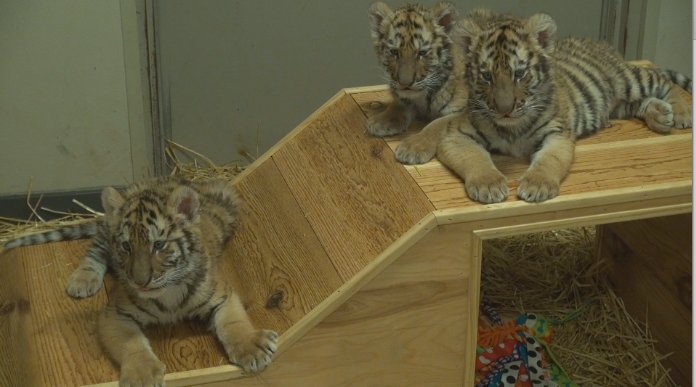 Lansing’s Potter Park Zoo welcomed three female Amur Tiger cubs to their clan of animals on September 15, 2011. Kira, Ameliya and Savelii are among the less than 500 of their species left on earth as well as part of the second litter born to the local zoo. The fist litter born six years ago included the tigress’ father. Though the arrival was long anticipated, it nearly ended in tragedy.

“Shortly after they were born they got very sick with Pneumonia, so we had to get them away from their mom. Michigan State University helped us figure out what type of Pneumonia they had and also with their early treatment,” explained Veterinarian Incubator at Potter Park Zoo Dr. Tara Harrison.

Associate Director of the Diagnostic Center for Animal Health Dr. Thomas Mullaney was stunned by the cubs’ illness, only recalling one other case ever recorded: “We did bacterial cultures and a pathological examination called Histopathology and from those examinations we identified a highly variant strain of E. coli.” Though the sickness sadly took the live of a third cub shortly after delivery, Dr. Mullaney said that if the remaining tigers had waited any longer for the treatment they received, “…the likely-hood of survival (was) very low.”

With their time spent in a nursery at the zoo, the rambunctious tigresses have climbed their way to tip-top health. They are expected to be ready to be put on exhibit in December at the soonest. In the mean time, a ‘Cub-Cam’ has been set up outside of the felines’ current lodging so they can be viewed by zoo explorers. Click here to watch them live.