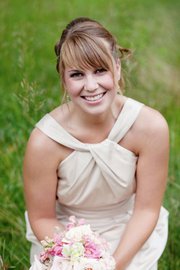 Andrea Nelson is a senior in the School of Journalism at Michigan State University.  She is pursuing a Bachelor of Arts in broadcast journalism with specializations in sports and public relations.

Andrea got an early start to her journalism career as a sports intern at WLAJ in Lansing.  Shortly after, she began contributing to SpartanTailgate.com, a website dedicated to covering MSU basketball and football as well as the recruiting of future players.  Andrea also became the assistant producer for two radio shows at WILS in Lansing and a monthly writer and Assistant Editor for SPORT Magazine.

In the summer of 2010, Andrea decided to expand her horizons by studying abroad in Europe.  She returned to MSU full of new perspectives to begin her junior year.  Andrea then became a Student U intern for the Big Ten Network, assisting in the setup, production and teardown of sports events covered by BTN.

During the summer of her junior year, Andrea was a communications intern at the House of Representatives in Lansing.  She was also a sports intern at WLNS-TV 6.  Andrea continues to intern at WLNS and the Big Ten Network and contribute to SPORT Magazine as a writer and editor.

Andrea’s goal is to be a sideline reporter and is very excited about the opportunity to be an on-air analyst for MSU volleyball, soccer and women’s basketball this year.