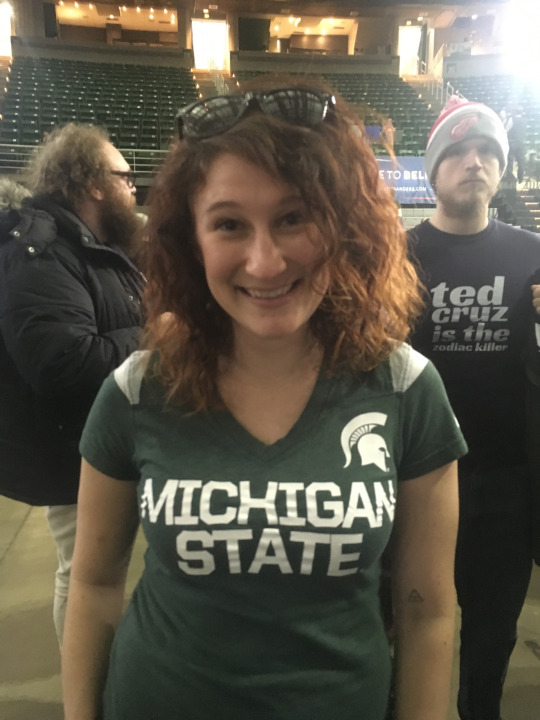 “Bernie genuinely cares about the people. He wants us to progress as a nation and become more accepting of all types of people. I just want to give him a big hug,” said Katrina McEntee from Lexington, Michigan.

The DeWitt High School girls basketball team, currently ranked 10th in the state in Class B, made a statement in its 65-32 win over Fowlerville High School on Friday.

Not only did it improve the Panthers overall record to 14-2, but it clinched them their 6th straight Capital Area Activities Conference Gold league title- which was one of their goals for the season.

DeWitt coach, Bill McCullen, looks on in the third quarter.

The Panthers ran out to an early lead and did not stop there.  At the end of the first quarter, DeWitt had outscored Fowlerville, 21-7.  Dena Droste, a fourth-year varsity player, led all scorers with 15 points. Three of those 15 points included a thrilling, buzzer-beating three-point shot leading into halftime.  DeWitt’s tenacious defense held Fowlerville to four points in the second quarter, making it 36-11.

Early last week, Droste committed to Kent State University to play basketball next year.  With seven seniors on the team, including Droste, Coach Bill McCullen stated that his senior-oriented team has benefitted them, leading to their success.

“Senior leadership and team chemistry have always been key factors in our team’s success,” McCullen said.

Some teams will become overconfident when recognized as one of the best around- but not this team.  “It is a nice honor to be ranked in some of these publications, but the girls would probably tell you that we very seldom ever talk about it. Our mentality has always been that we would like to be considered one of the top teams in the state in Class B at the end of the year,” said McCullen.

“Some goals we set as a team were to win the league and beat some major opponents,” said senior leader Hannah Acre.  She also spoke of the importance of the game against Fowlerville.

DeWitt had beaten Fowlerville by 34 points earlier in the season, but this game was at Fowlerville High School, and against a team that has improved drastically over the past couple of weeks.

“It was the game that would secure our sixth straight league championship trophy and whenever a game like that arises, no matter who you are playing, it is hard to come out without some excitement and energy.”

Acre is a third-year varsity player and mentioned how her experience has helped to motivate her team.

“The main pressure just comes from making sure that the team is on track and we’re doing what we need to do to be successful.”

Acre paced the Panthers with 11 points in the win over Fowlerville.  DeWitt’s next game is against Eaton Rapids on Feb. 18 at home.  To view the DeWitt Girls Basketball website, click here.